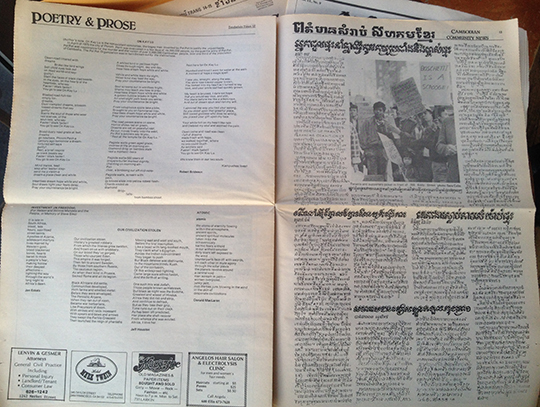 Before many San Francisco residents traded their newspaper subscriptions for Internet media, a dozen monthly papers covered the beat of the city’s distinct neighborhoods. Nine of these papers, whose heyday came with radical changes in the ’70s and ’80s, are being digitally archived by local historical organization Found SF.

“The papers all have their own personalities,” said Found SF organizer LisaRuth Elliott. “You get a sense of even how those change over time too, whether it’s a hard hitting article or it’s talking about the evolution of how the street businesses changed in Noe Valley. Archiving these papers opens up the gates for all the stuff we don’t know, and that you want to find out about, in San Francisco.”

Over the course of six months, Found SF volunteers will archive two decades’ worth of content from papers published throughout the city — the Noe Valley Voice, Tenderloin Times, Visitation Valley Grapevine, Richmond ReView, Potrero View, the New Fillmore, El Tecolote, North Mission News, and the Glen Park Perspective — in partnership with the Internet Archive and San Francisco Public Library. Since beginning the project in January, Found SF has scanned over 200 issues and tagged each with searchable keywords.

While several of the papers have come and gone, the publication that inspired the project is still going strong. Born from 1968 riots at San Francisco State for relevant ethnic education, the Mission’s El Tecolote was founded in 1970 as a bilingual paper dedicated to social activism. The paper made great inroads in the mid-’70s fighting for equitable health services, such as a bilingual emergency phone system, while covering Latino arts and civil wars in Nicaragua and El Salvador.

“We started El Tecolote to fill the gap of the mainstream media, which wasn’t covering this neighborhood with any real consistency; if it did it was often times negative news,” founder Juan Gonzales said. “The mission was to really be a voice for the neighborhood and hopefully move the spirit of organizing ahead to make some social change.”

In addition to taking a hard line on local politics and immigrant issues, the archives document the evolution of San Francisco from various perspectives. Residents of lower-income neighborhoods were displaced, and many districts leveled, during urban renewal projects in the 1950s and 1960s, while a 1973-75 recession caused further damages. The resulting plight set the stage for journalism driven by demand for hyper-local coverage of LGBT and feminist rights, gentrification, and third-world issues.

“In the mid-’70s there was consciousness around neighborhoods as social centers and places where community organizing was happening,” Elliott said. “People are facing eviction, they’re protesting, there are these vigils happening, and people talking about gaining rights for long-term things. We’re still working with the legacy of some of the housing decisions [San Francisco] made around that time due to the activism,” she added, citing the Tenderloin Times’ advocacy for SROs in the face of hotel development west of Union Square.

The New Fillmore — established in 1986 as the city became inflicted with crack and AIDS epidemics, just as Reaganism swept in — was at the heart of socioeconomic changes that transformed parts of San Francisco from what felt like a blue-collar town to an increasingly white-collar city. Approximately 30 blocks in the Fillmore and Western Addition were leveled and left vacant until the ’80s, and the monthly paper played an important role in chronicling the return of businesses to the once thriving neighborhood.

“We ended up with the worst of both worlds in the Fillmore,” said Thomas Reynolds, who took over publishing the New Fillmore in 2006. Redevelopment efforts initially provoked no organized public protest, he said, but later “generated a lot of activism. The New Fillmore managed to capture a lot of the change that was coming to the neighborhood, and a lot of the flavor and history of the neighborhood that was being lost.” The paper encouraged civic engagement through a regular architecture column that featured local homes and helped owners register their historic buildings.

Several papers served neighborhoods with large refugee and immigrant populations, many of whom didn’t speak or read English. The Tenderloin Times promoted social services and encouraged activism through coverage of Southeast Asian and local politics, while publishing simultaneously in English, Lao, Cambodian, and Vietnamese over its two-decade run. Others chronicled changes in demographics, including an influx of Chinese residents into Visitation Valley and a population shift in the Mission from predominately Chicano to more Central Americans.

The Noe Valley Voice also took an international turn when escaped Irish prisoner Liam Carl toured the U.S. to expose harsh conditions in British jails. Carl entered the country illegally and was housed in a Noe Valley home in the fall of 1980, telling the Voice, “If [prisoners] thought that perhaps there was a chance that they could be heard through less drastic measures … and maybe bring about some change without so many people having to die, perhaps I can save lives.”

While the newspapers often differed in their coverage, each featured complementary stories chronicling the 1989 Loma Prieta earthquake. Common features included how to check for damage, profiles on restaurants that fed the neighborhood or, as one Noe Valley Voice headline described the experience of meeting neighbors during a power outage: “We Could See the Stars.” Ahead of the 25th anniversary in October, Found SF has examples of quake coverage online.

“It makes me think that the city is comprised of all these little villages and it’s a little hard to say San Francisco has one direction, one value system,” Elliott said. “The papers show the wide variety of people who live in the city … but it’s all very much at a very personal level. They know each other. They’re telling stories about each other.”

For more information on the neighborhood newspaper archiving project, or to volunteer, visit foundsf.org.