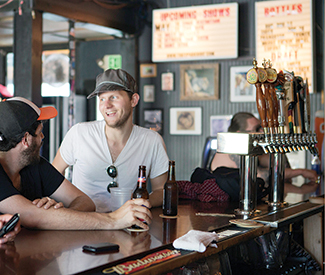 For years it was home to Indie Mart, the DIY, rock-n-roll, block party Kelly Malone and Co. used to throw. Scores of local artist and designers would set up booths along Wisconsin Street, selling all the strange and beautiful things they created, while grimy-looking bands played ear-splitting music inside.

The parade of manic pixie dream girls was unnerving. They had no real place in society and only belonged as unblemished ideals in my mind. Some would float into town for the weekend and set up shop, only to disappear as soon as Indie Mart shut down. Others would flit from booth to booth, trying on each other’s wares and complimenting each other’s outfits. All of them pretty much sold the exact same shit, not that it mattered to me, they were all so lovely to look at and really only brought things to sell to each other anyway.

Thee Parkside is way more than just for day-long block parties full of whimsically dressed Amelies though. It’s a semi-legendary dive bar famed for it’s out-of-the-way location and its kick-ass live shows. Any night of the week you can see a variety of punk, metal, or country bands playing their hearts out on that tiny stage in that perfectly dingy barroom.

It’s also known for an awesome kitchen that manages to turn well-executed dishes like bahn mi and Cuban sandwiches into perfect bar food. If you haven’t been before, the Original Famous Twang Sundays are a great introduction to Thee Parkside life. Where else in The City can you hear country and bluegrass at an all-ages venue with a back patio for free? I think that’s what Sundays were invented for.

Despite these great things that happen at Thee Parkside, it’s still all those Indie Mart afternoons that most poignantly stick out in my mind. Maybe that’s just because, for many San Francisco’s doers and makers, Indie Mart was a place where we found a community of like-minded bad-asses. Dozens of people who were tinkering with wonderful things all throughout the Bay Area suddenly had a place to coalesce, sharing and selling what they made.

Sculptors, screen printers, and jewelry designers, set up shop next to each other while vintage clothes were hawked down the way and carpenters displayed their crafts. People who may never have encountered each other otherwise, were now meeting and forging relationships that would lead to marriages, babies, collaborations, and successful businesses. A diaspora of creative people now had a base and a community and a way to show the world what they were up to. It was honestly and truly, with all earnestness, magical. And Thee Parkside allowed that to happen.

Like all great scenes, Indie Mart came and left just like a goddamn fireball. One day it jumped from being a small thing in Kelly Malone’s backyard to a block party at Thee Parkside. It burned hot and heavy for a few years, and then suddenly it was done. But what it left in its wake was a slew of creators who now had the confidence and contacts to make a business out of what was previously just a hobby. And of course Thee Parkside is still around too.

Every time I pass by, I think, maybe I should get some people together and throw one more big block party for old times sake. And then I say nah, and stop in for a Cuban sandwich and a cheap drink instead.