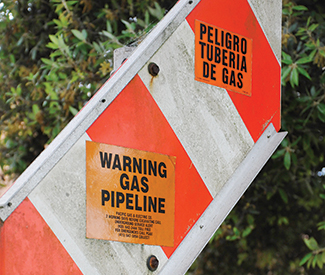 When Herb Felsenfeld and his wife, Gail Newman, look out the window of the Bernal Heights home they’ve lived in for more than 30 years, they see a vacant hilly lot grown in with tall grass, stretching up in the direction of nearby Bernal Heights Park.

The surrounding area has become quite popular. Earlier this year, real estate firm Redfin crowned Bernal Heights the nation’s No. 1 “hottest neighborhood,” its desirability ranked using “a combination of big-data analysis and real-life human experience,” according to the company blog.

There are plans to build two new single-family homes on the slope directly above them, causing a bit of a neighborhood stir. But one detail about this particular site — perched high atop Folsom Street on the eastern slope of Bernal Hill — has neighbors on edge.

Below the surface, extending up a 35 percent grade, is a natural gas pipeline owned and operated by Pacific Gas and Electric Co.

Property records designate it as Line 109, and it traverses the Bernal Heights neighborhood from farther south, running up Folsom Street. Two orange-and-white striped markers stake out its trajectory uphill, with an orange sticker on the back proclaiming, “Warning: Gas Pipeline.”

It’s serviced the area for at least 30 years, perhaps much longer, qualifying it as an aging piece of infrastructure. Felsenfeld, Newman, and neighbor Deborah Gerson say they’re worried that performing excavation on the slope for a road and new home foundations poses a safety threat.

Newman said she was especially perplexed by the San Francisco Planning Department’s issuance of a waiver of an environmental impact review, which is routine for a project of this size, citing no unusual circumstances. “I’m like, wait a minute,” she said. “There’s a pipeline here.”

One would think that any sort of risk would be eliminated by routine safety protocols. But it gets complicated when one considers that PG&E is under federal indictment for criminal negligence for its alleged failure to keep up with pipeline maintenance, due in part to sloppy recordkeeping. There may indeed be little risk involved with the new construction at this site — but then again, the neighbors’ concerns raise questions about whether adequate measures are in place to guarantee safety in this and other situations.

The criminal charges facing PG&E that were filed March 31 stem from an investigation launched in the wake of a fatal 2010 explosion in San Bruno caused by a pipeline rupture, which killed eight people and destroyed an entire neighborhood. The utility is fighting the charges in court and has reportedly invested $2.7 billion in shareholder dollars toward safety improvements since.

But according to the results of a regulatory audit on PG&E’s assessment of its own pipeline records that was undertaken to set things straight after the tragic explosion, crucial pipeline information is still missing or flawed, as the San Francisco Chronicle recently reported.

“Given the San Bruno disaster and the recent media revelations about PG&E’s pipes, we are wondering what information you have gathered on this subject,” Felsenfeld wrote in a letter to one of the housing developers, Fabien Lannoye. “Where exactly is Pipeline No. 109? How deeply is No. 109 buried? What is Pipeline No. 109 composed of? How big in diameter is Pipeline 109? How/with what are the pipe seams welded?”

He sent the same set of questions to PG&E. So far, Felsenfeld hasn’t received any answers. PG&E has also been stonewalling the developer’s information requests.

Lannoye, who is building one of the two new houses, described the project as a two-story, single-family home where he hopes to live with his wife and two children. He said he understands the neighbors’ concerns about safety, but also believes they are organizing in an effort to prevent him from moving forward.

When it comes to his communications with the utility company, however, Lannoye is a bit more baffled. “It’s kind of a little bizarre that we’re not getting clear information,” he said. “I’ve contacted like 15 different people from PG&E, and every time, they send me to someone else. Either they don’t want to give me the information, or they don’t know what it is.”

PG&E did not respond to the Bay Guardian‘s request for comment.

In general, the only parties who seem to be directly involved when there is construction near natural gas pipelines are the utility company and the project developer. An association called the Common Ground Alliance maintains the 811 phone line — a service known as Call Before You Dig — to ensure the location of underground lines are marked prior to any excavation.

When the Guardian phoned San Francisco’s Department of Public Works to ask if the agency has a pipeline risk assessment procedure in place when new construction is planned, we were told that such a thing might fall under the scope of the Department of Building Inspection.

But in a voicemail, DBI spokesperson Bill Strawn responded that such a thing might be up to the Department of Public Works, adding, “There’s no restriction about somebody building a project or a house somewhere in the vicinity of a natural gas pipeline.”

All of which means it falls to PG&E to ensure that high-pressure underground lines are safe, with no chance of rupture when new foundations are being installed close by. But PG&E doesn’t always know what it’s got. According to charges in the federal indictment, the utility created a GIS database in the late 1990s based on pipeline survey sheets that contained erroneous or incomplete information. PG&E then relied on that database to make integrity management decisions.

The indictment noted that prior to the San Bruno disaster, PG&E had been intentionally elevating pressure levels on Line 132, the one that ruptured, as well as Line 109, to maintain peak pressure levels in accordance with federal regulations. But experts have noted that this spiking practice could erode the integrity of a line if there are vulnerable welds.

“Our plan,” Lannoye explained, “is not to dig where the gas line is.” Line 109 would run beneath a sidewalk, he added.

Marilyn Waterman, another neighbor, outlined the situation in an email to University of California Berkeley professor Robert Bea, a nationally renowned civil engineer. She asked Bea if concern is warranted.

“Given the background you provided in your email, yes — you should be concerned,” he responded. It’s an old line, Bea pointed out, in an area with highly variable topography, with no available records detailing its operation and maintenance.

“This list is identical to the list of concerns that summarized causation of the San Bruno Line 132 gas pipeline disaster,” Bea wrote. “The fundamental ‘challenge’ associated with your concern is tied to the word ‘safe.'”