Home Thick as blood: Sibling duo Broods are the next kiwis on the...
WriterLaura B. Childs
SectionNoise 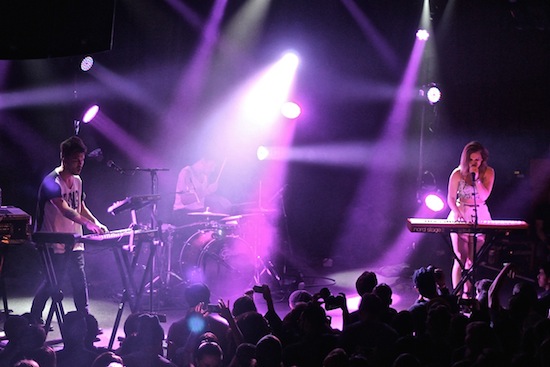 “Kiwis tend to hold back and be too humble. They don’t want to be over-confident, but I think people are starting to realize that a little bit of confidence can go quite well,” says Caleb Nott, the elder brother of the sibling sensation from New Zealand known as Broods. He sits comfortably next to his sister, Georgia, in the back of The Independent, several hours before their show.

The brother-sister electro-pop duo didn’t get that confidence until the release of their first single, “Bridges,” on SoundCloud, created waves on the world wide interwebs last October. “Bridges” became a hit in the blogosphere and in this hemisphere alike, earning over 200,000 streams in a week.

“It all happened at once,” says 19-year-old Georgia. The singer has an innocent face, giving her the appearance of a much younger teenager. “We went from nobody really knowing us to people on the other side of the world wanting to meet us.”

Later that night, the band starts the night off with “Never Gonna Change,” a deep-synth track with correspondingly morose lyrics. “You’re pushing down on my shoulders, and emptying my lungs,” sings Georgia, lyrics reminiscent of a certain internationally-acclaimed Kiwi. Georgia moves slowly around the stage while Caleb creates layered synths and hypnotic beats. The two remain relatively reserved both on stage and in private. Georgia’s voice is sweet and breathy to the likes of Imogen Heap and Romy Madley Croft of The XX. Caleb brings more energy during the upbeat tracks, bouncing up and down behind his keyboard while Georgia skips around stage in a printed corset crop top and white billowy shorts.

Georgia, a self-proclaimed depressing music lover (“I love sad songs,”) falls deeply into “Taking You There,” a personal favorite and one of the strongest songs from the self-titled EP. Caleb gently strums an acoustic guitar and offers deep vocals to accompany his sisters’ silvery, dream-like hums. The audience moves to the soft beat and sings along. Most of the audience knows the words to every song on Broods’ EP, which the siblings admit to still be adjusting to.

“Seeing people wearing our T-shirts in the crowd,” says Caleb before the show. “That’s so weird and crazy, you’ve got my face on your T-shirt.”

Since October, Broods — the name obviously referring to the band members’ blood relation but also the melancholic nature of their songs — has played two US tours, spent a brief stint touring with Haim, and is scheduled as the opening act for Ellie Goulding’s Australia/New Zealand tour this summer.

“Over the last couple of years, people have started to look over to Auckland and to New Zealand as a whole for new music.” Caleb explains. From LadyHawke, to The Naked and Famous, Lorde and now Broods, the New Zealand music scene is a treasure trove of indie talent. Caleb says the music scene remains relatively tight-knit where everyone supports each other in their own music genre but doesn’t reach out beyond, reminiscent to a private high-school. “It’s pretty cliquey, because it’s very small.”

“This one’s for Lorde,” says Georgia in between songs. She dives into the gentle lullaby “Sleep Baby Sleep.” The mesmerizing beat and soft vocals is characteristic of Lorde’s debut album.

The band is clearly following in her footsteps, from the grassroots release of the Broods EP, to the dark coming-of-age tones, to the producer who discovered them. Joel Little found Caleb and Georgia while a judge for a music competition in 2011 but the band wasn’t formed until early 2013 in Auckland. After producing Lorde’s Grammy Award-winning debut album, Joel Little began work on “Bridges.”

Broods closes the show with its first single, “Bridges,” a moody track about broken relationships. Georgia starts out with muted piano chords and an ethereal voice that builds into Caleb’s rich synth soundscape. Georgia’s voice is exceptionally developed for her age. She plays a soft version of a song from their upcoming album. She’s most comfortable behind the piano, her instrument of choice. “And I’m trying hard to make you love me, but I don’t wanna try too hard,” she sings moodily about falling in love with the perfect man.

Broods has played in San Francisco twice now but has yet to play a show in New Zealand. The siblings will head home next week to work on their debut album with Joel Little. Then, they will play their first proper show in their hometown of Nelson with their 17-year-old sister, who is set to open with her folk band. Clearly, talent runs in the family.