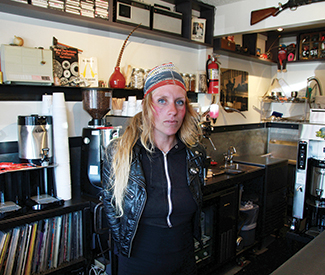 Inscribed on the window at the Yosemite Avenue location of Trouble Coffee & Coconut Club is the phrase: “Serving guts and honor.”

Proprietor Giulietta Carrelli, who opened the Bayview location on April Fools Day of 2013, six years to the day after opening the first Trouble Coffee location on Judah Street in the Outer Sunset, said she started it “to build a community.”

It’s not a café where patrons sit silently on laptops. Nor should one post Instagram photos of the signature cinnamon toast (which costs $3.50, by the way, despite being credited with touching off the $4 toast madness as a signifier of gentrification, something antithetical to what Trouble stands for).

No, Trouble is “a community built via word of mouth instead of technology,” explained Carrelli, a petite blonde whose skin is covered in tattoos, including freckles splashed across her cheekbones. “I knew I was going to build a place that was just face-to-face conversation, as an art form.”

The coffee shop was created with the help of friends and Carrelli explained that she built Trouble “because I couldn’t hold a job.” And for good reason: For years, she’d experienced schizophrenic breakdowns that made it impossible to work steadily. Over time, she’s developed coping mechanisms to get through the worst: Swimming in the ocean. Eating coconuts. Structure.

“Trouble is a survival tool,” both for her and her customers, Carrelli explained. “Everyone needs a place that they trust.” She’s known for her mantra, build your own damn house. What’s it mean? “Your house is your psyche,” she says. “Your house is your truth.”

Carrelli and her coffee shop were recently featured on This American Life, converting her into a celebrity. At first, she says she felt odd having the whole world know about her struggle with mental illness. But one day, she received something in the mail that changed all of that. It was a postcard sent by a schizophrenic, covered in feathers and flowers. On the back was the message: “I’ve lit myself on fire three times. After hearing your story, I don’t think I’ll do it again.”