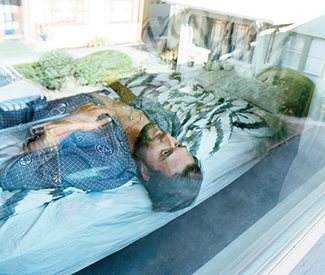 LEFT OF THE DIAL As rock ‘n’ roll narratives go, it’s a rather familiar one: Singer and bandleader who has achieved moderate success with one full-band sound announces that he’s been repressing his true musical instincts for far too long, decides to go solo, and puts out an album that’s a sonic 180 from what fans are used to. History tells us that this is either the moment when stars are born (Michael Jackson, Lou Reed), or the moment when everyone goes, “Oh, maybe the other band members are responsible for way more of the stuff I like than I previously realized?” (Hall, without Oates).

Birds & Batteries frontman Mike Sempert doesn’t seem overly concerned about this fork in the road. For one, when the singer-songwriter began teasing new songs out into the world last month in anticipation of releasing his first solo effort, Mid Dream (out May 6 on Blue Velvet), it became clear that longtime fans of his old band — a San Francisco staple of the last five years that blended Sempert’s husky vocals and Americana influences with an indie electro-pop danceability (aka plenty of synth) — weren’t going to be upset. Far from it: While the album is a clear departure from the heady, airy detachment of Birds & Batteries’ oeuvre, the element that brought those songs down to earth — the understated soulfulness of Sempert’s vocals and songwriting — has emerged in full force on Mid Dream.

A richly introspective album written and recorded in the months before Sempert left the Bay Area for LA last year (to be with his now-wife — SF music scene doomsdayers, calm down), Mid Dream is equal parts wistfulness and hope, uncertainty and a surprised sort of satisfaction about growing up; in other words, it sounds exactly like those rare, heightened moments when you can actually feel one chapter of your life coming to an end and another beginning. Stripped bare of synthesizers and most other electronic elements and loaded up on melody, wall-of-feeling choruses, and ocean imagery, the album also serves as a kind of coming-out party for Sempert’s love of ’70s folk-rockers like Tom Petty, Harry Nilsson, and Randy Newman. Sempert will play these songs for the first time on home turf at the Rickshaw Stop May 14.

“I always had two personalities that I was exploring with Birds & Batteries. Initially it was this merging of the folk-Americana-singer-songwriter thing with the synthy art-pop stuff,” says Sempert. “But I’d gotten to a point where I wanted to zero in more on a sound, and instead of taking my singer-songwriter stuff and trying to adapt it, I just started putting those songs to the side…so I’ve had this stack of songs I wanted to try developing for a while.”

After a few years in a row of hustling full-time in B&B, the timing felt right last year to take a breather and consider the pile, he says. “That’s a hard-working band, and we had a lot of good times and successes, but frankly I got pretty burned out…especially with the kind of ‘take over the world’ thing we were trying to do. I got married, I moved to LA; it just felt like time to focus on making music for the right reasons and from the heart, without a big agenda.”

To be clear, that shouldn’t be read as a dig at his old bandmates — two of whom, drummer Colin Fahrner and bassist Jill Heinke, he invited to make up his current rhythm section. Sempert emphasizes that the entire record is a family affair of sorts, with regulars from the Bay Area folk scene and many an Oakland friend-band — including Sonya Cotton, Kacey Johansing, Emily Ritz, Andrew Maguire, Anton and Lewis Patzner, and more — adding backup vocals, strings, percussion; the list goes on. Sempert gives an extra-special nod to TaughtMe songwriter-engineer Blake Henderson, who helped him shape his vision for the record.

“I had so much help, so many supportive people around me in the songwriter community in the Bay Area,” he says. “Honestly, at the beginning of deciding to make [the album], I was just thinking ‘I bet my friends will like this.’ And for this one, the idea of just getting to share it with them — that was enough.”

What kind of person looks at a massively expensive three-day music festival whose inaugural year was widely considered an organizational failure and public relations nightmare, not to mention one that cost the city in which it took place thousands of dollars, and says “Hey — I want to be in charge of that next year”?

Dave Graham, it turns out. As the CEO of the brand-new BottleRock Napa Valley — a festival now in its second year, spanning May 30 to June 1, with headliners OutKast and The Cure, but, as Graham emphasizes, one owned and run by entirely different people than those responsible for last summer’s debacle — Graham has gotten used to answering the question: Why the hell would you want to take this on?

“For one, I had an amazing time last year,” says Graham, a Napa native and entrepreneur. “I was born and raised here, this was just the coolest thing that I’d ever experienced, and I couldn’t believe it was going on in my own backyard.” He noted what mistakes had been made, he said, and when the chance arose to invest in a partnership for 2014, he saw an opportunity to make something great. The only problem(s)? A boatload of debt, and the task of trying to find investors for this year’s festival in a community of merchants still stinging from 2013. Then there was the fact that, at the time of signing on in January, Graham and his partners had less than three months to book a lineup.

“It’s been challenging, to say the least,” says Graham. “Once we bought the rights to the name BottleRock, it was difficult, and understandably so, for people in the music industry, creditors, and just the general population to understand that we had zero to do with the mess that was created last year, and that we had no obligation to make a bad situation better…but we’re committed to doing just that. The main thing was, we just wanted to keep it local.”

Time will tell whether or not Graham and his team succeed in winning back the hearts of Napa residents and business owners. Given the time period they had for booking, the lineup they pulled off is pretty impressive on its own — if a little ’90s-tastic, stacked with alt-rock staples like Cracker, Weezer, Third Eye Blind, and Blues Traveler. But hey, if your idea of a good festival is getting super nostalgic with a slightly older set over a nice glass or two of pinot noir (note: nothin’ wrong with that) and you have the dough to spare (single day: $149), it’d probably be worth your while to see what else the new guys can pull off.

Two other shows you should probably go to this week: San Francisco’s Cool Ghouls, who make some of most unpretentiously happy, jangly, beach-brat garage pop you’ve ever heard, are headlining The Chapel Thursday/15. And A Minor Forest, SF math rock veterans who made lots of people very happy when they got back together last year, will be there Saturday/17.

In case you hadn’t noticed, The Chapel’s bookers are killing it lately. And despite lots of angry internet buzz about noise complaints from The Chapel’s neighbors — let’s be real, our reaction over here was something like “If you rent an apartment next to a music venue on Valencia and then complain that there’s music coming out of it, you are everything that is wrong with everything, please leave,” — a representative from the venue says there’s really no news, nothing to get up in arms about.

“The Chapel had the normal, required Planning Commission ‘look back’ hearing [May 8] where they make sure the business is in compliance with Planning conditions,” Patricia Dedekian, a manager at The Chapel, told us. “There was only one neighbor who has done 99 percent of the complaining and he appeared at the hearing. We passed the hearing with flying colors, with unanimous support from the Planning Commissioners.” Still, you know. Support your local venues. It’s not hard to do when they’re putting on several rad shows a week.