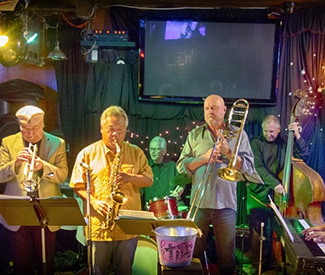 Sunday evening is bringing a nearly imperceptible chill to the warm air off the bay, flowing through the open doors at the 7 Mile House on Bayshore Boulevard. Dennis Cummings, the roadhouse’s attentive food and entertainment manager, has just taken a dinner order from a quartet of jazz players, who are bringing their first set to a close with a Brazilian bossa, “Chega de Saudade,” translated in our language as “No More Blues,” and neatly matching both the benign springtime climate and the sentiment of the smiling, seated fans, some of whom are already munching through their plates of lumpia, quesadillas, or salpicao steak.

While visionary bebop alto saxophonist Andrew Speight, bassist Michael Zisman, and keyboardist Ben Stolorow repair to the rear of the establishment to consume a complimentary meal during their break, drummer and session leader Vince Lateano walks the floor with a small tip bucket. “I always preface my solicitation with, ‘Are you enjoying the music?’,” Lateano reveals. “And I’d say, 80 percent of the time, even people who aren’t there for the music will want to put something in.”

That includes the venue’s many sports fans, who’ve been eyeing the bank of large-screen TVs behind the bar, where the San Francisco Giants have tied the Atlanta Braves in extra innings. There’s always been lots to do at the 7 Mile. Travelers have been dropping in ever since the property was developed as a stagecoach stop a century and a half ago, seven miles south of San Francisco’s Union Depot and Ferry House. By the latter part of the 20th century, it had become something of a trucker and biker bar.

More recently, trumpeter Al Molina came in en route to his home and studio in nearby Brisbane and convinced current co-owner Vanessa Garcia to let him establish the venue’s first successful jazz night, on Tuesdays. When fellow horn man Dave Bendigkeit began sitting in on those sessions, he had a sense of the place’s historical diversity.

“I saw, there are people here just for the jazz,” Bendigkeit recalls. “But there are people here just for the food, people that had no idea there was music until they walked in the door, and people here for the sports. I’ve been brought up to read the audience and try to make ’em happy. But how you gonna read this room?” A couple of weeks after starting his own weekly Monday gig with his Keepers of the Flame band earlier this year, Bendigkeit realized, “We should just do what we want, and everybody’s happy.”

What’s making jazz fans happy at the 7 Mile is also the continuation of a high standard of jazz in an accessible and supportive setting — something that’s become harder to find in the Bay Area over the course of the past decade. The Sunday sessions are dubbed The Doghouse Jazz Jam, in recognition of their origin at the erstwhile Dogpatch Saloon on San Francisco’s Third Street. Speight, Zisman, Lateano, and others had been jamming there since escalating rents closed down Jazz at Pearl’s in North Beach in 2003 (where Lateano had served as de facto music director) due to escalating rents. The Dogpatch attracted a dependable crowd of mostly middle-aged jazz fans, who were dismayed last year when owner Mike Apicelli, himself a devoted jazz buff (he rang a ship’s bell behind the bar for every good solo), decided to retire and sell to new, younger entrepreneurs. Thus, Sundays were transplanted to the 7 Mile, where frequent Dogpatch visitor Molina was already hosting “Jazz On the Mile: The Horace Silver Project,” every Tuesday.

“At Dogpatch, Apicelli and Bob and Jim [bartender Brown and doorman Yarbrough, respectively] were family, and it’s like that at 7 Mile, with Dennis and Vanessa,” testifies Lateano. “And they’ve totally warmed up to having jazz music. When I first started playing there, [Dennis] just appreciated the musicianship, and the more he heard, the more he started to understand it, especially the Horace Silver stuff, because I think of all the jazz, Horace is closest to R&B.”

“When I try to do too much rock, attendance is down,” notes Cummings, who plays electric bass. “But when I go with jazz, R&B, and blues, attendance is up.” He’s expanded the 7 Mile into seven-days-a-week music bookings in a variety of genres, including karaoke, blues, R&B, and some rock. “But I figured out that my favorite night to work was Tuesday, because they’re into the music, they’re older folk who come for the music and respect the musicians, buy entrees and wine, and tip well.”

Younger folk, including families with kids, find themselves grooving to the spirit of the music — even if the kids are multitasking with the crayons provided by waitstaff and their parents are keeping watch on the home teams, whose touchdowns and home runs sometimes coincide with a pyrotechnic drum solo. In the tradition of jazz, younger players are also invited to stand alongside the veterans during the second set, and to converse with them during breaks. It’s the sort of learning experience which reminds Lateano of his own youth in Sacramento: “There are older guys, and you get up there, and you’re scared to death. But nothing ventured, nothing gained.”

On Mondays, singers are welcomed and ably supported by the Keepers of the Flame. “Usually, I’ll sing a song myself, it breaks up the total instrumental thing,” says bandleader Bendigkeit. “I’ll try singing one or two funny songs like ‘I’m Hip’ or ‘Cloudburst,’ and then I’ll say, ‘Now here’s a real singer.’ I think it creates a bridge for folks who might want to join us.”

Tuesdays, in addition to serving as a showcase of joyful Latin-tinged jazz composer Horace Silver, are a vital opportunity for bandleader Molina “to stretch myself,” to read through his carefully prepared and rehearsed transcriptions, and to keep company with his peers. “All these musicians grew up during that period of the ’50s and ’60s, when jazz was king,” says Molina. “We create the same kind of environment that was going on in those times.”

Cummings notes that there’s considerable cross-pollination over 7 Miles’s jazz program. Molina guests at Sunday jams (as he did at the Dogpatch) and on Mondays, and Lateano serves both as leader on Sunday and drummer on Tuesday, and will be subbing for the formidable Akira Tana next Monday. He hopes there’ll even be hopping from jazz to R&B, and in the opposite direction. It seems like the right place for that sort of thing to happen.

“That’s the thing about Vanessa and Dennis, they understand the importance of longevity,” says Bendigkeit. “And I have no instructions of ‘you gotta play this way’ from either of them. I can’t say it enough times: these people actually get it.”