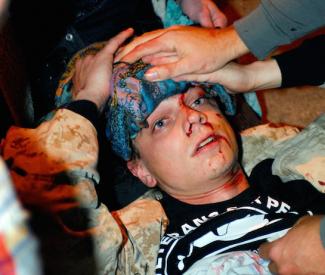 Injured veteran Scott Olsen is calling on Mayor Jean Quan to ban the Oakland Police Department from using less-than-lethal weapons during protests and other crowd events.

The announcement came through his attorneys at the National Lawyers Guild Tuesday night, on the heels of Oakland City Council’s vote to approve a $4.5 million payout to Olsen for brain injuries he sustained at the hands of the OPD at an Occupy Oakland protest in 2011.

An OPD officer shot a beanbag into the crowd, striking Olsen in the head. His skull was shattered and part of his brain was destroyed. Olsen had to learn how to talk all over again. The beanbag may have been “less lethal,” he contends, but the injury cost him dearly.

“Other major Bay Area cities don’t use SIM [Specialty Impact Munitions], chemical agents, or explosives on crowds, and we don’t need them in Oakland,” Olsen said, in a press statement. “OPD can’t be trusted to abide by its policies. These dangerous weapons must be completely banned at demonstrations and other crowd events. “

The “beanbag” that struck Olsen is more accurately described as a flexible baton round, a press release from the Oakland City Attorney’s office wrote. A flexible baton is a cloth-enclosed, lead-filled round known an SIM that is fired from a shotgun.

Olsen and his attorneys, the National Lawyers Guild, launched a petition calling for OPD to cease use of less lethal weapons on crowds, which had 45 supporters as of press time.

So-called less lethal weapons like tear gas canisters, rubber bullets, and flexible baton rounds have injured over a dozen Oakland protesters, costing the city over $6.5 million in legal fees, according to the NLG.

As we’ve previously reported, OPD is currently under federal oversight over its mishandling of the Occupy protests and questionable actions in the infamous Riders case. OPD’s own Incident Statistics document the extensive use of force the night Scott Olsen was injured.

Ultimately, Oakland will pay only $1.5 million of the $4.5 million settlement, city spokesperson Alex Katz wrote in a press release. The city’s insurance will pay the rest.

But the danger is far greater than fiscal.

Jim Chanin, one of Olsen‘s attorneys, noted that people have been inadvertently killed by less lethal weapons before, including a bystander in a 2003 incident in Boston.

“If OPD is allowed to continue to shoot SIM and toss explosives into crowds,” Chanin said, “it is only a matter of time before someone is killed.”