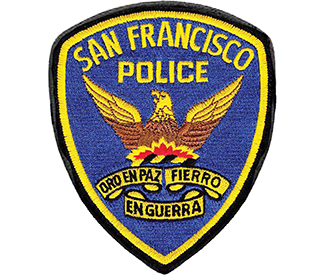 Following the incident, police said Pralourng was mentally ill and had lunged at Godfrey with a box cutter, prompting her to fire in defense of her own life. Just before it happened, Pralourng had slashed his coworker at Tcho chocolate factory and fled.

Last September, the San Francisco Police Department honored Godfrey with a silver medal of valor for her conduct in that incident. The second-highest possible honor, silver medals are awarded in cases where an officer exhibits “outstanding bravery in the performance of duty,” according to a definition on the SFPD website, and “risks his or her life with full and unquestionable knowledge of the danger involved.”

However, an internal affairs investigation into the officer-involved shooting remained open at the time that the medal was awarded. In fact, in a May 5 voicemail, police spokesperson Albie Esparza confirmed to the Bay Guardian: “That case is still open, so there is no more information that we are going to release at this time.”

More than eight months have passed since Godfrey was honored — and yet the shooting is still under investigation.

The San Francisco Police Commission voted to approve Godfrey’s silver medal, along with a list of other medal of valor recipients, at its June 26, 2013 meeting. But it was Commissioner Angela Chan, who was recently denied reappointment to her post in a 7-4 vote by the Board of Supervisors, who cast the lone dissenting vote (See “SFBG Wrap” in this issue).

Chan was later quoted in press reports as saying she believed that awarding Godfrey with a medal of valor before the formal investigative process had concluded seemed to undermine that process. Internal affairs investigations are part of the city’s formal process to ensure police accountability. San Francisco also has an independent city department, the Office of Citizen Complaints, which provides civilian oversight by making determinations about citizen complaints alleging officer misconduct.

“Officer Godfrey was extremely upset when I met with her and immediately voiced her regret at having to take the life of another human being,” Halloran wrote. “It is every officer’s worst nightmare. The emotional and psychological trauma following an officer involved shooting can be severe, and it is absolutely essential that officers involved in these types of incidents receive positive reinforcement, as well as counseling, to reassure them that they did nothing wrong.”

Counseling seems appropriate, but Halloran’s blanket statement that officers involved in deadly use of force incidents should be reassured that “they did nothing wrong” seems to discount the city’s process for determining whether or not an officer’s action was justified.

The SFPOA president went on to note that his organization has long complained that “officers are left hanging for months, and in some cases years, before being recognized for their heroic acts, sometimes making them feel more insecure and raising more self-doubts about their actions.”

The SFPOA’s overt condemnation of Chan for her dissent suggests that the police commissioner faced strong opposition from a politically powerful entity when she came up for reappointment.

More importantly, it suggests that the SFPOA won’t hesitate to exert pressure on police commissioners who question the department’s actions — and raises questions about why top brass would ignore an open investigation that had yet to establish whether Godfrey “did nothing wrong.”

Internal affairs investigators weren’t the only ones looking into this fatal shooting of Pralourng. The OCC, the civilian police oversight board, was also investigating the incident when Godfrey was honored. Almost two years after the fact, the OCC investigation also remains open.

The OCC’s annual report, released March 12, was slated for presentation at the Police Commission on May 7. The 179-page report shines a light on the allegations filed against police officers, the process by which these complaints are investigated and addressed, and the rate at which complaints are sustained and followed up with disciplinary action.

Being a police officer isn’t easy, and can be very dangerous — even costing officers their lives in extreme circumstances. The OCC report notes that 75 percent of San Francisco police officers did not have any complaints filed against them in 2013. But of the remaining 25 percent, the report noted that 131 officers had been named in two or more complaints, while another 405 officers had each been flagged in a single complaint.

If the OCC determines that a complaint about officer misconduct is valid, then it is counted as “sustained.”

In 2013, according to the report, the OCC received 727 complaints, and closed 722 complaints. Of the 722 that were closed, 43 — or about 6 percent — were sustained. Of those sustained cases, 91 percent resulted in corrective or disciplinary action by the SFPD, the report noted, ranging from a verbal admonishment to a suspension.

Of the 43 cases that were sustained, 56 percent were for “neglect of duty,” the majority of which was issued for failure to collect traffic stop data. That was followed by “unwarranted action” at 24 percent, “conduct reflecting discredit represented” at 10 percent, “unnecessary force” at 7 percent, and “discourtesy” at 3 percent.

A synopsis of the “unnecessary force” findings provides examples, such as an incident in which “a sergeant and officers used unnecessary force when without cause, they entered a residence, grabbed, detained, arrested and removed an occupant from the residence, and took him to the ground.”

But according to the report, “By far the most frequent finding in all allegations was ‘not sustained,'” reflecting the outcome of 61 percent of allegations in OCC complaints.

The determination “not sustained” isn’t the same as finding that an officer acted appropriately, nor does it mean a complainant made false allegations. Instead, the finding is issued when “there is not a preponderance of evidence to prove or disprove,” the allegation, OCC Executive Director Joyce Hicks told us.

Put more simply: An officer responds to a complainant with a contradictory account, and since there isn’t enough evidence to prove otherwise, the case is closed.

At the end of 2013, according to the OCC report, the civilian oversight board “continued to investigate three officer-involved shootings. Two of these shootings resulted in the death of the suspect. In 2013, the OCC closed two 2011 officer involved shooting cases with no sustained findings.”

Hicks noted that she faces budgetary constraints that have prevented her from hiring more investigators, an ongoing problem at the OCC. “We still don’t have the best practices number of cases,” she said, noting that the City Controller had issued a 2007 audit stating that investigators should be handling no more than 16 cases at once, while “my investigators’ caseloads have never fallen below 21.”

Aside from its investigations into citizen complaints, the OCC also makes policy recommendations. Following a number of officer-involved shootings in 2012 involving mentally ill individuals, the OCC issued a set of recommendations on handling responses to individuals experiencing mental crisis — the exact sort of situation that led to Pralourng’s death in 2012.

Samara Marion, an attorney with the OCC, noted that one recommendation pertains to how the Firearm Discharge Review Board, which evaluates whether a shooting was justified, performs its analysis. Rather than merely relying on the internal affairs and homicide reports, Marion said, the OCC recommendation is to “have the training division do an analysis that’s point by point,” so that the determination is made taking into account “all of the decision-making and tactical steps leading up to the officer-involved shooting.”

That work is expected to continue, but as far as the Police Commission is concerned, it will have to go forward without input from Chan, who had planned to take a close look at officer-involved shootings in her next term.

“It was shameful and outrageous what happened, because I was targeted for doing what I believe in,” Chan said later. But she said political pressures has thwarted that goal.

“What happened was not really about me,” she continued. “It was about whether something as important as a civilian police oversight body should be politicized.”