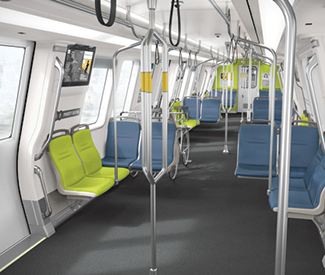 Transit options for wheelchair users and people with disabilities are under threat in the Bay Area, and riders are losing ground on multiple transit fronts.

In late April and early May, hundreds of advocates for those with disabilities took to the streets, protesting BART’s Fleet of the Future, a touring mockup of a new BART trains slated to roll out in 2017.

The trains are a step backward in wheelchair accessibility, among other issues, advocates said.

Just last month, advocates for senior and those with disabilities stormed a San Francisco Municipal Transportation Agency Board of Directors meeting, asking for free Muni for the most economically disadvantaged among them. They were denied based on dollar amounts, while drivers were given an $11 million giveback restoring free Sunday parking meters.

Compounding that decision was the SFMTA’s March adoption of its Transit Effectiveness Project, which the agency billed as expanding service by 12 percent and improving the system’s efficiency, but some advocates for seniors and the disabled noted it removed some bus stops, requiring longer walks by those who have a hard time getting around.

The transit troubles cover most of the transportation options available to San Franciscans with disabilities, and that’s the problem.

“We’re one of the most transit-dependent populations,” Peter Mendoza, a community organizer with the Independent Living Resource Center, told the Guardian. He also uses a wheelchair. “Everything we do in our everyday life, we mostly do with public transportation.”

Their needs are simple: getting groceries, seeing a movie, picking up their kids from school. People with disabilities are now in a multi-pronged fight for their right to everyday mobility, and to do so with dignity.

A walking tour of BART’s Fleet of the Future shows much is new: computer screens with live GPS updates of the train’s location, triple-bike racks, and redesigned seats. BART Vehicle Systems Engineer Brian Bentley proudly showed us the new touch screens in the driver’s cockpit.

For people with disabilities, the Fleet of the Future is a step backward. Their first beef with BART’s new trains is a simple one: there’s a pole in the way of the door.

Hundreds of disability advocates protested BART’s public tour of its newly redesigned trains just last week, with more protests planned for the future. All they want is the damned pole moved.

The handhold in question features a triple-pronged design: what begins as one vertical metal column branches into three partway off the ground.

“Where the pole is now is in the path of travel for the accessible seating area,” Mendoza said. “People holding onto the poles and the power wheelchairs will be in a sense be trying to occupy the same space.”

BART’s Fleet of the Future will arrive in limited numbers in 2015, and fully roll out by 2017, according to the BART website. BART plans to use the new trains for decades. So will BART move the pole to a different location in the car before then?

Trost told us BART did its due diligence by garnering feedback from the BART Disability Task Force. But the DTF, a volunteer body serving like a consistent focus group, informed BART of the pole-problem years ago.

“From day one, they identified the pole as being a problem,” BART Access Coordinator Ike Nnaji told us. Now, he said, “the pole has been moved slightly.”

The triple column handhold has also been raised since the initial outcry. But advocates say the changes still haven’t solved mobility problems. And lack of BART access would be especially poignant, as the trains are now one of the most seamless public transit trips a wheelchair rider can take, advocates told us.

Unlike a Muni or AC Transit bus, no one needs to strap in a wheelchair user on a BART train. After an elevator ride to the train platform (assuming they’re working), they easily roll onto the train: no muss, no fuss.

“On BART, I can be a regular customer,” longtime disability rights activist Corbett O’Toole told the Guardian. “I can ride it with dignity.”

The wheelchair-using community isn’t the only one with BART concerns. Emergency intercoms have long been an issue with the deaf community, O’Toole told us. The BART train’s new video screen would be a natural place to integrate visual emergency communication, she said.

Trost told us BART is trying to balance the needs of many communities, from bicyclists to folks not tall enough to reach the handholds.

“It’s public transit, you try to help everyone,” she said. But people with disabilities are a group with federal law mandating consideration of their access, Mendoza said.

We asked BART if the agency had specific employees (besides the DTF) in charge of ensuring American with Disabilities Act compliance. BART spokesperson Luna Salaver told us the agency doesn’t have an ADA compliance officer, but its engineering staff and consultants are well-versed in ADA compliance issues.

BART’s board may take a direct vote on disability access modifications to the Fleet of the Future at its May 22 meeting, but that may be subject to change.

While the wheelchair accessibility of the Fleet of the Future is hotly contested, the future of rideshare disability access remains a mystery to most.

Worryingly, the newest numbers from the SFMTA paint a portrait of hundreds of stranded wheelchair users. In January 2013, there were 1,379 wheelchair trips via taxi cab, according to numbers provided by the SFMTA, which regulates taxis. This January, that number plummeted to nearly half that.

The drivers just weren’t there. The SFMTA Board of Directors voted in January to offer a $10-per-trip cash incentive for drivers that pick up wheelchair users. But it was like a bandage on a gaping wound: the number of taxis picking up wheelchair users in San Francisco has not yet increased.

And Uber, Lyft, and Sidecar aren’t yet equipped to pick up wheelchair users.

As we’ve previously reported, Lyft, Sidecar, and Uber were recently required to file disability access plans with the California Public Utilities Commission. Some mention researching wheelchair access in the future, but most of the one-page plans tout their apps’ ability to speak to visually impaired users. None promise wheelchair-accessible cars.

The SFMTA is trying to lure taxi drivers back from these Transportation Network Companies through waived permit fees. Deputy Director of Taxi Services Christiane Hayashi said, “the total cost to the public of the TNC phenomenon is over $3 million and counting.”

Despite the stark numbers offered by the SFMTA, the CPUC doesn’t see the situation as a crisis. At a hearing on accessible transit, Marzia Zafar, the director of policy and planning division at the CPUC, told the Guardian there isn’t enough data at this point to say why the disabled community isn’t riding taxis as often as they did before.

“The commission will step in once we have information, verifiable information, that there’s a divide between the disabled and abled communities,” she said. “If there is such discrimination (on part of the TNCs), we will step in and bridge that divide.”

The CPUC could require TNCs to provide access, BART may modify its Fleet of the Future, and the SFMTA can still provide free Muni for seniors and people with disabilities in January.

And in the meanwhile, people with disabilities are waiting for a ride which may or may not ever arrive.