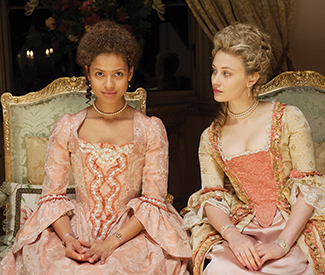 FILM A 1779 painting commissioned by the First Earl of Mansfield (and now owned by the present one) portrays two young women near a lake. One faces us formally, composedly, suggesting the posture held over hours of sitting in the (unknown) artist’s studio; but the other, whose arm she grasps, is tilted forward in motion, wears an exotic feathered turban and plunging neckline, with one hand rakishly cradling a cheek. The contrast is all the more striking because the former lady is white and the latter black, yet the image lacks any typical indicator that their relationship was a master-servant one. Indeed, they give every appearance of simply being friends.

Without that canvas, history might have entirely forgotten Dido Elizabeth Belle, who’d been born 18 years earlier in the West Indies to Sir John Lindsay, an admiral of the British Navy, and Maria Belle — who may have been an African slave captured from the Spanish in Havana. At some early point Dido was deposited in England, to the care of Lindsay’s childless aunt and uncle. Little is known about the decades she spent in their household, during which time her father passed away. But interestingly, the great-uncle she was primarily raised by was also Lord Chief Justice at a time when there was increasing public pressure for the Empire to end its participation in the lucrative global slave trade. He eventually made court decisions that at least began turning the English legal tide against that cruel institution.

His life is much better chronicled than that of illegitimate ward Dido, so in focusing on her experience, the new costume drama Belle is by necessity largely an imaginative fiction. This handsome piece directed by former actress Amma Asante and written by Misan Sagay offers all the conventional satisfactions of Masterpiece Theatre-type cinema, involving as it does well-dressed aristocratic intrigue in fabulous settings. But while Belle is just a thoroughly satisfying rather than truly inspired example of the genre, it benefits from having more on its mind than romance and royalty: Taking place in an almost absurdly rarefied, privileged circumstance, particularly as compared to the institutionalized brutality shown in something like 2013’s 12 Years a Slave, it nonetheless also makes us confront the injustice of rating one class of person beneath another.

Entrusted with all naive good intentions by dashing, kind Lindsay (Matthew Goode) to previously unmet relatives after her mother’s death, young Dido (Lauren Julien-Box) suffers the inevitable culture shock. But she’s not half as shocked as her new minders, who sputter “But … she’s black!” before dad promptly sails off again. Nonetheless, Lord Mansfield (Tom Willkinson), Lady Mansfield (Emily Watson) and live-in spinster sibling Lady Murray (Penelope Wilton) endeavor to raise this child as they would any other — like Elizabeth (Cara Jenkins), another illegitimate family offspring they’ve been stuck with. The two girls become inseparable, and so long as they stay within the enormous estate’s bounds, they are equals.

But once they reach marriageable age, their differently disabled social statuses become hard to ignore. Both are beautiful and well-bred, yes. But quiet, intelligent Dido (Gugu Mbatha-Raw) is heiress to a fortune, one that might tempt suitors even as her skin color makes her very existence a sordid scandal for some. Meanwhile, Elizabeth (Sarah Gadon) is blonde, vivacious, and penniless, which makes her pretty well useless in this milieu where blue blood is prized, yet in reality held less valuable than cash money. Undesirable to their alleged peers, and barred by propriety from marrying “beneath” them, they seemingly cannot marry at all — and what other role is left them in this era, besides the unhappy spinster-housekeeper one Lady Murray endures? Among those dangling possible solutions — albeit sometimes treacherously — are two bachelor sons (James Norton, Harry Potter villain Tom Felton) of the icy Lady Ashford (Miranda Richardson), and a more humbly born legal apprentice (Sam Reid) who hopes to sway Judge Mansfield toward the abolitionist cause.

Belle does indeed sometimes commit the sin of forcing post-Civil Rights morality and other very modern mindsets on characters who would hardly be so advanced in the late 1700s. But that seems forgivable in this context, given that a movie that fully internalized Dido’s perceived racial inferiority would be too bleak to provide any of this one’s Jane Austen-esque pleasures. (Besides, there is some admittedly sketchy evidence that the real Dido was educated and otherwise treated as an equal within her immediate family circle, not to mention unthinkingly obeyed by their servants.)

There’s a fairy-tale appeal to the lovely, deft leads, a familiar satisfying dastardliness to their foes, and of course no end of scene-stealing from the support-cast veterans. Unlike a movie such as 1999’s Mansfield Park or the awful Reese Witherspoon Vanity Fair (2004), the weightier external historical issues aren’t clumsily shoehorned into existing texts. Belle gets to address both fancy-dress love stuff and the grotesque injustice of a “civilized” world built on slavery because, in this stranger-than-fiction instance, the two are more or less evenly relevant. Which makes this a guilt-free teacake of its type, one you can have and eat, too. *