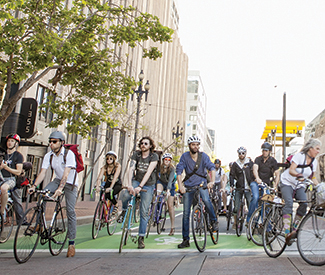 When the first Bike to Work Day was held in San Francisco 20 years ago, cyclists had little support in City Hall. But on May 8, almost every one of the city’s top political leaders will take part in Bike to Work Day, pledging their support to an increasingly popular and important transportation option.

In fact, Bike to Work Day has become such an anticipated event in San Francisco that city officials and cycling advocates in recent years have used it as the deadline to unveil the latest high-profile bike project to demonstrate the city’s commitment to cycling.

This year, it’s the new contraflow bike lanes on lower Polk Street, an important connection from Market Street to City Hall that helps cyclists avoid dangerous, car-centric Van Ness Avenue or Larkin Street — without having to illegally cut up the one-way section of Polk.

When that $2.5 million bike and pedestrian project — with its attractive landscaping, pedestrian bulb-outs, pretty green lanes, and trio of special bike-only signal lights — was officially opened on May 2, bike activists kept circling the new lanes as if they were doing victory laps.

“I cannot think of a better way to kick off Bike Month in the Bay Area and the 20th anniversary of Bike to Work Day, coming up May 8, than to celebrate what I think is the most beautiful, functional, well-designed, and what is probably going to be the best used piece of bike infrastructure in our city,” San Francisco Bicycle Coalition Director Leah Shahum said at the ribbon-cutting ceremony.

She and the others who spoke at the event praised the city officials who moved quickly to complete this project, calling it a testament to the growing political will to make streets safer and more welcoming for cyclists.

“I will be honest, we put a lot of pressure on to get this done by Bike to Work Day,” Shahum said. “We really wanted to make sure you all and the folks throughout this city could, this year, for the first time in San Francisco’s history, make a safe and comfortable and direct link from Market Street…to City Hall.”

Building high-profile, separated cycletracks to the steps of City Hall seems to symbolically mark the arrival of cyclists into the political mainstream.

Twenty years ago, California Bicycle Coalition Director Dave Snyder was the head of SFBC, and he was able to persuade only one member of the Board of Supervisors to participate in that first Bike to Work Day.

“I should give a shout-out to Tom Ammiano because he was the first supervisor to care enough to ride on Bike to Work Day, back when the Board of Supervisors didn’t really care about cycling,” Snyder told us. “These days, it’s not uncommon for supervisors to ride for transportation, but back then none did.”

Shahum remembers it as well, back before the SFBC was one of the city’s largest member-based political advocacy organizations.

“Twenty years ago, Bike to Work Day was a fun but sort of lonely event,” Shahum told us, noting how the number of cyclists on the road has exploded in recent years. “Riding on a regular Thursday during rush hour feels like Bike to Work Day used to feel 20 years ago.”

But both Snyder and Shahum said the universal statements of support for cycling that emanate from City Hall these days are only half the battle.

“It’s a good idea to promote bicycling as a mainstream activity, and we won that battle,” Snyder said. “Now, we have to get them to put their money where their mouth is.”

With cycling projects receiving less than 1 percent of the city’s transportation funding, and city officials so far unwilling to pay for the projects that would allow the city to meet its official goal of 20 percent of all vehicle trips being by bike by the year 2020, Snyder said, “We haven’t accomplished that second goal yet.”

“We hear them all talk about investing money in bike infrastructure,” Shahum told us, “but now the decision makers need to do it.”

A report released in December by the Budget and Legislative Analyst’s Office shows that San Francisco spends less per capita on bike infrastructure, at just over $9 annually, than other bike-friendly US cities such as Portland, Minneapolis, and Seattle. And it found the city would need to spend about $580 million to reach its official goal of 20 percent bike mode-share by 2020.

Even meeting the SFMTA’s more moderate Strategic Plan Scenario — which aims to reach 8-10 percent mode-share by 2018 by creating 12 miles of new bike lanes and upgrading 50 existing miles and 50 intersections — would require $191 million. That’s $142 million more than the SFMTA now has budgeted for the work.

At the May 2 event on Polk Street, city officials used the new project to call on voters to approve a pair of transportation funding measure proposed by Mayor Ed Lee for the November ballot — an increase in the vehicle license fee and a $500 million general obligation bond — which the Board of Supervisors will consider later this month.

“Do you guys like what you see here?” SFMTA Director Ed Reiskin told the crowd, eliciting a rousing response. “Would you like to see more of this kind of work all over San Francisco?”

Then Reiskin connected that goal to the fall ballot measures, the lion’s share of which will go to Muni improvements.

“With the funds we have, there’s only so much of this we can do and we know the need is so great to make biking and walking a safer and more attractive means of getting around the city. If we want to do more of this, we’re going to need more support in November,” Reiskin said.

The city has make significant progress on new bike infrastructure in recent years, after a legal challenge of the city’s Bicycle Plan stalled projects for four years. Ben Jose, a spokesperson for the SFMTA, told us the Polk project is the 52nd of 60 bike improvement projects from the Bike Plan.

“And those that are left are signature projects like this one,” Jose said at the event, referring to high-profile bike lanes along Bayshore and Masonic boulevards, on upper Polk Street, and along Second Street that are among the bike projects now in the pipeline. But the city hasn’t yet devoted the resources to completing the city’s bike network.

“We want to do more projects like this with money from the fall ballot measure,” Rachel Gordon, a spokesperson for the Department of Public Works, told us. “We don’t have enough money in our general fund to do these projects and we hear loud and clear the streets need to be safer for bicyclists and pedestrians.”

The new bikes lanes on Polk are only a few blocks, but it is those kinds of small but critical connections that determine whether cycling in the city is safe or scary.

“I want to know that I can bike safety going north and south on Polk Street, which is why I strongly, strongly support our protected bike lanes on Polk Street, so this is super exciting. As a beginning cyclist, these are the kinds of routes I need to see to get out of my car and onto a bike, so I’m really excited this is the direction our city is moving in,” Sup. Jane Kim said at the event.

Reiskin noted how awkward and unsafe it has been to get from Market Street to City Hall or up Polk Street: “Physically, it’s a pretty small project, but it’s so critically important for those of us who do get around by bike.”

Cyclist Shannon Dodge also spoke at the event, describing her previously awkward commute to work from the Mission District to Russian Hill: “It might look like a tiny stretch of bike lanes to most people, but to me and lots of other people it will make a huge difference. It means we can turn now directly onto Polk Street and we can do it safely.”

She also compared cycling in San Francisco today to the days just before Bike to Work Day began.

“Twenty-one years ago this month, I moved to San Francisco from the East Coast. I came in a van with three friends, so I didn’t bring a lot of possessions. But I did bring my bike and I’ve been biking in San Francisco ever since,” Dodge said.

Back then, in her younger days, she didn’t mind battling for space on the streets of San Francisco.

“When I first moved here, just out of college, safety was not that important to me. I kind of enjoyed the adrenaline rush of being out on a bike in traffic,” she said. “But now I’m a mom. I have a 3-year-old son, and my husband and I bike our son to and from his preschool everyday. And on the weekends we explore the city, which usually means he’s on one of our two bikes. Pretty soon, he’ll be riding his own bike out on San Francisco streets. So safety is incredibly important to me, as it is to all families.”