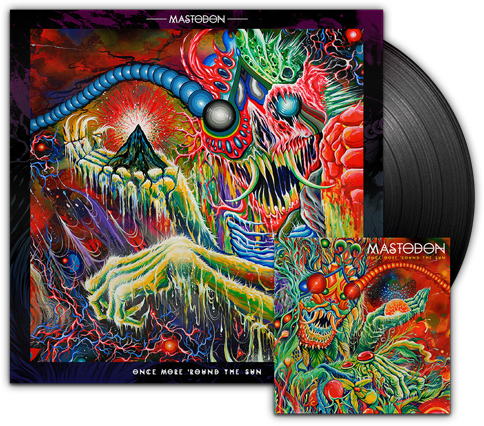 They still exist: big metal bands that go on old-fashioned tours, rather than exclusively playing festivals or headlining package tours (aka shows that start at 4pm and are comprised of two bands you actually want to see and five others the label shoehorns in because that’s the only way they’ll get exposure). Also still in existence: a band that will tour between albums, in fact hitting the road less than two months before a new album drops, and play a set that contains two new songs (to give fans a taste of what’s to come), but is mostly composed of familiar back-catalogue tunes.

Not, however, still around: actual Mastodons.

No worries, dudes — Mastodon the band shows no sign of going anywhere, and based on what drummer Brann Dailor said at the end of last night’s show at Oakland’s Fox Theater, they’ll soon be back in the Bay Area, pumping their sixth studio release, Once More ‘Round the Sun, which arrives in late June. Based on the two new songs heard last night (“Chimes at Midnight” and “High Road;” stream the latter via the band’s Soundcloud page, or check out the “Audio Visualizer” below the jump), your sludgy summer soundtrack awaits.

This between-albums tour was slightly more stripped-down than, say, shows supporting 2009’s Crack the Skye, which boasted a hypnotic visual component built heavily around the album’s astral-projection-meets-Rasputin-themes (in other words, it went well with the funny-smelling smoke that tends to waft around during Mastodon shows). Here, we just got a backdrop of a pair of psychedelic eyes, plus a light show with occasional Laser Floyd flourishes. But Mastodon is not a band that needs bells and whistles to enhance its crushing riffs. Nor does it spend a lot of time chatting up the crowd between songs, though it’s clear this is a band that appreciates its fans, evidenced by the huge array of t-shirt designs and other merch available in the Fox lobby. (Personal favorites: a shirt inspired by the “Come and play with us, Danny!” scene from The Shining, and a pair of gym shorts with “Asstodon” emblazoned on the booty. Perfect attire for the Bay Area’s recent heat wave, no?)

Opening the show for the Atlanta, Ga. foursome were a pair of heavy-hitting European imports: Kvelertak — a personal favorite of the Prince of Norway — and Gojira (“We are Gojira from France!”, as the Bayonne-based band is fond of saying). The latter summed up the feeling of the crowd with its enthusiastic performance, and singer-guitarist Joe Duplantier’s frequent declarations of how fuckin’ stoked he was to be on tour with the mighty Mastodon. Us too, bro. Us too.