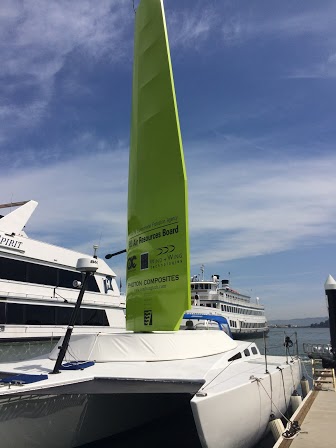 San Francisco, the city with the highest concentration of hybrid cars, may soon be the first city to boast a hybrid ferry as well. Officials today at Pier 1 ½ unveiled a vessel that runs on both wind and engine power, significantly reducing fuel use and air pollution.

The design, called the WingSail, involves a carbon fiber sail that resembles an airplane wing standing up vertically. The sail uses wind to efficiently propel the boat when available, but also works with the engine to keep the vessel moving if gusts die down, much like how a hybrid car switches between fuel and electricity.

“The idea with wind technology is that we could use this every day, with more or less the same propulsion power [as an engine], depending on where you are,” said Damian Breen of the Bay Area Air Quality Management District. “Literally with the flick of a switch, you can go between wind power and fuel power.”

Already existing ferries that are retrofitted to include the WingSail can save up to 40 percent on fuel costs, and ferries that are designed and built with windpower in mind would be even more efficient. Currently, a motorized ferry that travels between San Francisco and Sausalito spends $250 million annually on fuel, according to Jay Gardner, president of Wind+Wing Technologies.

“My vision is to see a bay full of wind-powered ferries,” Gardner said. “I think that could be as iconic as the San Francisco cable cars.”

The trimaran on display today — a smaller scale model of would might eventually be full-sized ferries — just completed three months of test voyages around the Bay Area. Researchers at UC Berkeley will now begin to analyze that data to find the potential improvements in air quality and fuel cost savings. That study will be an important factor in how this technology is implemented in the future, and the results should be published sometime this summer.

The WindSail technology is already being used in racing for both land and water events — most prominently in the America’s Cup sailing championships here on the bay last summer — but this would be the first use of hybrid wind power in a passenger boat. The Wind+Wing Technologies webpage already shows designs for ferries that can hold either 149 or 400 travelers.

All of the builders and officials there today emphasized that the Bay Area is the perfect place to roll out this technology. Not only is it one of the most environmentally conscious regions in the world, but the bay is also windy enough to power the WindSail without relying too heavily on the engine.

One of the attendees asked when you would want to use wind power over fuel, and Breen immediately stepped forward to answer the question.

“Wind is zero emissions,” he said. “Wind is always better.”