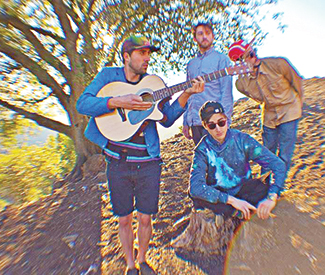 LEFT OF THE DIAL Any musician who’s just released an album will tell you that a little bit of attention is never a bad thing. But a strongly worded cease-and-desist attorney’s letter from the daughter of Aerosmith’s Steven Tyler wasn’t exactly what the dudes in bAd bAd had in mind when they put out their first, self-titled full-length last month. With a shiny new cassette (!) for sale and a release show at Amnesia May 3, members of the lo-fi mariachi-surf-punk band had good reason to be in high spirits. And then, April 22…

“It’s an aggressive letter,” said singer Christian Zamora, one half of a pair of brothers who, in turn, make up half of the four-piece. “Like, a really, really aggressive letter. We’re supposed to cease and desist within 48 hours, and remove all signs of our existence as bAd bAd online, in fliers, everywhere.” Meaning, of course, that the band wouldn’t be able to sell its brand-new pride and joy, bAd bAd’s debut album.

The accusers in question were badbad, an electro-pop duo out of LA that consists of Chelsea Tyler and her fiance, actor Jon Foster. According to a letter from the duo’s attorney, the San Francisco band has been “capitaliz[ing] on the goodwill and reputation” of the other band. The problem, as far as Zamora saw it? Though the duo’s online bio states that they formed in 2011, they played their first-ever show — “a Tommy Hilfiger party…yeah, I know” — in the spring of 2013, the same year they released their first and only song, and, from what Zamora can tell, the same year they actually trademarked the name. Whereas bAd bAd has been at a sort of low-profile hustle since forming in early 2012, playing regular shows at spots like El Rio and Brick and Mortar Music Hall.

“Why do they even care?” said Zamora by phone on April 23, just after word began spreading amongst Bay Area friend-bands thanks to a Facebook post he’d written. “We play modest shows, and I think we’re good, but it’s nowhere near their scene.” The two bands wouldn’t have even been aware of one another’s existence were it not for a Spotify snafu that ignored their stylization differences and lumped their music together.

The singer, who said his and his brother’s love for mariachi music comes in part from their Spanish roots, decided to have a lawyer friend look into their options and legal obligations, while staring down the prospect of having to give away their debut album for free.

Less a week later? Don’t say social media never did anything for you. Friday, April 25, after the story had been picked up by websites like PandoDaily, Zamora received an email from the other badbad, which had abruptly changed their tune. Explaining that “If there is anything we stand for, it’s fair business,” Foster and Tyler said they had looked “deep within [them]selves” and decided to change their own band name. Zamora and his bandmates wrote back thanking them, adding that “&ldots;this week and the threat of losing our alias has been enlightening in helping us realize just how much we have grown to love the bAd bAd name over the years.”

Long story short: Spirits should be pretty high at this party.

Springtime in the Bay Area is beautiful — but if we’re being honest, to the casual observer, it doesn’t look all that different from any other season. Unlike on the East Coast, where the appearance of blossoms and warmer weather serves as sweet, necessary, not-a-moment-too-soon relief from the tyranny of extremity-numbing slush and sleet and monochromatic down-stuffed outfits, the arrival of spring in Northern California is more or less marked by temperatures maybe 5 to 10 degrees warmer than the ones January brought us.

So what sets spring apart? The shit-ton of stuff going on. Restaurant openings, film festivals, museum parties galore. And judging by my overflowing mailbox (yes, the physical, snail-mail one, though my email inbox is similarly bulging), it’s a very popular time for record releases. Here’s a sampling of other new releases from local bands to look for in the next month:

Future Twin have the distinction of being the only band I can think of that could get away with describing their sound as “punkadelic farmageddon moongayz,” and have a first-time listener go “Oh yeah, that pretty much makes sense.” The synthed-out, cinematic vocals-led three-piece has made a name for itself with energetic live shows over the last three years, but 2014 is shaping up to be the year they invade your living room. They’re in the middle of shopping their full-length debut, Wavelength Sovereignty, around to different labels, but in the meantime they’ve decided to reward loyal fans with a very hearty aperitif: Chillality, a five-song “cassingle” the band recorded at Fantasy in Berkeley, out Tue/29; they’re celebrating with a release show Wed/30.

With The Spyrails and What Fun Life Was

Remember way back in March, when our On the Rise issue told you about the irresistible It Factor in singer Annie Girl‘s stage presence? No? That’s ok, it’s been a rough few weeks for me too. Besides, I have a feeling that with the release of this band’s new EP, Pilot Electric, theirs is a name you’ll have a hard time avoiding in these parts; you might as well catch their spaced-out, hypnotic art-rock at this Fri/2 EP release/tour kickoff show, while tickets to their gigs are still cheap.

With Ash Reiter and Kera and the Lesbians

Oakland’s Whiskerman is another band that seems like it should be bigger given the affinity our current pop culture zeitgeist seems to have for smoky, Southern-flecked soul-rock. Graham Patzner is a natural frontman if there ever was one, the younger brother of Anton and Lewis Patzner (better known as the mind-blowing, metal-accompanying string duo Judgement Day), born to a symphony violinist and a symphony trombonist. Setting aside how unfair that seems for a minute, Whiskerman isn’t riding anyone’s coattails. Patzner’s clear vocals move fluidly through blues, gospel, and straight-ahead rock ‘n’ roll, accompanied by bass, guitar and drums, as well as his own talents on guitar, keys, and violin. Serious dance parties have been known to ensue; the new EP, Bad News, suggests this could be a continuing problem.

Of all the new releases that have come across my desk over the past month, none has made me feel quite so much like ditching work and taking a drive down 101-south with the top rolled down and the wind in my hair as Adult Life, the debut full-length from SF’s own garage-fuzz-pop five-piece Cocktails. Of course, I drive an ’88 Volvo with very few moveable parts, and wind’s never been very kind to my hair, but you get the idea. Unabashedly catchy and, in places, perfectly snotty odes to summer and relationships are delivered through sonic nods to our ’70s power-pop and classic punk heroes. The album’s not out ’til mid-June, but you can catch new songs at shows throughout May, like at the Make-Out Room May 12.

With Tiaras and Emotional

If there were any doubt that Oakland’s most loveable weirdos had staying power, last week’s firework-filled free Converse Rubber Tracks show at the Chapel — just before tUnE-yArDs took off on tour opening for the Arcade Fire — should have laid that to rest. Nikki Nack, out May 6, is full of R&B grooves and plenty of synthed-out weirdness, lest anyone was worried that singer Merill Garbus would get boring as she achieved more mainstream success. The band won’t be back in the Bay until a two-night stand at the Fillmore June 6 and 7 (with openers Sylvan Esso and Goldie winner The Seshen, respectively) but check this space next week — we’ll be checking in with Garbus from the road in the days before the album officially drops.