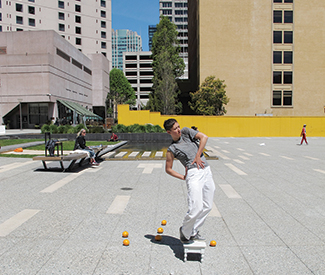 DANCE “Location, location, location” is real estate’s mantra, as those of us who keep running up against it know only too well. But location has also become essential to dance, especially for artists who want to forego the theater and make the outside world their stage.

Gently terraced and surrounded on three sides by glass and steel — but also the warmth of the old bricks of St. Patrick Church and the newer ones of the Contemporary Jewish Museum — Jessie Square opens itself to the greenery of Yerba Buena Gardens. The totality suggests an urban environment in which disparate perspectives (nature and culture, the past and the present, private and public spaces) harmoniously bump against each other.

In other words, Jessie Square was a perfect stage for Mann to send her dancer-disciples into a 40-minute performance in which they revealed different aspects of themselves, inspired by the way the Egyptian god Horus embodied multiple identities.

Each of the four — Christine Bonansea, Jorge de Hoyos, Jesse Hewit, and Sara Yassky — had developed a multi-sectional solo that, according to the preperformance information, was based on archetypes as derived from Caroline Myss’ book Sacred Contracts. Whatever the generating forces for these solos were, in performance they emerged and receded into the much larger activities at Jessie Square, the whole becoming a kind of moving tableau vivant. The dancers transformed lunchtime crowd actions — eating, talking, strolling, and waiting — into something beyond the commonplace. They injected poetry into daily life.

Generous and welcoming as these types of performances are, I personally miss the more intimate and more focused encounters that inside spaces offer. Mann and production designer David Szlasa stepped in with props or directions as needed. In a favorite moment, Szlasa’s breadcrumbs coaxed a flock of pigeons into a procession across the square. Mann pulled Bonansea up to her full height to send her off on an imaginary tightrope; she also shushed (or at least I think she did) Hewit’s screaming tantrum. Later on, when he sat immobile in a beggar’s pose, she brought him what I first saw as a fishing rod. It was a whip.

Eye is full of small incidents — some touching, some hilarious, some nonsensical — controlled by planning and a lot of serendipity. Hewit tried a shoulder stand, holding a carnation. De Hoyos raced along a diagonal as if shot from a bow. Yassick played what looked like a solitary game of bocce ball. Interspersing these lighter incidents were moments of anguish, lack of stability, and a sense of mortality. At one point or another, just about everyone looked dead as the plank that de Hoyos dragged around.

Bonansea bitterly wept as she put her clown makeup on; her mad laughter while racing the square became monstrous. Yassky, apparently in severe pain, rubbed a balloon against her belly and approached a passerby who politely put his phone away to acknowledge her.

Sometimes, the dancers disappeared in the crowd. I had lost sight of de Hoyos when someone pointed him out leaping and gesticulating on top of the parking garage. If there were any narrative suggestions, it was the ongoing give and take between de Hoyos and Mann. Or perhaps it was Bonansea marching up to de Hoyos, who had dropped to the ground after his lovely ballad fragment. In her best French rhetorical manner, the petite performer started a discourse (on, among other things, mortality) and the corpse in front of her. She finally decided that theory had run into reality and proceeded with mouth-to-mouth resuscitation.

If Bonansea was something of clown figure, the powerful Yassky seemed imprisoned inside her own body. She is a slender, gamine performer, and I don’t think I ever saw her relax. When she held her limbs tight to her body, they looked like they were enchaining her. When she crouched on a tiny stool on one leg, she repeatedly spilled water and salt offered to her. Whispering into a mike, she asked for help. Clawing her throat while lying on her back, she looked about ready to expire.

For all the portentous self-examination in Eye, the work was free-spirited, unpretentious, and yet quite serious. The boom box sound score, however, needs rethinking; much of it was too blatantly obvious. While Eye greatly benefited from its gorgeous location, at times it looked too thin, dissipating some of its energy. It probably will benefit from the additional performers — Sherwood Chen and a group of community volunteers — who will join the final show Sat/3. *

THE EYE OF HORUS