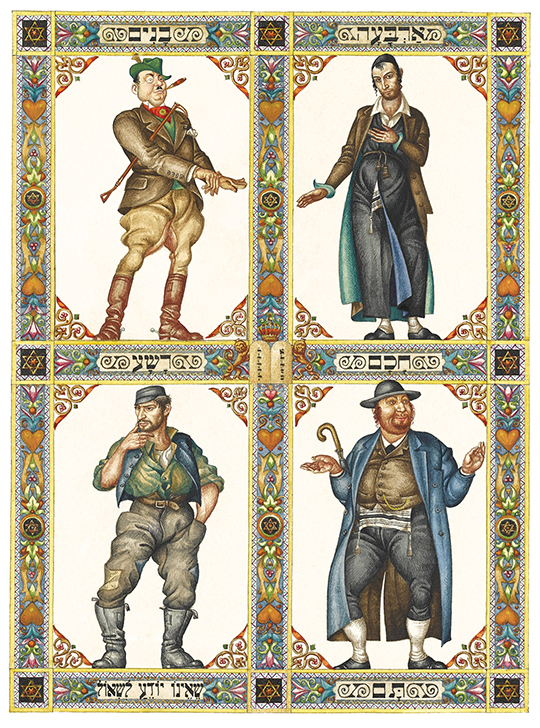 Passover ended last week — Bubbe’s back in Florida, gefilte fish leftovers have been composted, and matzoh crumbs no longer spangle your favorite hoodie. But the saga of an oppressed people throwing off its shackles under the auspices of a vengeful yet baffling god remains timeless. Arthur Szyk and the Art of the Haggadah, a magical exhibition at the Contemporary Jewish Museum (www.thecjm.org) through June 29, displays the story of the Jews’ ancient exodus from Egypt as illustrated in one of the world’s most beautiful books.

Szyk (1894-1951), a Jewish Pole who emigrated first to France in 1927 and then to the UK and US, was an ambitious and popular illustrator and artist whose work became more politically engaged with the rise of National Socialism in Germany. As early as 1933, he equated Hitler with the pharaoh of the Torah in his work. This eventually led to a fully illustrated Haggadah, the Passover dinner ceremony guide that retells the story of the Jews’ flight from Egypt.

Taking what seems like equal influence from illuminated medieval manuscripts, Art Nouveau style, Eastern European folk art, and satirical cartoons, the 48 exquisite illustrations teem with contemporary references — for example, the “wicked son” in the story of the four sons sports a Hitler-like mustache. (Many of the drawings also prominently featured swastikas, until they were painted over upon the book’s release in 1940, perhaps in capitulation to the British publisher.)

Beyond the prescient political bite, though, of this classic book — like many Jewish kids, my husband received a replica as a bar mitzvah present — lies its sheer artfulness. The small pages, Mughal miniature-like, brim with gorgeous calligraphy, eye-popping design elements (Szyk based his layouts on graph paper), touching portraits, and a veritable bestiary of symbolic animals. It’s an epic piece of storytelling, which has become part of the epic story itself.