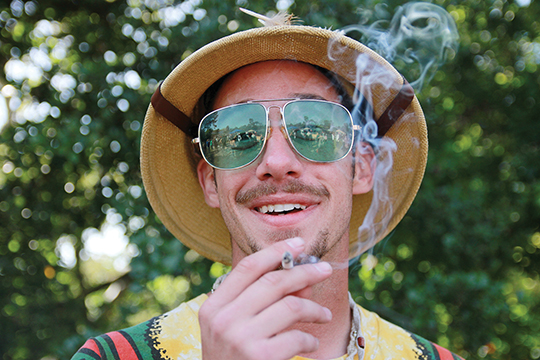 It was April 20 in Golden Gate Park, the fabled 4/20 in the parlance of pot smokers, and we found Nick and Chris standing under the shade of a tree with a cluster of friends, including Geoff, the proud owner of a five-foot bong.

Nick had done several hits through the supersized smoking device that day. Beside him, Chris took hits from his own handheld bong. “I’m feeling good,” Nick reported. “But I’m also kinda hungry. I could go for some Chinese food. Ohh, and some Sapporo!”

Administering a hit of marijuana through such unwieldy paraphernalia is quite the operation, requiring one person to stand and hold one end, another to light the marijuana once it’s packed into the bowl, and a third to inhale the five-foot column of milky smoke that rises through the chamber. The smokers on the receiving end contorted their faces as they inhaled, inevitably coughing and laughing as they breathed out, seemingly amazed by the experience. The college-age friends were in 420-induced bliss.

The annual 420 celebration in Golden Gate Park is unpermitted, with no official organizers, yet thousands of festivalgoers nevertheless flock to it year after year. It’s a quintessentially San Francisco experience: Young and old congregate for a collective daylong smoke-out, bringing drums, dogs, grills, shade structures, hand-blown glass, tie-dyed tapestries, Hacky Sacks, sound systems, and other picnic paraphernalia along with them.

The area around Hippie Hill — at the eastern end of the park, near Kezar Stadium — was a jumble of humanity crammed elbow to elbow, reeking of pot smoke. The crowd reflected a wide range of ethnicities and brought out many displaying an outlandish sense of fashion, sporting shiny plastic marijuana-leaf necklaces, sleeve tattoos, piercings, face paint, and piles upon piles of dreadlocked hair.

The movement to legalize marijuana for medical purposes started in San Francisco, the lovechild of the city’s hippie movement and its caregiving response to the AIDS epidemic. It was Dennis Peron and other activists here who wrote Proposition 215, the statewide legalization measure that California voters approved in 1996.

A decade ago, the San Francisco Board of Supervisors approved a comprehensive set of regulations for its two dozen or so medical marijuana dispensaries, guidelines that have proven to work well and be a model for other jurisdictions to follow, elevating pot purveyors into accepted members of the business community (see “Marijuana goes mainstream,” 1/27/10).

Some have even begun to regard the Bay Area as a model for how to implement a sensible approach to regulating marijuana. On April 16, US Rep. Dina Titus (D-Las Vegas) traveled to San Francisco on a fact-finding mission after Clark County, Nevada legalized medical marijuana, with Las Vegas and other Nevada cities expected to follow shortly.

“I want the state to learn from someone who’s done it right,” Titus told the Guardian as she toured The Apothecarium on Market Street, an elegant dispensary reputed to be one of San Francisco’s finest.

In addition to helping guide Nevada’s implementation of medical marijuana legalization, Titus said she’s working on federal legislation that would better protect small businesses involved with a marijuana industry that is growing rapidly in the US, thanks to Colorado and Washington taking the next step and legalizing even recreational uses of marijuana.

For example, Titus wants to make sure marijuana businesses have full access to banking services, something that the US Department of Justice has occasionally interfered with. As Titus told us, “The federal government shouldn’t be wasting time and going after people who are abiding their state laws.”

Back at 420 on Hippie Hill, Amber and Charlie lounged on a blanket with Gizmo, an affectionate pooch they’d adopted from “this guy who lives in a tree house” in Santa Cruz. The young couple, ages 18 and 20 respectively, had hitchhiked to California from Washington. Yes, “we may have done some weed,” Charlie said before letting out a peal of laughter.

“It’s been pretty awesome,” Amber said. “Literally, there was smoke coming from everywhere,” the moment 4:20pm arrived. As far as the eye could see, she said, the scene was nothing but “people smoking weed. It was crazy.”

Lilian was at the park with a friend, wearing a crown of daisies she’d woven with flowers plucked from nearby the park entrance. “All day we’ve been doing joints and blunts and pipes,” she explained. “We haven’t had any bong hits yet, but we had a couple vape hits, because they were like giving free test trials here at the park. So we were like, alright, why not?”

Lilian exulted the “positive vibes” of the event, but it wasn’t all weed and roses. A short while later, reports of gunfire sent police cars racing into the park with sirens wailing. While police later reported that they never found evidence of anyone actually discharging a weapon, two different individuals were arrested on charges of possessing a firearm.

Emergency personnel responded to four medical calls, police reported the following day, including one person who had a seizure, someone who suffered an abrasion at Haight and Ashbury streets, and two underaged individuals who experienced problems after becoming overly intoxicated. For a crowd of thousands pushed the boundaries of indulgence, quite a small number suffered harm.

Eight other arrests stemmed from charges of selling marijuana or possessing it for sale, possession or sale of opiates, one warrant arrest, and another on charges of “malicious mischief,” according to police.

A few days before the unpermitted gathering, city officials held a press conference announcing a “comprehensive plan” to crack down on the anticipated debauchery, which included not only the Golden Gate Park marijuana celebration but the “Hunky Jesus” competition, a countercultural hallmark held annually on Easter Sunday in Dolores Park.

“Last year we had a lot of challenges,” said Sup. London Breed, whose District 5 encompasses Golden Gate Park. “We need to make the city and streets safe this year. We want people to come and enjoy San Francisco, but we also want them to respect San Francisco.”

Thus, city agencies ramped up deployment of both plainclothes and uniformed police officers, and sent out more parking and traffic control officers.

The previous year, when massive amounts of debris had been left strewn throughout the park, it took 25 city employees over 12 hours to clean up five tons of trash left by intoxicated visitors, said Phil Ginsburg, general manager of the city’s Recreation and Parks Department. The Department of Public Works’ tab for cleanup exceeded $10,000.

But the main draw of the event, in true San Francisco fashion, was behavior Police Chief Greg Suhr hinted in advance would essentially be tolerated. “The sale of marijuana is still a felony,” Suhr emphasized, “but I don’t think [the SFPD is] naive enough to believe that we can stop people from smoking on 4/20.”

Advocates for legalizing even recreational use of marijuana had hoped to make the November ballot this year, but the campaign’s signature-gathering effort has sputtered out.

Sponsored by the California Cannabis Hemp Initiative, the legalization measure was named for Jack Herer, a renowned cannabis advocate who passed away in 2010. The campaign is now ramping up for another try in 2016, when some advocates hope the presidential election will drive younger voters to the polls.

But while efforts to legalize weed in California for recreational use falter for now, the legitimate use of cannabis for medicinal purposes has giving rise to healthy businesses and research on health benefits. At the April 16 event at the Apothecarium, Titus had lots of questions for Allie Butler, an expert in marijuana who has a master’s degree in public health and told Titus, “I want to do cannabis research for the rest of my life.”

Butler introduced Titus to the various strains of marijuana, explaining what ailments each is good for. The CaliWidow can be a cure for headaches, she explained, and Blue Dream is “good for nausea. We prescribe that for cancer patients all day.” She indicated another strain, saying, “this is the Jack Herer, it’s my mom’s favorite.” Fancy, knowledgeable, and above ground, this isn’t your mom’s marijuana business anymore.