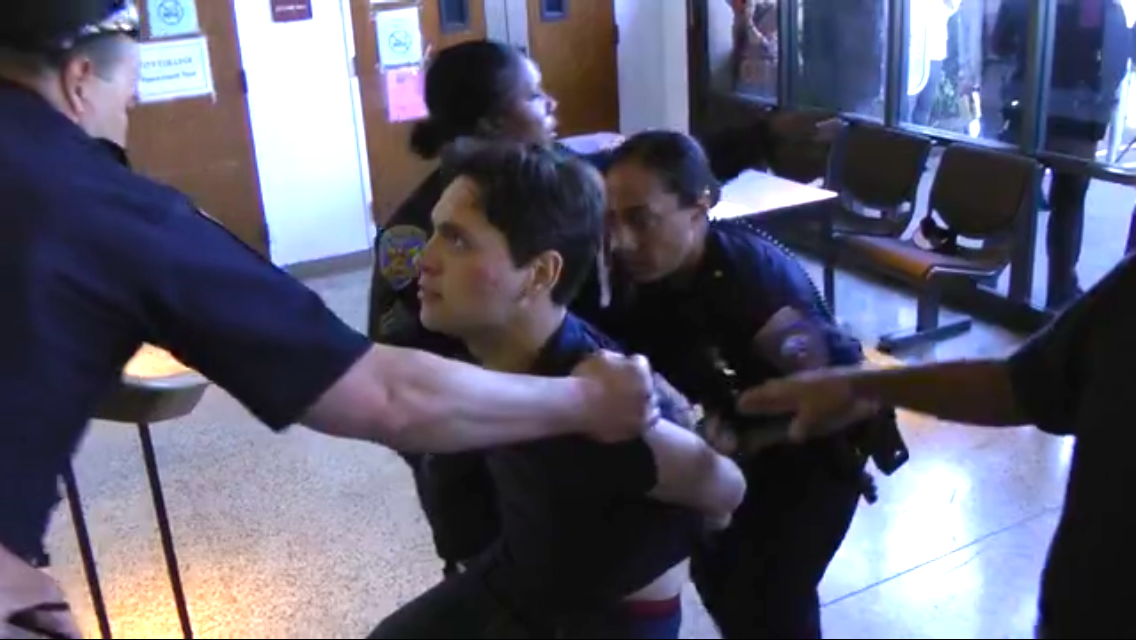 Protests against City College of San Francisco’s leadership trumpeted grave concerns in the college community over the lack of public voice at the school. Now, some of those concerns have been resolved, and the beleagured CCSF is taking baby steps towards restoring democracy.

Special Trustee Robert Agrella announced via mass email today the return of public comment to City College board meetings, and, well, actual meetings. Local college officials praised the move as a step in the right direction.

“Perhaps the restoration of some level of openness will make people feel their voices are being heard,” said Fred Teti, the college’s Academic Senate president. The school’s senate only yesterday passed a resolution urging Agrella to restore public comment, Teti said, and with good reason.

Though the mention of board meetings may be elicit a shrug or a snooze for some, for City College students the right to speak out publicly to school leaders was important enough to be jailed over. Only last month, hundreds of student and faculty protesters stormed the school’s administrative building, and in the violent clash with SFPD and City College Police, one student was pepper-sprayed and another punched in the face.

Both were jailed afterward, and one of the students said all he wanted was a dialogue.

“We just want to have a conversation with Bob Agrella,” Dimitrious Phillou said in a video interview with the college’s newspaper, The Guardsman. “It’d be nice if he would talk to us, like a real human.”

And changes to City College are coming spitfire-fast. After they got word from their accreditors that they may close in July of this year, the school has scrambled to reshape classes offered at the school to meet the requirements, and vision, of their accreditors. Agrella was appointed by the state to take the place of the college’s duly-elected Board of Trustees — and therein lies the issue.

Not everyone agreed with the board, and many members through the years have been accused of laziness, incompetence, and worse. But at the very least, the college community had a monthly opportunity at public meetings to tell the board what was right and what was wrong, leading to many decisive turnarounds: budgets amended, classes saved, services restored or cut.

It was an imperfect process, but at least a forum existed to give the public the right to address their officials in full view of the public. Under Agrella, no such forum existed.

Student and faculty shout “let them speak!” at a City College board meeting.

When Agrella took over the powers of the board, the idea was to expedite decision-making in order to save the college. But this meant an end to the meetings. Though he posts the agendas for his decisions online, he held no public meetings, and only solicited “public comment” via email, which many rightly noted were not public at all.

“Apparently these meetings are happening in the special trustee’s head,” Alisa Messer, the City College faculty union president told the Guardian in our story, “Democracy for None [3/18].” “No one agrees that [email] comment is public.”

That will change April 24. Agrella will hear public comments at 4pm at City College’s main campus in the Multi Use Building, Room 140. Unlike meetings of City College’s full board, Agrella’s public comment session will not be televised or audio recorded. When we asked why, college spokesperson Peter Anning said he would look into it.

Anning added that Agrella did issue one warning. “He was very clear that this was going to follow board policy which will require civil discourse,” Anning said in a phone interview. “That’s been an experience in the past, where people have gotten belligerent. He said he won’t tolerate that.”

“I think Bob is a problem solver, he’s a practical guy,” Kamer said. “If there was concern and discontent about public comment, I think he just wanted to deal with it before it became a problem.”

Messer applauded the decision as a step in the right direction, but cautioned that it was a small step in terms of restoring City College’s democracy.

“Of course, at any moment Dr. Agrella could — and should — restore actual board meetings,” she told us. “He could even include the voice of the voters by convening our publicly elected Board of Trustees.”

The Board of Supervisors unanimously passed a resolution last month urging Agrella to do exactly that.

But, as Teti told the Guardian, sometimes you need to recognize that victories come incrementally.

Thinking Agrella would restore the Board of Trustees, video airing of public comment and full meetings all at once is perhaps a stretch, he said, “That’s the pie in the sky idea.”