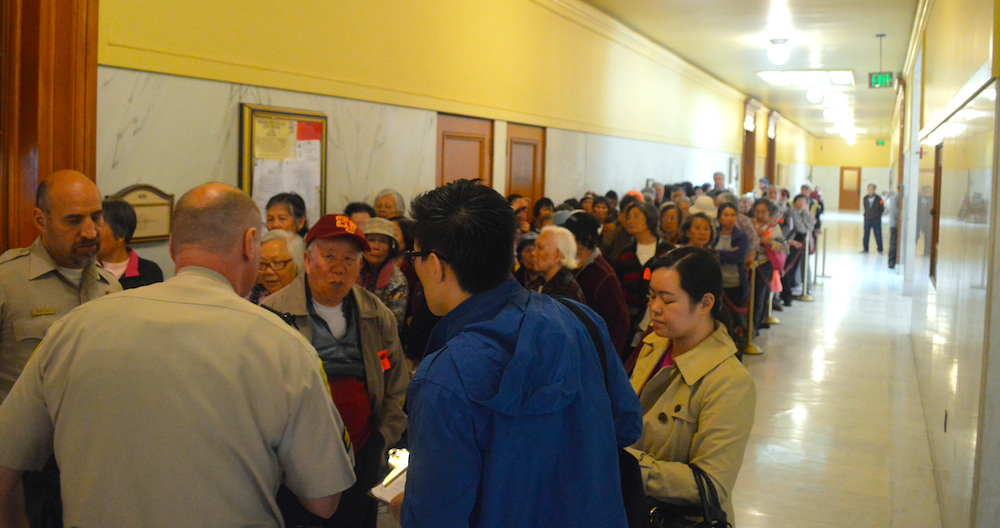 San Francisco transit riders won some and lost some today [Tue/15] at the San Francisco Municipal Transportation Agency’s Board of Directors meeting. The board voted to repeal Sunday parking meters, effective July 1. It also asked SFMTA Director Ed Reiskin to add 18-year-olds into the Free Muni for Youth program, which will take effect Nov. 1.

But a proposal for free Muni for seniors and the disabled hit a snag, and the board decided it would evaluate their budget in January 2015 to identify available funding for the program. Until then, the program is in limbo.

“I think free Muni for seniors and people with disabilities is a great need, it’s a moral imperative,” said Tom Nolan, chairman of the SFMTA board. “It’s not a question if these things will happen, it’s when.”

Nearly 100 of advocates for the Free Muni For Youth and Free Muni for Seniors and the Disabled programs packed into the small board chamber at City Hall Tuesday. Some came in wheelchairs, others walked in carefully with canes, and small children bounded into the chamber playfully. At least 100 more people waited outside the doors of the chamber in line to speak. All came with a purpose: to tell the SFMTA that free Muni would help them live in a city increasingly inhospitable to poor and middle class San Franciscans.

“To some people $23 may not be much, but to (seniors), every penny counts,” Pei Juan Zheng, vice president of the Community Tenants Association told the board at public comment. She spoke in Cantonese, and was later translated by a woman at her side. “I know some senior couples who can only afford one Muni pass and share it, taking turns to go on doctor’s visits.”

Many public commenters reminded the board that free Muni for the disabled and seniors could be paid for by paid Sunday parking meters, which the SFMTA ultimately decided to repeal. The SFMTA’s budget proposal estimates free Muni for seniors and the disabled to cost about $4 million annually. Conversely, repealing paid parking meters is estimated to cost Muni $9.8 million annually. SFMTA spokesperson Paul Rose said the loss could actually be as high as $11 million.

The reason for repealing the paid parking meters was made clear as day: Mayor Ed Lee and the SFMTA board are tip-toeing around car-driving voters, afraid several ballot measures to fund Muni this November will tank. To that end, they’re willing to appease drivers however they can.

“It’s clear we don’t have support for (paid Sunday meters),” board member Joel Ramos said after the vote. “We have failed, frankly, to convince the great majority of people. Read [San Francisco Chronicle columnists] Matier & Ross and see the sentiment out there, it’s a negative one.”

For his part, Mayor Lee was pleased the board enacted his repeal proposal. His statement to the press released shortly after the vote laid clear his need to appease car-driving voters.

“Repealing Sunday parking meters is about making San Francisco a little more affordable for our families and residents on Sunday, plain and simple,” he wrote in his statement. “Instead of nickel and diming our residents at the meter on Sunday, let’s work together to support comprehensive transportation funding measures this year and in the future that will invest in our City’s transportation system for pedestrians, bicyclists, transit riders and drivers alike.”

Just two weeks ago, Reiskin suggested reducing enforcement of Sunday meters, perhaps in efforts to find a compromise. He has repeatedly publicly stated his support for paid Sunday meters. Apparently he was outnumbered.

There are silver linings. In January the SFMTA board will mull a 7 percent transit service increase for 2016, additional funding for cleaning Muni’s fleet, and providing free Muni for low and moderate income seniors and disabled. The wait is due to the uncertainty of June contract negotiations with Muni workers, as well as the impending Muni funding ballot measures in November. If all goes well, the board said, funding may be identified for all of those projects. Until then, the loss of paid Sunday meters means Muni is out $9.8 million a year out of its $677 million budget.

The repeal of the paid markers doesn’t just hit transit riders though. Local businesses may also lose out.

Back in our story “Muni Fare Shakedown [2/25],” Jim Lazarus, senior vice president of public policy at the business-friendly San Francisco Chamber of Commerce, told us he is a supporter of the paid Sunday meters. “You can drive into merchant areas now where you couldn’t before,” he told us.

Near the end of public comment, Cynthia Crews of the League of Pissed Off Voters put the board’s vote into context.

“The MTA’s purpose is to manage the effing streets, not do the mayor’s bidding,” she told the board. “This is a $9 million giveaway no one is asking for but Ed Lee.“

Tweets from the SFMTA board of directors meeting

SFMTA mtg when 2-year budget could be passed is so full even media having trouble getting in http://t.co/8OZuZdPjXM pic.twitter.com/tNnRTsmNFS

Everyone’s favorite @sfchronicle curmudgeon @cwnevius is locked out of the SFMTA board meeting too. pic.twitter.com/PxyuqaQEDj

At @sfmta_muni meeting, SFUSD disability education program “The Arc” rep: “We want to make sure you know we exist” asks for free #muni

Mario Tanev of the @SFTRU to the @sfmta_muni board on Sunday meters: “your own study shows meters are beneficial to businesses and shoppers”

Poet and activist Tony Robles is up, speaking to @sfmta_muni: “Many seniors are outright targeted for eviction…”

Tony Robles to @sfmta_muni “bottom line is, living in San Francisco is not cheap for seniors. Seniors, quite frankly, need a break.” #Muni

These advocates from POWER said they were “surprised we had to be here again” to advocate for free #muni for youth. pic.twitter.com/EnuzNCR6Ip

Supervisor @ericmar415 to SFMTA board: “baby boomers like you will be seniors soon. They struggle with isolation.” pic.twitter.com/RZc7x3F7Eb

@FitzTheReporter The “best political minds” doing the political calculus that “no one likes meters” must not have double-checked their math.