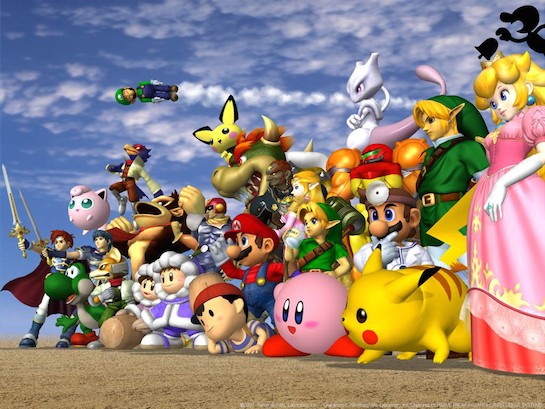 The Nintendo game Super Smash Bros. Melee was supposed to be a party game, “fun for the whole family,” as the kids say.

Mario sets Princess Zelda on fire. Donkey Kong smacks Pikachu so hard the little yellow rodent flies across the screen. Commercials for one version of the game feature Bugs Bunny-esque cartoon smackings, as costumed actors roll down a grassy knoll. The adorableness of Melee belies a mystery: How did a Nintendo game from 2001 become the focus of cutthroat national video game competitions?

A documentary playing at the Roxie this Sunday, The Smash Brothers,  tells that tale, following seven competitive gamers as they thumb their joysticks furiously, competing for prestige.

Remember the 80s Fred Savage flick, The Wizard? In it, Savage dons his Power Glove and competes to be the world’s best Super Mario Bros. 3 player. Same difference, only this isn’t fiction, and the name of the game is Super Smash Bros. Melee.

Melee is a crossover “brawler” video game featuring Nintendo characters from a myriad of its franchises, some famous, some not: Super Mario, The Legend of Zelda, Star Fox, Donkey Kong, Pokemon and more. Heroes fight heroes, villains fight villains, and everybody fights everybody — it’s like watching the Nintendo equivalent of Superman versus The Joker versus Spiderman in a free for all battle, a silly, grand ol’ time. At least at first.

The opening title sequence to Super Smash Bros. Melee, on the Nintendo Gamecube.

The game, released in 2001, was soon discovered by ultra-competitive video gamers, known in the community as Smashers. Melee spawned regional, then national tournaments, and cash prizes and collectives of frenzied gamers playing to this day. Three local Smash-fans, Ross Boucher, Saikat Chakrabarti and Supratik Lahiri saw the documentary and clamored to bring it to the big screen in San Francisco.

Their reasoning was this: Despite the fan following remaining strong for 13 years, Melee is still on the fringes in the competitive video game world (a fringe of a fringe, if you will). Competitors for more mainstream games, like League of Legends, garner big cash sponsorships from Mountain Dew and other companies. Melee only jumped back into the competitive circuit last year.

“The fascinating thing about Smash is that relatively speaking, it’s a pretty small, tight community,” Lahiri told the Guardian. In a video game world played mostly online and with distance between players measured in the thousands of miles, this is unique.

“Everyone knows each other,” he said.

There are 1,400 members of the Official NorCal Melee group on Facebook, still holding tournaments in and around San Francisco to this day. About 50 or so competitors pop up at Folsom Street Foundry  (in SoMa) for Tuesday Game Nights, where they get their smash on. (Yes, I said it. No, I won’t take it back).

A tournament Melee match between Ken and PC Chris.

Lahiri is in awe of their technical proficiency.

“I’m really bad at all these games. Whenever you think ‘oh i’m a little good,’ you learn better,” he said. “I went to the Folsom Street Foundry, and watching the players’ hands, they’re on a totally different playing sphere.”

The speed of play is so vital to the fighting between say, Mario and Link, that TV speed becomes an issue. Modern televisions’ fancy HD features create heavy lag times between button pressing and onscreen motions.

“With Smash there’s a whole debate about which television you use,” Lahiri explained. “Smash still is mostly played on old CRTs (televisions). They’re a pain to deal with because they’re heavy and bulky, but the competitive scene thrives on the response time.”

But for all the love of Melee from the competitive community, the video game’s creator hasn’t loved them back. Smash Bros. franchise creator Masahiro Sakurai told gaming press repeatedly that he doesn’t agree with turning Melee into a competitive game. “Fighting games have a very high barrier to entry for new players, while Smash was always meant to appeal to lots of people from different gaming communities,” Sakurai told gaming outlet Gamespot last year.

Lately he’s changed his tune. In a video broadcast from Nintendo only this week, Sakurai seemed to acknowledge the Melee competitive community. The new Smash Bros. sequel (due out this winter) will have a “For Fun” and “For Glory” mode, he announced. The “For Glory” mode reflects many of the rules (no silly weapons, people!) and stages (flat only, less jumping!) that competitive Smashers favor.

Though The Smash Brothers film is a brisk four hours, the movie will be halved by an intermission featuring a Q&A with the film’s director, Travis Beauchamp.

The whole point of Sunday is the love of the game, Lahiri said. The last question The Guardian asked is the most important of all: what character do you play with? This is important knowledge in the Melee community, demonstrating fighting temperament.

“Officially i’m a Captain Falcon player,” he said. Captain Falcon is known for his trademark “Falcon Punch!” catchphrase, twisted into memes all over the inter-webz. Lahiri uses a competitive (and silly) character, but remains humble about his skills. “Let me put it this way, the director, Travis, is better at the game than I am.”

Tickets to The Smash Brothers are $10 online, and $15 at the door. All of the proceeds will go to the Child’s Play charity, which donates video games, books, and toys to children in hospitals all over the US.