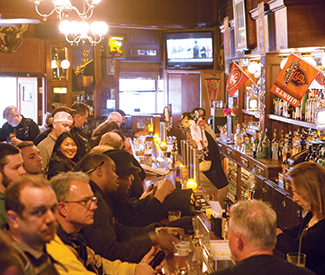 THE WEEKNIGHTER Sutter Station doesn’t give a fuck. In fact, it has been steadfastly sitting on Market Street, not giving fucks since 1969. That’s before BART existed, before Tales of the City came out, and before the Beatles broke up. The United States was still tangled up in the Vietnam War when Sutter Station first opened its doors to show San Franciscans what not giving a fuck looked like.

Sutter Station is a weird and wild place. And I don’t mean weird like “Ooh, look at him, he’s walking down the street in a tutu.” And I don’t mean wild like a bunch of drunk bros screaming WOOO when their friend takes a shot. I mean weird in a disconcerting way and wild in the sense that you may genuinely get your ass kicked for acting stupid. Sutter Station is a working class bar somehow still in the heart of downtown San Francisco where Budweiser is always $3 and sometimes people get physically tossed out the back door. Those people generally deserve it, too.

There’s a legend about Sutter Station. There was once a lingerie show there. That’s it. That’s the whole legend. Stepping inside the joint you can tell that’s enough. Sutter Station is like if a Tenderloin dive bar walked over to the Financial District for a change of scenery and decided to stay. You ever sat down in a bar in the TL and said, “Gee, I wish there was a lingerie show here”? That’s my point. Some legends are legends for a reason.

Sutter Station isn’t all hard motherfuckers though, as the week draws on the crowd gets pretty diverse. People who say they “work in the FiDi” pop in for happy hour beverages, filling some of the tables with women in pencil skirts and men with their shirts tucked in. Both these genders wear North Face fleeces for some reason.

You do actually see some of these same people during other hours as well. Sometimes the ones with a drinking “preoccupation” dip in for a liquid lunch where they know none of their colleagues will find them, while others hang out far after happy hour tipsily making friends with people they’ll ignore when passing on the street the next day. Sutter Station attracts all kinds for different reasons. It attracts me for the free pizza they put out on Fridays.

As real bars keep disappearing, only to be replaced by more and more craft cocktail joints, the importance of spots like Sutter Station grows. Bars are supposed to be where you unwind, have a drink, and let the day slide off you. They are there to help make merry, make friends, make lovers, make amends. I like a really nice cocktail just as much as anyone, but even more so, I like just having a drink and seeing what happens from there. The beauty of Sutter Station is that anything can happen from there. As spots like Sutter Station become harder to find in San Francisco, I can’t help but give a fuck. Luckily, Sutter Station doesn’t.