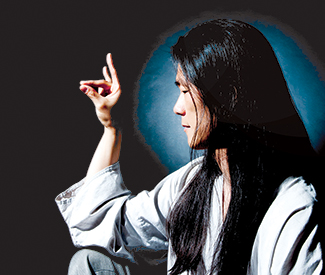 Sitting cross-legged on a pillow on the hardwood floor of a bare room in East Oakland, Korean-born, conservatory-trained composer JooWan Kim is doing two things that aren’t usually paired together: Conducting an elaborate, traditional tea ceremony and expressing his passion for N.W.A. Kim thrives on unexpected combinations: The composer, who spent seven years in Berkeley studying Zen meditation and Taoist internal alchemy (breathing exercises, he explains), has just finished his second of three arrangements of songs from Enter the 36 Chambers, the Wu-Tang Clan‘s seminal 1993 debut.

Most people are not JooWan Kim.

The result is a sound that juxtaposes the rapid-fire staccato of rap with the bombastic percussiveness and dramatic tension of western classical music. It’s unapologetic and truly like nothing else.

Kim, who moved to the US from Korea at age 20, had a somewhat different upbringing from your average hip-hop enthusiast. “My parents listened to classical music, and just like all Asian kids, I had the choice of playing piano or violin,” he says. ” I liked the piano.” He emigrated to study at Boston’s prestigious Berklee College of Music, then followed it up with a masters in composition from the SF Conservatory of Music. It was while at the Conservatory that Kim first began experimenting with a classical/hip-hop hybrid, presenting the first live piece “as a joke” in 2005. He began to consider doing it seriously when the performance received some unexpected attention from local press and musicians.

His first experience as a hip-hop listener, however, was less encouraging. “I hated them. I hated them so much, with a passion,” Kim says of the first songs he heard. Not a native to the language, he struggled to interpret the music. As his English began improving, however, his attitude towards hip-hop changed. “Once I realized the social context and the kind of things that they were saying, it blew me away. I could understand the necessity in the music — it’s a very sincere and powerful expression,” he says. “If you listen to concert music, it doesn’t have the same urgency,” says Kim, who has decided to prioritize making music for a broad audience (what he calls “pop”).

A broad audience is indeed front and center for EMN. The orchestra is returning to Yoshi’s Oakland on April 17 to preview the Wu-Tang arrangements, in addition to an upcoming residency at the Red Poppy Art House. The group has been performing in rooms normally considered rock clubs — Milk Bar, Brick & Mortar Music Hall, The New Parish — and are raising funds for their debut EP.

Kim’s hardly alone in his embrace of cross-cultural pollination. To celebrate their 21st anniversary, the Yerba Buena Center for the Arts commissioned the orchestra to arrange a total of six pieces for a November show called Clas/Sick Hip Hop II: 93 Til’ (a nod to local hip-hop legends Souls of Mischief, and the significance of the year 1993 in hip-hop). YBCA Director of Performance Marc Bamuthi Joseph affirms: “It is part of my gig to authentically recognize hip-hop as a great canonical American form.”

Joseph picked Kim as an arranger for his project in part because of his fresh perspective, coming from Korea and the conservatory — “there’s a playfulness that’s possible,” not being weighed down by certain historical precedents, he says. Though Joseph recognizes the s substantial history of both hip-hop and classical music in the Bay Area, he says he wasn’t entirely surprised that it took an outsider to fuse the two.

“When I came here, I realized it was very different in the sense that pop music was deeply associated with subcultures,” explains Kim. “Koreans don’t have that. Europeans don’t even have that either, in terms pop music. I thought that was weird, so I continued to listen to whatever I wanted to.” What marks EMN as unique is the marriage of classical techniques to this omnivorous disregard for cultural authority (a definitively hip-hop attitude).

Indeed, JooWan Kim has a bit of a rebellious streak. “I decided to add drums and MCs to make people pissed off, and certainly I did,” Kim says of his first performance with the Ensemble. As he walks over to a grand piano to play selections of Wu-Tang’s “Shame on a Nigga,” there is a striking contrast between Kim’s clear delight in ruffling feathers and his calm, controlled demeanor, maintained through two to three hours of meditation each morning — a practice Kim began after studying with Taoist master Hyonoong Sunim at the Zen Center in Berkeley.

Kim believes meditating has transformed both him and his music. “It’s the most valuable thing I’ve ever done,” he says. “I don’t feel angry or depressed that often anymore. I’m at a point where I can let things pass.”

He reflects on the artistic potential that has opened up as he finishes his tea. “A lot of times people have it backward in terms of understanding art or music — that you’re learning all these techniques and then you’ll somehow write this great music,” he says. “It’s actually the other way around. All these qualities that you have, anger or depression or love: they come out in the music. That’s why people who didn’t learn anything about music can write great music, because they somehow overcame themselves.”