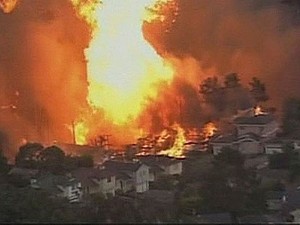 A federal grand jury in San Francisco yesterday issued a criminal indictment against Pacific Gas & Electric for negligence in the 2010 gas pipeline explosion in San Bruno that killed eight people and destroyed an entire neighborhood. That’s significant and serious, but it also falls far short of what this rapacious company and its conniving executives — none of whom face personal criminal charges — should be facing.

The indictment and media reports on it omit key details of what happened leading up this tragic and entirely preventable explosion, buying into the fiction that there is a meaningful difference between PG&E Co., the regulated utility, and PG&E Corp., the wealthy and powerful Wall Street corporation. This is a stark example of how corporations are given all the rights of individuals, but accept few of the responsibilities, with the complicity of the political and economic systems.

The 12-count indictment focused on violation of the Pipeline Safety Act, which requires companies to maintain their potentially dangerous pipelines, including keeping detailed records and doing safety inspections that would detect flaws like the faulty weld that caused the San Bruno explosion on Sept. 9, 2010 – work the company negligently failed to perform.

But PG&E’s wanton disregard for public safety, combined with the greed and shameless self-interest of then-CEO Peter Darbee and other executives, goes far deeper than that. A report by the California Public Utilities Commission released in January 2012 found that $100 million in ratepayer funds that had been earmarked for pipeline maintenance and replacement, including this section in San Bruno, was instead diverted to executive bonuses and shareholder profits.

“PG&E chose to use the surplus revenues for general corporate purposes,” the audit said, noting that the company was flush with cash at the time and there was no good reason to neglect this required maintenance.

And in 2010, those questionable corporate purposes included spending more than $45 million to write and promote Prop. 16, a June 2010 ballot measure that would have required approval by two-thirds of voters whenever cities wanted to start community choice aggregation programs such as San Francisco’s proposed CleanPowerSF. California voters rejected that outrageous ruse by more than a 2-1 margin – so Mayor Ed Lee and his appointees were forced to kill CleanPowerSF on their own last year.

PG&E maintains the explosion was just an accident.

“San Bruno was a tragic accident. We’ve taken accountability and are deeply sorry. We have worked hard to do the right thing for victims, their families and the community, and we will continue to do so,” PG&E CEO Tony Early, who was hired after the explosion, said in a prepared statement. “We want all of our customers and their families to know that nothing will distract us from our mission of transforming this 100-plus-year-old system into the safest and most reliable natural gas system in the country.”

But this “tragic accident” was foreseeable and preventable, particularly if PG&E was spending our ratepayer money on the system maintenance it was allocated for, instead of trying to fool us with a deceptive and myopic political campaign. Those were decisions made by real people, including Darbee and others, decisions that killed innocent people – and they should be held accountable. Neither this indictment nor a previous civil settlement go far enough.

PG&E’s employee union, IBEW Local 1245, continues to act as an apologist for the company executives, issuing a statement that in part says, “The federal indictment filed April 1st against the company says that PG&E willfully failed to identify and evaluate threats to its transmission pipelines. We know of nothing that would rise to the level of willful. It is possible there are things we don’t know. But based on what we do know, the company failures that led to the San Bruno explosion were not willful.”

Meanwhile, even some PG&E shareholders are siding with the company’s federal prosecution while bringing a shareholder lawsuit seeking to recover some of the diverted funds. Their high-powered attorney, Joe Cotchett, issued a statement today that said, “We welcome yesterday’s indictment by the federal grand jury of PG&E on criminal charges that it violated federal pipeline regulations. It is clear the federal government agrees with us that PG&E chose profits over safety. The indictment comes as no surprise, as it closely mirrors the detailed complaint we filed months ago against PG&E’s officers and directors, after our own extensive investigation.  The indictment states that PG&E ignored and failed to properly identify potential threats to gas pipelines, failed to gather relevant data, maintained flawed records, and as a result, was unable to accurately assess the dangers related to its lines that could have prevented the explosion. On behalf of the shareholders of PG&E, we intend to amend our complaint to add some additional facts stated in the indictment.”

“Our complaint alleges that PG&E’s executives dropped the ball and failed to implement safety measures despite numerous red flags raised by Company insiders with risk management responsibilities. We allege PG&E has already incurred charges of about $1.83 billion related to the San Bruno accident and natural gas matters. In its annual report, PG&E admitted that this criminal investigation could expose the Company to even greater losses. Our complaint also alleges that PG&E’s Board sponsored reviews of its risk management practices revealing that PG&E was in ‘crisis’ mode prior to the accident, and that, in 2007, PG&E’s newly-hired Senior Vice President of Engineering and Operations determined that the Company’s Enterprise Risk Management program ‘seems unactionable because almost everything is broken.’”

This is the company that Mayor Lee praises as a “great company that gets it,” supporting its continued monopoly control of San Francisco’s energy system and subverting a city proposal to provide renewable energy to city residents, even as the threats posed by global warming increase, as this week’s report by the United Nations Intergovernmental Panel on Climate Change warns.

This is a sick system, and something needs to change.