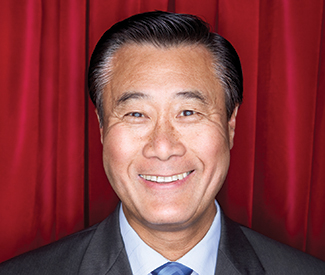 San Franciscans awoke March 26 to the surprising news that state Sen. Leland Yee (D-SF) had been arrested on federal corruption charges as part of early morning police raids targeting an organized crime syndicate based in Chinatown, along with reputed gangster Raymond “Shrimp Boy” Chow and two dozen others.

Yee had a reputation for sometimes trading votes for campaign contributions, a perception that had only gained strength in recent months as he launched his first statewide campaign, running to lead the Secretary of State’s Office, casting key votes for landlords and big industries that he refused to explain to local activists.

So in a year when two other Democratic Senators have also been stung by federal corruption and bribery probes, the televised image of Yee in handcuffs wasn’t beyond the realm of possibilities. It was surprising, but not shocking.

Yet by the mid-afternoon when the 137-page federal criminal complaint was unsealed and journalists started reading through what undercover FBI agents had discovered during their five-year criminal investigation, it read more like a sensational organized crime and espionage novel than a court document, a real page-turner that just got more wild and incredible as it went on.

What began with the FBI investigating a murder and leadership transition in the San Francisco branch of the ancient Chinese organized crime syndicate known as the Triad, led by an undercover FBI agent who had infiltrated the group, evolved into a widening investigation accusing Yee of arranging an illegal arms trafficking deal with a Muslim rebel group in the Philippines in exchange for $100,000 funneled into his campaign, on top of smaller favors that Yee allegedly did in exchange for envelopes with $10,000 in cash.

It was even worse for local political consultant Keith Jackson, a key Yee fundraiser who was also on contract with Lennar Urban for its Bayview-Hunters Point development projects, with the undercover FBI agents allegedly drawing Jackson into big cocaine deals, money laundering, bribery, and even a murder-for-hire plot. If the complaint is to be believed, Jackson seemed willing to do just about anything to enrich himself and raise money for Yee.

Meanwhile, the public image that Chow has been cultivating for himself since his 2003 release from federal prison — that of a reformed career gangster turned Chinatown civic leader, someone praised by local politicians for inspiring fellow ex-convicts to turn their lives around — was replaced the complaint’s description of a powerful “Dragonhead” overseeing a vast criminal enterprise involved in drugs, guns, prostitution, protection rackets, moving stolen booze and cigarettes, and money laundering.

“I think the whole city is in shock at the moment,” Board of Supervisors President David Chiu, who represents Chinatown and ran against Yee in the 2011 mayor’s race, told the Guardian that afternoon. “Today’s widespread law enforcement actions are incredibly disturbing. The detail and scale of the criminal activities are shocking.”

In the days that followed, Yee withdrew his candidacy for Secretary of State and was suspended by his colleagues in the California Senate. But where this wild tale of crime and corruption goes next — and who else gets implicated as these powerful and well-connected defendants look to cut deals to avoid the lengthy prison sentences they all face — is anyone’s guess.

Chow, 54, was raised a criminal, telling the History Channel’s “Gangland” that he stabbed someone in Hong Kong at the age of nine before moving to San Francisco in 1977 and getting involved in the Hop Sing Boys gang and Chinatown’s criminal underworld.

He survived the Golden Dragon Massacre, a shooting between rival Chinatown gangs that left five dead, but he was arrested in 1978 for a robbery and sent to prison for the first time, released in 1985. The next year, he was sent back to prison for attempted murder and more gang mayhem, released in 1989.

“I did time with Charles Manson, a good friend of mine. Kimball, a serial killer. I did time with a bunch of amazing people. Each person you talk to you learn something from. Ain’t no stupid people inside the prison, you can say that,” Chow told Gangland.

Chow was arrested again in 1995 on a variety of racketeering and other criminal charges and sentenced to 25 years in prison. But he later testified against Chong and got his sentence reduced, and he was released from federal prison in 2003.

After his release, Chow publicly claimed to go legit, working on book and movie deals about his life, as well as building connections in the political world. Chow posed for photos with then-Mayor Gavin Newsom and other local political figures.

But the latest criminal complaint said that even as Chow pretended to be moving on, he continued to make incriminating statements to the undercover agents “confirming his knowledge of and involvement in criminal activity.”

The criminal complaint alleges that “Chow is currently the Dragonhead, or leader, of the San Francisco-based Chee Kung Tong organization,” which it described as a criminal syndicate connected to Hung Mun, a criminal dynasty that began in 17th century China, “also referred to as a Chinese secret society and the Chinese Freemasons.”

It says Chow was sworn in as CKT head in August 2006, soon after the still-unsolved murder of CKT head Allen Leung. Chow’s swearing-in was reported in local Chinese media sources, so SFPD and FBI conducted surveillance there and launched an investigation.

The FBI says it began infiltrating CKT five years ago, including an undercover FBI agent dubbed UCE 4599, who in May 2010 was introduced to Chow, who “then introduced UCE 4599 to many of the target subjects.” UCE 4599 told Chow he was a member of La Cosa Nostra, the Italian mob.

The gang members are accused of laundering money made from “illegal activities, specifically illegal gambling, bookmaking, sports betting, drugs, and outdoor marijuana grows.” They allegedly laundered $2.3 million between March 2011 and December 2013 for UCE 4599, with members collecting a 10 percent fee for doing so.

The complaint says Jackson “has a long-time relationship with Senator Yee,” and “has been involved in raising funds for” Yee’s run for mayor “and for Senator Yee’s current campaign in the California Secretary of State election.” And much of the complaint details deeds allegedly committed by Jackson and Yee.

In fact, the second person named in the complaint, right after Chow, is Yee, “aka California State Senator Leland Yee, aka Uncle Leland.”

Yee and Jackson met UCE 4599 through Chow, and then Jackson allegedly solicited him to make donations to Yee’s 2011 San Francisco mayoral campaign “in excess of the $500 individual donation limit. UCE 4599 declined to make any donations to Senator Yee, but introduced Keith Jackson and Senator Yee to a purported business associate, UCE 4773, another undercover FBI agent,” who made a $5,000 donation to Yee’s mayoral campaign.

Yee had $70,000 in debt after that mayor’s race and worked with Jackson on ways to pay off that debt. “This included soliciting UCE 4773 for additional donations and in the course of doing so, Senator Yee and Keith Jackson agreed that Senator Yee would perform certain official acts in exchange for donations from UCE 4773.”

Yee allegedly agreed to “make a telephone call to a manager with the California Department of Public Health in support of a contract under consideration with UCE 4773’s purported client, and would provide an official letter of support for the client, in exchange for a $10,000 donation.”

That included Yee issuing an “official state Senate proclamation honoring the CKT in exchange for a $6,800 campaign donation, the maximum individual donation allowed by law.” Yee allegedly did so, and it was presented by one of his staff members at the CKT anniversary celebration on March 29, 2013.

Yee and Jackson are also accused of introducing a donor to unidentified state legislators working on pending medical marijuana legislation, the donor being another undercover agent who claimed to be a medical marijuana businessman from Arizona looking to expand into California, “and in payment for that introduction, UCE 4180 delivered $11,000 cash to Senator Yee and Keith Jackson on June 22, 2013.”

“Jackson told UCE 4599 that Senator Yee, had a contact who deals in arms trafficking.” Jackson then allegedly requested UCE 4599 make another donation “to facilitate a meeting with the arms dealer with the intent of UCE 4599 to purportedly purchase a large number of weapons to be imported through the Port of Newark, New Jersey.”

That deal for up to $2.5 million in weapons involved automatic weapon and shoulder-fired missiles, the complaint said, and “Senator Yee discussed certain details of the specific types of weapons UCE 4599 was interested in buying and importing.”

The complaint says that Yee expressed discomfort with how openly UCE 4180 discussed overt “pay to play” links between cash donations and official actions. “I’m just trying to run for Secretary of State. I hope I don’t get indicted,” Yee allegedly told two undercover FBI agents during a walk on June 20, 2013, urging them to be less explicit about connecting official favor with campaign donations.

“Despite complaining about UCE 4180’s tendency to speak frankly and tie payment to performance, and threatening to cut off contact with UCE 4180, Senator Yee and Keith Jackson continued to deal with UCE 4180 and never walked away from quid pro quo requests make by UCE 4180,” the complaint said. “In fact, Senator Yee provided the introductions sought by UCE 4180 and accepted cash payments which UCE 4180 expressly tied to the making of the introductions.”

Yee’s attorney, Paul DeMeester, told reporters they will contest the charges: “We will always in every case enter not guilty pleas, then the case takes on a life of its own.”