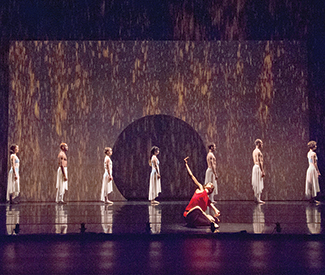 DANCE Looking at ODC/Dance choreographers Brenda Way and KT Nelson’s first evening-length collaboration, boulders and bones, proved to be both fascinating and frustrating. Fascinating, because the work beautifully addressed a question probably going back to when we first took a chisel to a rock and stamped a dancing circle into the ground. In order to create, apparently, you must disturb nature’s order; you break down what’s there to make room for what will be. Frustrating, because boulders’ balancing act between visuals, music, and dance didn’t push the work far enough beyond the inspiration provided by RJ Muna’s documentary about the making of Andy Goldsworthy’s stunning Culvert Cairn.

boulders opens with Muna’s time-lapse film, which follows Goldsworthy tearing up the earth, rearranging it, and ending with an exquisitely embedded sculpture. Muna is a gifted photographer but the rhythm he imposed on the visuals felt unmusical and top-heavy. I almost wish that the choreographers had not shown the film, since it put an underpinning of narrative implications on the dance’s structure that at times felt restrictive. boulders is also an hour long, probably not a time frame Way and Nelson are all that comfortable with yet.

Still, despite some plodding moments, boulders soars when it finds its own voice, starting with the transition from the film to the stage. We find Music (Zoë Keating and her magic cello) and Dance (Anne Zivolich at her most evanescent) in Alexander Nichols’ black-hole set that emerged from Goldsworthy’s Culvert.

Each of the women gets a major solo. Having been moved downstage right, Keating displays playing that blooms into exquisite, melodic raptures that are about as rhythmically dancey as anything I have heard of hers. Zivolich, caught in a large spotlight — a mirror image of Nichols’ hole against a soft landscape — seems like a spirit trying to find a place to alight. The intensity of her searching, flipping, flying almost looked like a duet with that blackness. It’s a long, risky solo, performed in silence but Zivolich was free like the wind and twitchy as a nervous wreck. She pulled on all of her considerable technical and emotional resources to bring off a remarkable tour de force.

Despite the fact that Way and Nelson have different creative sensibilities, for boulders they have found a common language, in which individuals often disappear in pileups, and rolls on the floor or small units coalesce into larger ones only to explode. Balances are fragile except when Maggie Stack freezes in the middle of a run and has to be released, or Natasha Adorlee Johnson throws herself against Jeremy Smith and just about knocks him over.

Much of the choreography consists of small unison duets that suggest a sense of order that is constantly undermined. The dancers line up until somebody squeezes into a space between, or Yayoi Kambara nonchalantly squeezes their proper straight line into a muddle. People drag themselves, or crawl close to the ground. They end between each other’s legs or flat on their back hoisting a partner overhead. They are pushed like brooms or swung in whipping circles. Some of the maneuvers suggest animal, or at least non-biped, behavior.

Zivolich and Kambara’s duet emphasizes their different personalities, with Kambara towering over the petite Zivolich, though without a note of rancor. Zivolich and Dennis Adam again and again meet up as if getting to know each other. He swings her overhead like a helicopter propeller; she precariously leans against his lower arm, and in the end he sprinkles her with some red dust and caresses her cheek.

In its third part, boulders radically changes gears. With the dancers dressed in white gossamer garments, and the women in spring-green bodices, they look like celebrants, perhaps of some ancient rite. They again line up; this time with feet that deliver unison staccato stomps, but arms that fly all over. Then they spread in easily flowing sequences that stream out of that black hole like water. It’s a celebration of new life, perhaps love, certainly the power of dance.

boulders is an honorable tribute to Goldsworthy — but ultimately it’s no competition to the force, resonance, and weightiness of what looked like a teardrop quarried out of the earth.

boulders and bones will be shown again in ODC’s program A (Wed/26, Fri/28, and Sun/30). Program B (Thu/27 and Sat/29) includes Kimi Okada’s delightful Two If By Sea; Way’s dystopic Unintended Consequences: A Meditation, set to Laurie Anderson; and the exuberant Triangulating Euclid, choreographed by Way, Nelson, and Kate Weare. *