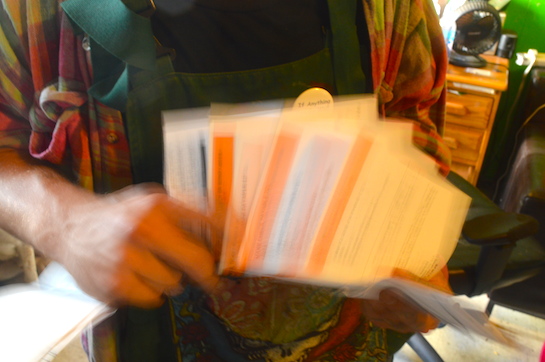 Police have heavily increased sweeps of homeless campers in Golden Gate and Buena Vista parks since January as city officials discuss the next 10-year homeless plan, targeting a specific population of the city’s homeless: youth 25 years old and under, kids who often make those parks their homes.

Officials estimate there are as many as 1,902 homeless unaccompanied children and transitional age youth (ages 18-24) in San Francisco. The Haight’s young homeless often identify themselves colloquially as “street kids.” Although not all street kids desire to stop roaming, those striving to stabilize their lives find camping citations a major barrier in escaping homelessness.

“There’s been a big step up in police force in the Haight,” Jefferson Fellows, a manager of outreach at Larkin Street Youth Services, told us. On the early morning of Jan. 24, Park Station police officers cited over 30 campers in Buena Vista and Golden Gate parks, according to police records. The numbers are higher than usual, but month-by-month comparisons are difficult due to the seasonal changes in homeless populations.

At its satellite office, Fellows works with Haight street youth to reduce their citations and maintain court dates. “There’s a real struggle our youth are facing, and a lack of options,” he said.

The youth and police both verify that enforcement has increased lately.

Capt. Greg Corrales of Park Station told the Guardian he’s increased sweeps of campers in the two parks in response to increased community complaints. When we asked him to produce email copies of those complaints, he said many of them were made in person at community meetings.

A recently formed petition, “Restore and Improve Buena Vista Park,” specifically calls on local police to step up patrols, increase enforcement of no camping laws, and to place police at key points around Buena Vista Park at 5pm to prevent campers from setting up in the evening. It has 748 signatures.

The neighbors view increased police action as the solution to dissolving campsites, but the citations issued to those campers can be a barrier for these youth to find permanent housing.

Walking into Larkin Street Youth’s satellite office on Haight Street is akin to stumbling into a Thanksgiving dinner. Teenagers and 20-somethings gather around a table brimming with food: strawberries, pastries, cheese, and more. Many know each other, and rejoice in their reunions after spending months apart on the road. As we walked in, a girl named Stormy shouted “Ace!” happily and wrapped her arms around a dreadlocked friend.

They may or may not have homes, but it’s clear many consider each other family. Among their many common bonds (a love of dogs is a popular one), they all have one thing in common they don’t celebrate: an abundance of citations for sleeping or camping in parks.

One of them is Skye David Chase, 23, a tan and bearded native San Franciscan. He has “blood family” out in the Presidio. “My mom was a black sheep, she hung out with the hippies and the Deadheads down here (in the Haight),” he said. “My soul is here.”

Chase pulled out a stack of citations an inch thick. They’re mostly from camping in Golden Gate Park, but other citations are peppered in as well, he said. Altogether they tally about $2,000.

“Now I have a lot of fines built up, I might have jail time, I don’t know. That’s just for four months of sleeping here,” he said. “In that time, I was coming [to Larkin] for services, I was going to counseling, getting my medical stuff. The cops would show me respect, shake my hand sometimes, but they’d still give me the ticket.”

Not all street kids want out, but Chase is tired of roaming. He says he kicked his heroin habit, and now spends his time educating himself in libraries and looking for a steady job. He dreams of becoming a librarian.

Most importantly, he’s seeking a permanent place to call home. But he’s in a hole he can’t dig out of: if he doesn’t find housing he’ll keep accruing camping citations, and finding housing is difficult as long as the citations burden him financially. Applying for certain types of housing can be difficult with the specter of criminal history hovering over you.

“Many programs turn people away who have warrants,” Jennifer Friedenbach, the executive director of the Coalition on Homelessness said. As citations go unpaid, youth are issued arrest warrants. And although some programs work to clear records of offenders, like the Public Defender’s Office’s Clean Slate program, camping violations are often infractions — Clean Slate advertises helping offenders reduce felonies to misdemeanors.

A San Francisco Civil Grand Jury report last year put the problem succinctly: “The current system of issuing citations for nighttime sleeping and camping in the Park has not been effective in reducing the number of park dwellers.”

Bevan Dufty, the director of the mayor’s homeless program, HOPE, said he understands the need to enforce the law, but that perhaps that enforcement is detrimental to permanent housing solutions.

“Citations more often than not result in a barrier to housing people,” he said. But camping citations are just one of many types of citations harrying the homeless, he said. Dufty told us of a young woman who is now 23, but has been homeless since she was 15. He went with her to court to try to minimize her many citations, which made her ineligible for some services.

“The fundamental goal,” he said, “should be trying to get people housed.”

Dufty said he would try to help Chase personally, and we’re now in efforts to connect them.

Chase may have many fines built up, but a pro bono attorney he met through Project Homeless Connect is helping him navigate the legal system. Recently, his effort to find housing and get a job have taken on a dangerous edge of necessity. Chase recently learned he is HIV-positive.

“I just found out six months ago,” he said. It’s forced him to make decisions about where to camp, based on his energy levels and proximity to services. “If I walk too much I’m not utilizing my food and energy properly.”

Many of the street kids are roamers, but for those like Chase who want to find permanency and stability, it can almost seem like the city is giving them a help up with one hand and pushing them back out onto the street with another.

But Chase maintains positivity about life.

“I was here a few months ago and someone had a telescope out here, we could see the nine moons of Jupiter lined up. It was powerful,” Chase said. “I have an empathetic viewpoint now that I’ve been through all this. I don’t have a choice.”