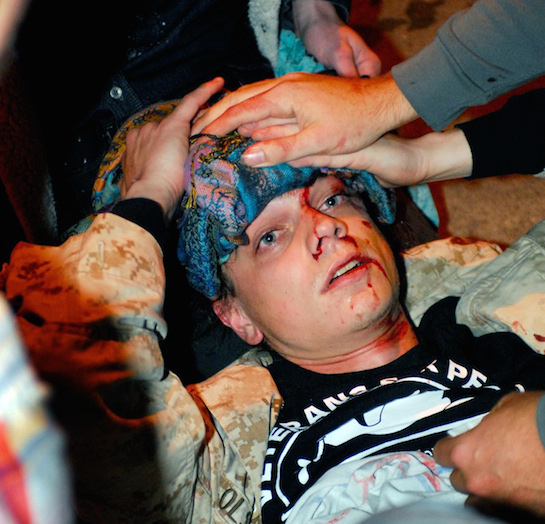 Iraq war veteran and injured Occupy Oakland protester Scott Olsen, 26, won a settlement of $4.5 million from the city of Oakland in a federal lawsuit, his attorneys announced today.

At the tail end of a thousands strong 2011 Occupy Oakland protest, an Oakland Police Department officer fired a beanbag directly into Olsen’s head, causing serious and lasting brain injury. His attorney, Rachel Lederman, said that was why the payout was so high.

“His bones were shattered, part of his brain was destroyed,” she told the Guardian. “He’d been working as a computer system network administrator. He’s not going back to that kind of work, and it compensates him for his wage loss for his lifetime.”

But in the end, she said, “No amount of money can put his head back together.”

Video of the Occupy Oakland protest in 2011, including video shortly after Olsen was injured.

The “beanbag” is more accurately described as a flexible baton round, a press release from the Oakland City Attorney’s office wrote. A flexible baton is a cloth-enclosed, lead-filled round fired from a shotgun.

“We want to hold the police department accountable so we can hopefully prevent police brutality in the future,” he said, speaking slowly.

Olsen is not the OPD’s only worry. OPD is currently under federal oversight over its questionable actions in incidents like the Riders case, and the mishandling of the Occupy protests. As then-Guardian reporter Yael Chanoff reported in 2012, the OPD’s own Incident Statistics document the extensive use of force the night Scott Olsen was injured.

Ultimately the City of Oakland will pay only $1.5 million of the $4.5 million settlement, city spokesperson Alex Katz wrote in a press release. The city’s insurance will pay the rest.

City Attorney Barbara Parker said the payout was about justice, but is also about saving Oakland money in the long run.

“This settlement will save the City the far greater costs of a trial and potentially much higher judgment,” she said. “This is a fair settlement given the facts of the case and the significant injuries Mr. Olsen sustained.”