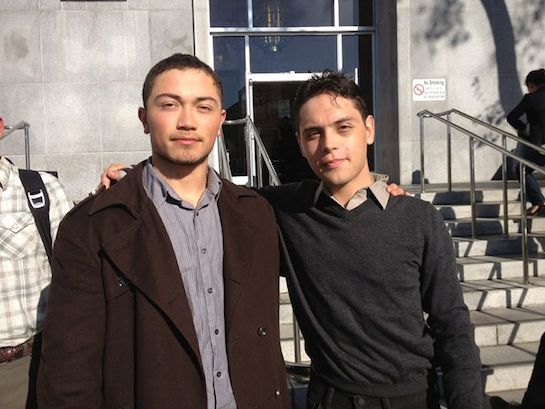 The two formerly jailed City College student protesters can now breathe a sigh of relief, as this morning they learned that the District Attorney’s Office won’t be filing criminal charges against them.

Otto Pippenger, 20, and Dimitrios Philliou, 21, were detained by SFPD following a violent clash during a City College protest last Thursday. Their ideological and physical fight for democracy at their school is also the subject of one of our print articles in this week’s Guardian. Philliou’s attorney confirmed to the Guardian that charges were not pursued by the District Attorney’s Office.

“The charges have been dropped for now, in terms of the criminal case,” said Rachel Lederman, president of the San Francisco chapter of the National Lawyers Guild, which is representing Philliou.

But, she noted, they’re not out of the fire yet.

“The fight is not over for them,” she said, “as it’s possible they’ll face school discipline.”

Heidi Alletzhauser, Pippenger’s mother, told the Guardian that Vice Chancellor Faye Naples indicated the two would face some sort of disciplinary hearing, though Naples told Alletzhauser that Pippenger would not be expelled.

We called Napes to confirm, but did not hear back from her, and we’ll update this post if and when we do.

Alletzhauser was concerned that the Chancellor Arthur Q. Tyler publicly pointed a finger at the two boys, shaming them for their actions in a letter he penned to the community and to the press. “I am saddened to see students engaging in violent outbursts,” he wrote. The letter as a whole seems to cast a shadow of blame on the protesters.

“It sounded to me like they were sure Otto and Dimitrios were guilty,” Alletzhauser said.

The school hearing has not yet been confirmed. Alletzhauser was happy to see her son and Dimitrios get back to school.

“They both had classes at 10, so they went to school,” she said. “Which is adorable, I think.”