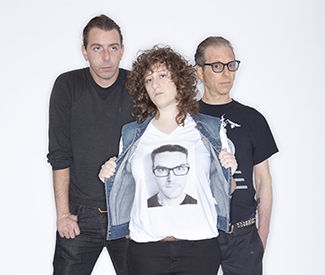 The first time I saw Annie Girl & the Flight play, I started thinking about what it is, exactly, that makes a frontwoman: Annie Girl’s voice is a disaffected sing-song (Mazzy Star meets Kathleen Hanna?) that belies a dark, jagged well of feeling at the heart of the music; that’s surely front and center, layered over bandmate Josh Pollock’s slow-building wall of guitar. But it’s her absolute lack of showiness, her refusal to be anything other than exactly what she is, and her tendency to attract the entire room’s focus and energy not in spite of but because of that quality that makes her someone to watch: She has all the specific makings of a star who doesn’t seem to give a shit that she’s a star.

A Colorado native, Annie moved to the Bay Area three years ago, at age 17, on something of a whim: “I’d been attending community college, getting ready to transfer to the state school, when the dean accidentally gave me the wrong date for the application deadline,” she says. “I missed it by a day, took that as a sign, and bought a one-way ticket to San Francisco.”

Having grown up playing in Denver punk bands, she found that Northern California brought out a different sound in her songwriting — what she now calls the band’s mix of “super slow, hypnotic folk and loud, trance-inducing, art-rock.”

Add in supporting players who are veteran musicians — Pollock’s played with psych-rock giants like Gong as well as SF bands like Foxtails Brigade and the one and only Bobb Saggeth; bassist Joe Lewis is a regular on the local folk circuit (Rupa and the April Fishes, Kacey Johansing, Fpodbod), drummer Nick Ott also plays with Emily Jane White and Vanish — and the result is magnetic. Their recently released single “Betray the Sea” is the first off their new EP, Pilot Electric, which they’ll debut May 2 at The Chapel.

Best and worst thing about being a musician in the Bay Area?

Josh: The best thing is that it’s the Bay Area, which seems to be one of the better places to live on this Earth. Also, if you want to do something artistically, you can do just do it — you don’t need a Kickstarter campaign, or a board of directors, or investors, you can just do it. Maybe no one will care, but you don’t have to wait around for some higher power to give you the keys to the kingdom. The worst thing is that everyone knows this, so everyone wants to live here, so it’s laceratingly expensive.

Most underrated local act (other than you)?

Nick: Most underrated local act is probably Bronze. They are the best psychedelic art rock band since Silver Apples.

Annie: Ash Reiter, Everyone is Dirty, Li Xi, Yesway, FpodBpod, Lee Gallagher & The Hallelujah, Sugar Candy Mountain, Kelly McFarling, Michael Musika. The Bay Area is overflowing with incredible music, all you have to do is go out and find it.