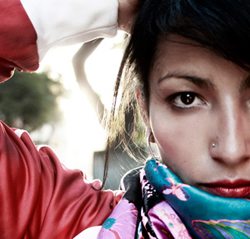 If you’re tired of mainstream Latin hip-hop — which, right now, is disproportionately made up of reggaeton beats, male MCs, and bitter lyrics — then Ana Tijoux is the lady rapper for you.

The French-Chilean artist upends the genre. Instead of bragging about her millions, she advocates for cultural pride. Instead of barking at her enemies, she weaves a soothing spool of words that remixes the Spanish language into silk. She has evolved from using samples to working with a live band in a textured, colorful sound all its own, incorporating brass, jazz inflections, and a smorgasbord of South American instruments such as Andean charangos and pan-flutes.

You might have heard Tijoux’s origin-story track, “1977,” on Breaking Bad, as Jesse and Mike make deliveries through a desolate Southwestern landscape. The song describes the year she was born in France to parents who were exiled during the military dictatorship in Chile. Her alternating flow and staccato make the mind-numbing road trip seem badass. Following that sophomore record, La Bala, Tijoux is releasing a mature album with lush orchestration March 18: Vengo. The following evening, Wed/19, she’ll hit The Independent.

Calling to mind Erykah Badu, Tijoux is a poet with a low, creamy voice and a call for algre rebelde, or joyful rebellion. Her lyrics will make you feel like the top of your head was taken off, to paraphrase Emily Dickinson. “I come as a child who sought entrance to his/ home, the entrance to his origin, the return to/ his crusade, I come seeking silenced history/ the history of a land pillaged/ I come with the world and I come with the birds,” Tijoux raps in the title track of Vengo. In the shadow of Pinochet’s Chile, Tijoux is rebuilding dignity in her heritage with thoughtful, joyous rap.

Ahead of her show Wednesday night, we caught up with her by phone to talk about why it’s better to protest with beauty, how it felt to move from France to Chile as a teenager, and what it was like to dance with a man in an octopus suit in a music video.

San Francisco Bay Guardian How did you start rapping, and what female rappers influenced you?

Ana Tijoux I think I began when I was 20, very naturally, out of necessity because I needed to communicate. The woman who inspired me first was Bahamadia. And then I began to rhyme and write, and then I began to learn about more female MCs: MC Lyte, and when I was younger, Queen Latifah.

SFBG I’ve read that you consider yourself to be shy. How do you find the strength to perform in front of so many audiences?

AT Because I’m an amazing actress. [Laughs] On stage, I’m singing, I’m communicating, so I forget about the audience. It’s energy, and you begin a dialogue with people. That’s one of the moments when I feel free. It doesn’t matter what happens, I just do it.

AT Because my parents were exiled in France, and I’m from there, and when refugees could come back I came with my parents. It was hard, very hard. I was a teenager and you’re in the construction of a personality. You’re fighting between a child and an adult in one personality, and then to change continents was hard. It was also one of the most amazing moments in my life. And it was a moment of a lot of lessons, but I understood about them more later, not immediately. I understood about friends, and about how the North robs so many things from the South. It was a political education.

SFBG Your 2007 video for “Eres Para Mi” with Julieta Venegas is goofy and delightful. It looks like you had a lot of fun making it. What was it like dancing with a man in an octopus suit and a nun?

AT The most hilarious moment in my life. When she made the video she didn’t tell me an octopus would be there, so it was a surprise. And I’m shy, like I told you, so I tried to act the best that I could. I didn’t know I would have an octopus near to me.

SFBG How did you write an album with your young children around?

AT It was an amazing moment, but very hard with time. I learned so much, like trying to be a mother with the [artistic] creation and no sleeping. At the same time, it was amazing. I learned time is a precious treasure and so valuable. I can’t lose time anymore in stupidity. The time I have is for creation or friends and family. It was hard to be honest, but really amazing.

SFBG Why did you decide to work with a live band instead of using samples?

AT I work with the best musicians I could have imagined. The songs have different vision with drums because it can be longer, or if the bassist has a solo, each instrument sings and gives a different color. It feels so organic and every instrument can give one texture to a song, and different movement and weather in the songs.

SFBG In “Vengo,” you say “Without fear you and I decolonize/what we were taught.” How have you unlearned what you were taught about Chile’s history?

AT I feel like everything I learned in school was with a colonized vision. You become interested in your roots, you understand that how you learned history is so different than what happened. In Chile, we live in a country with people with brown and black hair, and in publicity they have women with blond hair. All this publicity is about who we should be, and I’m saying we should be proud of who we are as a society and a community.

In America, they say it’s been 500 years since they discovered the continent. They didn’t discover it, people were here before the colonizers arrived. We’re changing the vision and vocabulary.

SFBG I loved Somos Sur, and I think your lyric “alegre rebeldía” captures the spirit of your music. In your calls for social justice, I sense more beauty than anger. What inspires you to call for equality with your gorgeous lyrics instead of just shouting at a protest?

AT Protests in general are protests for life. When you see fights around the world, it’s a fight for life. To have a fair life, it’s about dignity. We’re so used to protests with anger. We want a better future for us our kids and community. So that’s what I’m saying, it’s a fight for happiness.

AT Funny. I’m glad. It’s an amazing series, and I’m glad that there is a mainstream series that’s taking a risk. It’s a good series with amazing characters.

SFBG In “1977,” you say “Caminas en crucijadas/ Cada cual es su morada” (“You walk in crossroads/ each one is your home”). Where do you consider your home now?

AT Chile, totally Chile. It’s where my family is, my parents, my kids, my garden, and my refugees.

SFBG What advice would you give to young female rappers out there?