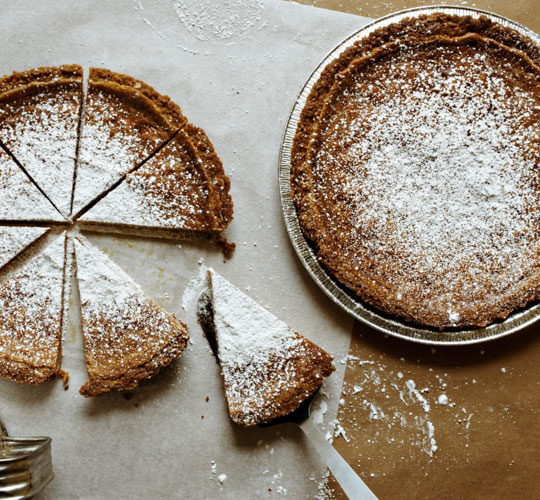 Some of these pies on offer are pretty famous, and no I’m not going to make a Piethagorus joke here. Nerd! (Just Euclidding.)

Full crumbly-crusted release, with mouthwatering pieday rundown, after the jump.

To celebrate the day’s mathematical roots, all slices will be sold for $3.14, and will come with one drink ticket redeemable for a complementary craft cocktail paired specifically to the chosen slice (limited to one drink per person, though multiple pie slices may be purchased). The pop-up begins at 3:14pm and ends at 7pm, or when supply runs out. In addition, Goldbely.com will also be running a day-long promotion: for every whole pie purchased online, customers will have the option to ship a second to a friend for $3.14.

The pies on offer include such highlights as: Momofuku Milk Bar’s “Crack Pie” (New York, NY) A deceptively simple concoction that features common pantry items, like vanilla and cream, in a delicious oat cookie crust for a rich and buttery experience that’s as addictive as its name suggests. Twedes Cafe’s “Twin Peaks Cherry Pie” (North Bend, WA) The pie that ABC’s “Twin Peaks” made famous. Its delicate and flakey crust holds a warm and jammy filling of Washington-sourced sweet cherries. As Special Agent Dale Cooper would say, it’s “one damn good cherry pie.” Mike’s Pies’ “Killer Key Lime Pie” (Tampa, FL) A true key lime pie from the Sunshine State. This four-time National Pie Championship winner has earned its place as one of the best, with a crunchy graham cracker crust and a tart, custard-smooth filling flavored with juice from Florida key limes.

Goldbely pops up for PI Day