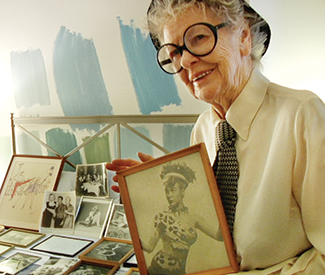 FILM The last time Elaine Stritch was in San Francisco was in 2003, at the Curran Theatre, for the Tony Award–winning Elaine Stritch: At Liberty. Then in her mid-70s, the legendary actress and singer appeared on a bare stage in her trademark suggestion of an outfit — black stockings and an oversized dress shirt — for a revealing, song-studded solo confessional about love, ambition, alcoholism, and the jumble of a career in a theatrical golden age. It was an irresistible look back at (and behind) a brilliant and rocky Broadway (as well as film and television) career that began in 1946, and continues.

Stritch advances and expands the conversation started in At Liberty with her latest appearance, onscreen in director and producer Chiemi Karasawa’s 80-minute portrait, Elaine Stritch: Shoot Me. Arguably still more fascinating and frank in her mid-80s, Stritch proves once again an undeniable presence — uncensored, irascible, charming, and witty — but it’s all now balanced with a more pronounced vulnerability, captured in disarmingly honest moments of reflection, struggle, and even crisis.

Made over the course of two years of intimate observation, the film chronicles Stritch as she prepares for a number of returns. One is to the stage, to sing Stephen Sondheim again, the composer with whom she is indelibly identified thanks, in no small part, to her original interpretation of Joanne and “The Ladies Who Lunch” in 1970’s Broadway smash Company. Rehearsing with longtime musical director, accompanist, and friend Rob Bowman (a stalwart presence here), Stritch, then on the cusp of her 87th birthday, becomes a study in perseverance and hard-won skill in the face of an aging body menaced by diabetes.

“It’s hard enough to remember Sondheim’s lyrics when you don’t have diabetes,” notes Stritch. “But everybody’s got a sack of rocks, as my husband [John Bay] used to say.”

En route to a gig in East Hampton, Stritch shows she’s not above playing up the senior citizen at times: When a siren hoots at her limo (illegally parked in the fire zone outside a Starbucks), Stritch, a large blended beverage in her hand, doesn’t miss a beat. “Oh, it’s the cops. I’ll limp,” she decides, successfully deflecting the local fuzz.

But the next morning, Bowman breaks the news that the gig has been canceled owing to the threat of a hurricane off the coast of Long Island. Still in bed and feeling less than 100 percent, the star is elated. A short time later, she spirals into a diabetes-induced breakdown, plagued by mental confusion and fear, eventually losing her capacity to speak coherently as an ambulance arrives to rush her to the hospital. It’s a harrowing scene, but its unabashed honesty is part of what makes the documentary more than the usual star bio.

At the same time, the film records another return for Stritch, as she makes the momentous decision to leave her Upper East Side home to relocate back to Michigan, where she grew up in the 1930s, the youngest of three daughters in a well-to-do Irish-Welsh family of devout Catholics headed by an executive at B.F. Goodrich. It had been some 65 years since the bold but wholly innocent young Stritch, fleeing the safe but stultifying confines of her childhood home, arrived to conquer the Big Apple, cutting her teeth in Erwin Piscator’s Drama Workshop at the New School alongside such classmates as Marlon Brando (Stritch offered up details of the steamy relationship there in At Liberty).

The years spent shooting the life of a living legend, an elderly yet very active one with a well-earned reputation for being difficult, could not have been a walk in the park. Shoot Me (whose playful title might be thought to run in two directions at once) makes a virtue of that at times, no doubt, exasperating bargain. Stritch says she had to think about it before accepting the project.

“I wasn’t crazy about the idea,” she admitted in a recent phone conversation while she was on a promotional swing through New York. “I was a little skeptical, and afraid of being bored. But I wasn’t bored for a minute.”

And the camera, there every step of the way, seems for its part thoroughly mesmerized and intrepid. Stritch, after all, is not above directing the show herself. “I think you should be watching me unpack the muffins,” she insists at one point, turning a desultory scene of domestic routine into a just slightly uncomfortable confrontation with a conciliatory cameraman. At other times, the camera is her confessor, as when, from a hospital bed, she relates her mixed emotions and convictions about meeting the inevitable end of life.

“Your tendency might be, if you didn’t know her, to disregard how vulnerable she is, and how deep her insecurities are,” says Hal Prince, whose storied accomplishments on Broadway include producing and directing Company. One of several impressive interviews of Stritch friends and colleagues, Prince here sounds a note that echoes throughout an untidy but deeply personal, touching but rousing documentary profile: “She’s complicated and she’s an eccentric. But you’ve got to deal with Elaine’s eccentricities because, ultimately, they’re worth it.” *