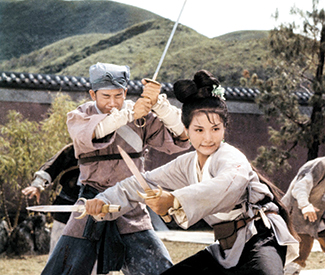 CAAMFEST Prolific producer Sir Run Run Shaw, an iconic figure for kung fu movie fans, died Jan. 7 at age 106 after an epic career in cinema. (Amazingly, he did not retire until 2011.) CAAMFest screens a trio of films in tribute: Li Han-hsiang’s musical The Kingdom and the Beauty (1959); King Hu’s Come Drink With Me (1966), a major influence on Ang Lee’s 2000 Crouching Tiger, Hidden Dragon — both feature lethal leading lady Cheng Pei-pei; and Chang-hwa Chung’s cult classic 1972 King Boxer (Five Fingers of Death), which one assumes Quentin Tarantino can recite in his sleep. (You only have to get as far as the title sequence to hear music he used to memorable effect in the Kill Bill films.)

I caught up with the HK-based Garcia by email to ask him a few more questions about the late, great Sir Run Run Shaw.

SF Bay Guardian The Shaw Brothers had an enormous filmography. What stands out about the three films in CAAMFest’s tribute?

Roger Garcia The films reflect some of the characteristics of Shaw Brothers Studio’s output at the time, when Mandarin language production dominated the HK film scene. Li Han-hsiang’s King and the Beauty is exemplary of the “quality” costume picture and Huangmei opera films of the time. It also features the great director King Hu in it — he was Li’s protégé. [He directed] Come Drink With Me, generally regarded as a groundbreaking martial arts film with its innovative staging. The film made a star of Cheng Pei-pei. She had previously featured in some Shaw Bros musicals and was a dancer originally. King Boxer is interesting because it was made by one of the best Korean action filmmakers, Chang-hwa Chung. It was a characteristic of the Shaw Brothers to bring in directors from other Asian countries to basically remake some of their native hits. [Another example] is Umetsugu Inoue, who specialized in remaking his hit Japanese musicals into Mandarin Shaw Brothers movies.

SFBG What other Shaw Brothers films do you recommend?

RG The most interesting are the films by Lau Kar-leung, especially Executioners From Shaolin (1977) and Dirty Ho (1979), which are masterpieces of the genre. 36th Chamber of Shaolin (1978) is also popular and an enjoyable film.

Other works are the coded lesbian and gay films, especially 1972’s Intimate Confessions of a Chinese Courtesan, which is a staggering work about lesbian love and intrigue by Chu Yuan. It is a pinnacle of gay cinema. I also find the camp aspect of Chang Cheh’s The Singing Thief (1969) quite charming.

SFBG What is Shaw’s lasting legacy?

RG I think in terms of film — because we must not forget he created TVB, the major Chinese TV corporation, and was also a major philanthropist in the last years of his life — he brought Chinese cinema to the post-war world. He also had a vision of pan-Asian cinema with distribution and production around the region that we are perhaps only catching up with now! *