Home Burning the Man? Well, not exactly, at least not yet 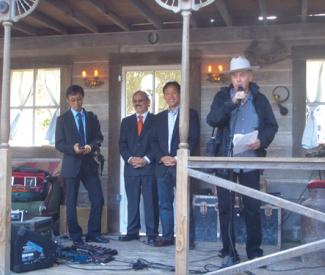 Last week’s announcement that Burning Man has become a non-profit organization got lots of uncritical coverage from the San Francisco Chronicle and other local news outlets, but the reality is the old owners are still firmly in control, as the Bay Guardian and the scrappy Burners.Me blog have been reporting.

It is true that The Burning Man Project, a nonprofit organization that founder Larry Harvey announced the creation of three years ago, is up and running and ostensibly in charge of “global cultivation of art and community,” as it put it in a March 3 blog announcement, whatever that really means.

But Black Rock City LLC continues to run the Burning Man event and control its vast revenue stream, even though it’s ostensibly been placed under the auspices and ownership of the new nonprofit, whose Board of Directors is still appointed to one-year terms by the old LLC board, which has permanent seats on the nonprofit board.

And any community accountability in that ownership arrangment is further undermined by the creation in 2010 of the ironically named Decommodification LLC, which owns the commodity that is Burning Man — its trademarks, brands, logos, etc. —  that the old LLC and the new nonprofit pays to license each year. It’s a similar setup to the old Paper Man LLC, a controversial arrangement that triggered internal lawsuits and set Burning Man down the path toward nonprofit control.

Kudos to the work of Burners.Me, which has continued critical coverage of an issue that I started covering while working on my book, The Tribes of Burning Man, but which I frankly lost the stomach to continue this watchdog role after concluding that most burners just don’t care who’s in charge or how much they make as long as the party doesn’t stop.

Although the authority and community control of the new nonprofit may not be exactly as Harvey made it sound three years ago, his timeline is still holding fairly true: three years later, the LLC is now under the umbrella of a nonprofit, and three years from now, the LLC board members will vote on giving up control over the brands.

But Harvey is still voicing skeptisim about giving up control to the nonprofit, responding to critics of the latest move by writing, “The reason for this 3-year interval is that even we do not invest blind faith in the new non-profit’s workings, and we want to be perfectly sure that it can be relied upon, in the face of temptations that arise within any organization when dealing with power or money, to pursue the policies that we have practiced.”

How have Harvey and those around responded to these same temptations in recent years? Well, we don’t know, because they are refusing to say how much money they transferred to themselves in salaries and lump sum payments (which Harvey had frankly said three years ago they would be taking, and well in excess of the $20,000 cap that was created during an earlier controversy to limit their accumulation of equity in an event created by attendees) before placing the LLC under the nonprofit umbrella.

But Harvey did respond to critics by saying that the LLC’s finances will indeed to be opened up for public inspection for the first time later this year when the new nonprofit files its financial paperwork with the state.

“It has been asked if we intend to reveal the financial records of Black Rock City LLC. The answer is yes; that too will happen at about the same time as the Burning Man Project reveals its information—these two entities will then become a clean well-lighted suite of rooms thrown open for inspection,” Harvey wrote. “But I cannot guaranty [sic] that even this amount of disclosure will satisfy everyone. Even then, I suppose that some will look for skeletons in closets, or search for sliding walls that might conceal a dungeon.”

So I suppose that we’ll all just need to wait-and-see. And in the meantime, I’m still waiting for a call back from Marian Goodell, a Burning Man spokesperson and member of the LLC board, to address our questions, and I’ll update this post if I when I hear back.

UPDATE: Goodell confirmed our basic understanding of this transition, confirming that the transparency in the LLC’s finances and thepayouts its six board members received won’t be disclosed to the public. “There’s no need to go back, everything is going forward from January 2014,” she said in response to our question about fiscal transparency after telling us, “At the end of 2014, the financials for the 501(c)3 are revealed, and any attaching subsidiary finances.”

That means BRC LLC, but not Decommodification LLC, which is not a subsidiary to the nonprofit. Goodell said the decision hasn’t yet been made how much to pay in licensing fees, although the nonprofit has an exclusive licensing arrangement “and can set the amounts for others to use it,” such as the network on regional events that Burning Man has spawned.

As for the general concerns about who controls Burning Man, she said, “There’s never been any intention to give full control to the community.” But she said that she and the other five board members have been responsible stewards of the culture and “I’m personally very invested in the success of it. My duty is to see this into its next iteration when the founders aren’t necessary to be making the big decisions.”