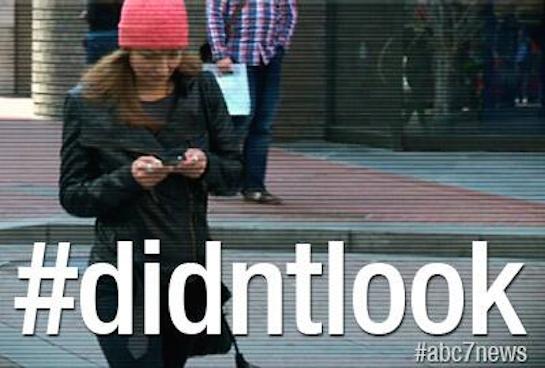 Streetsblog SF and others in San Francisco said the report engaged in “victim blaming.”

ABC7’s pedestrian safety coverage comes on the heels of a number of high-profile traffic collision deaths, including that of 6-year-old Sofia Liu, killed on New Year’s Eve. Since then, the Walk First program to create safer streets has garnered more attention, culminating in Mayor Ed Lee’s announcement today to partially fund safety improvements to the city’s most dangerous intersections, to the tune of $17 million — improvements that languished due to funding gaps since the program was announced in April.

But making all the needed improvements though would cost $240 million, according to city estimates, and that funding has yet to be identified. Suffice to say, the traffic enforcement debate still rages in San Francisco, with emphasis on the word ‘rage.’

“We’ve seen ‘blame the pedestrians’ from police and in the media,” Leah Shahum, executive director of the San Francisco Bike Coalition, said at a pedestrian safety hearing in January. Police Chief Greg Suhr that night apologized for his officers’ lax enforcement of drivers, and focus on pedestrians, and pledged to change policies to focus on drivers going forward.

“In San Francisco, simply stepping off the curb can be deadly,” ABC reporter Dan Noyes narrates in their video report. The word ‘deadly’ is capped off with a Hollywood-style musical flourish, like a horror movie moments before the big scare.

“Pedestrians are making mistakes over and over again,” Noyes narrates. The video cuts to pedestrian after pedestrian looking at cell phones, jaywalking, or otherwise engaging in unsafe behavior. It’s fair to say the piece, headlined “I-Team investigates what’s causing pedestrian deaths,” places responsibility of pedestrian safety squarely on the shoulders of pedestrians.

In the report, Noyes stops many pedestrians and calls them out for looking at cell phones — but doesn’t attempt to stop a single driver to do the same. Exacerbating the approach, the I-Team asked for San Franciscans to call out unsafe behavior via Twitter with the hashtag #DidntLook, which was emblazoned over the image of a pedestrian crossing the street.

That may have been what sparked the reaction that followed.

“Should peds look so that last memory is the car who killed them? What should peds do when facing pending death, push a car away?” Kate McCarthy, president of Walk SF, wrote via Twitter.

Beyond the pedestrian advocates and Twitter users, StreetsBlog SF’s Aaron Bialick was probably the harshest critic of the piece.

“Noyes didn’t let facts get in the way of producing a pedestrian-shaming piece,” he wrote. “ABC did put some of those pesky facts in the segment, like the SFPD statistics that two-thirds of pedestrian crashes are primarily the fault of the driver. But why should the I-Team’s ‘investigation’ allow rigorous data to spoil the slant of the segment?”

“Noyes is capable of better stuff,” he wrote.

The Guardian spoke with KGO-TV/ABC7 Vice President of News Tracey Watkowski, who defended the piece.

“Our goal for the story is to raise awareness for safety overall in San Francisco,” she said. “It’s all about everyone sharing the road. We’ve done a lot of stories on drivers, and we stand by this story.”

Chief Suhr addresses pedestrian safety after a hearing in January.

When we told Watkowsi that the story seemed to echo the anti-pedestrian slant that Chief Suhr had just apologized for, and that the police (and mayor) are now shifting away from with new outreach efforts focusing on drivers, she again defended her news team.

“Pulling in an event with Greg Suhr would not have made the story better,” she said. “For us it was about overall safety.”

@mabmierau @MeghanCArnold @mikesonn You don’t have the right of way if the crosswalk is red.

@dannoyes @abc7newsBayArea I will watch. I’d also invite you to come to 9th & Mission, where every day I’m almost hit by turning vehicles.

If you help perpetuate the attitude that drivers have no responsibility for making streets safe you have blood on your hands. #didntlook

Really @dannoyes? Your focus on pedestrian safety is to encourage #didntlook tweets to blame peds? Seems like you didn’t look at the facts.

.@dannoyes I dare you to say #didntlook to Sofia Liu’s mom. What part of the conversation seems unreasonable again?