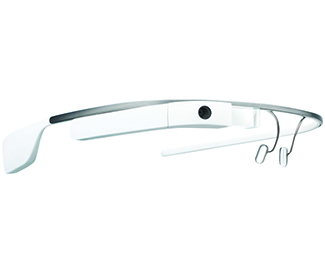 If one Googled “etiquette for wearing Google Glass” last week, the top search result was news of an incident involving Sarah Slocum, a social media consultant who achieved overnight international fame for winding up in a bar fight.

It started Feb. 22 when Slocum popped into the Lower Haight bar Molotov’s sometime before last call. She was wearing Google Glass, a wearable computer that can surf the web, live stream, and record through a computerized prism positioned on a set of glasses in front of the right eye.

Some of those present at Molotov’s — known for its cheap Pabst Blue Ribbon and punk overtones — reacted angrily to her gadget, telling her to take it off because they thought she was recording. Based on what she wrote on Facebook, she didn’t begin to film until after receiving the unwanted attention.

Conflict ensued. San Francisco Police Department spokesperson Albie Esparza said, “one of the suspects grabbed the Google Glass off her face,” according to the police report, “and she ran out of the bar in pursuit. She retrieved the Google Glass,” only to discover later that her purse had been stolen.

Based on two separate eyewitness accounts, a male patron did yank the wearable computer off her face, but gave it back to her; that prompted Slocum’s male companion to throw a punch at him and the two wound up in a tussle on the hood of a car.

Conflicting accounts aside, the incident made international news — likely because San Francisco has already earned a reputation as being ground zero for popular backlash against the tech sector and the dramatic economic shifts that have accompanied its rise.

“What makes this story special,” Slocum wrote on her Facebook page, “is that no one has experienced a hate crime or been targeted for a hate crime, which is what it was, for wearing Google Glass.” (Actually, the legal definition of “hate crime” only covers criminal acts motivated by bias against a victim’s race, religion, ethnic origin, disability, or sexual orientation.) Slocum did not respond to Bay Guardian requests for comment.

“I get you,” one of Slocum’s friends wrote on her Facebook page as the bar fight was mushrooming to epic proportions by the hour. “But when you cross boundaries you can’t complain if the natives fight back! Are you aware of what it’s like to try and LIVE in SF nowadays? What the techies have done to the city and the culture?”

While many have interpreted the now-infamous incident as yet another sign of simmering class tension in a city where neighborhoods are undergoing rapid gentrification, a separate issue will likely cause more flare-ups, particularly as Glass trickles into the mainstream.

Walk into a bar with a computer that doubles as a recording device mounted squarely on your face and you are going to push people’s buttons, so to speak.

Glass users could easily wind up in legal hot water. Just as quickly, anyone a Glass user encounters while using the device to record could unwittingly wind up on the Internet.

In California, it’s illegal to record a private conversation without all parties’ consent. The computerized prism of Glass lights up when it is recording, so third parties can tell if a user is filming because his or her eyeball will be illuminated.

Even so (or if someone hacks his or her way around the light feature), it might not be totally obvious to others whether a Glass user is recording. Not everyone knows what the light means, and the device will remain fixed on the user’s face whether it’s in use or not.

“Google Glass does not change any of the technology-neutral laws regulating wiretapping,” notes Chris Hoofnagle, an attorney at the Samuelson Law, Technology and Public Policy Clinic at the University of California Berkeley. “So for instance, a Glass user who records a conversation without the permission of everyone present will have violated California Penal Law 530, which requires actual or implied ‘all party’ consent. This is the case even if the conversation is in public, so long as the participants have some expectation of privacy in the conversation.”

A few weeks ago, Google published a set of guidelines formulated with input from its “Explorer” community, a group of Glass beta testers that is more than 10,000 strong (Glass, which costs $1,500 for Explorers, is not yet available for retail).

Someone who is “creepy or rude” while wearing Glass, according to these guidelines, is considered to be a “Glasshole.” To wit: “Standing alone in the corner of a room staring at people while recording them through Glass is not going to win you any friends,” Google explains, apparently for the benefit of those socially maladapted Explorers who could not piece this together on their own.

But the guidelines are just that, and it’s not as if Google reserves any right to deny service to people who behave like Glassholes. Google’s stance is that Glass functions almost exactly like a smartphone, with the only difference being that it is positioned on the face instead of held in the hand for a liberating experience of hands-free technology. (There’s another key difference: Any time content is captured via Glass, it is automatically backed up to the cloud, meaning it’s instantly copied onto a server somewhere. Cellphones can do the same, or just store content offline like any other camera.)

As the manufacturer, Google’s line is that it should not be held to account for how people decide to use it — on the contrary, since Explorers are considered by Google to be in a “living laboratory,” early adopters are encouraged to imagine wide-ranging uses for it. Laws ought to govern behavior rather than technology, the Google narrative goes, so there’s no reason why the company should take on any more responsibility for the ramifications that Glass may cause than the manufacturer of a camera or smartphone assumes for its products.

Nor does Google go out of its way to point Explorers to California Penal Law 530, or any other sort of legal safeguard designed to protect privacy.

Yet privacy is the lightning rod at the heart of the Glass controversy — the bar fights would have never started if it weren’t for people feeling that their personal boundaries were being violated. Unlike a secretive government dragnet surveillance program quietly logging all of society’s digital communications, Glass is right in people’s faces, with its built-in recording capability, so the very presence of the device is enough to rankle passersby.

Technically speaking, Google Glass could be used to check email, surf the web, translate a sign in a foreign language, receive step-by-step instructions for a recipe, live-stream a private exchange about a trade secret, or record some VIP snorting coke from across the room.

It could even be used in conjunction with facial-recognition software, though Google officially prohibited this use after congressional representatives expressed concern about that. Nevertheless, a facial recognition app has reportedly been developed and can be “side loaded” for use, by reconfiguring the device — and as things stand, there’s no real consequence for using the prohibited software.

“Can you imagine,” says John Mardikian, owner of Telegraph, an Oakland bar that recently imposed a ban on Google Glass, “if someone recorded everything you ever said when you were drunk?”

Telegraph was the site of yet another showdown over Glass earlier this year. It culminated on an Oakland Art Murmur night when Matt Hunt, a 23-year-old Glass Explorer who had been helping Mardikian with web and social media for his bar, was physically escorted out by security after a confrontation with a bartender, Billy Agan, who’d told him to stop wearing the Google Glass. (This was before Telegraph imposed the ban.)

There are conflicting accounts over just what happened, involving messy allegations of homophobic language and assault on the one side, and defamation and unauthorized use of social media accounts on the other, all of which is refuted by opposing parties. The sordid affair transpired between people who had existing personal ties and has since spiraled into a civil lawsuit, but the one clear outcome is that a ban on Google Glass is now in effect at Telegraph.

“I don’t want it here because it’s anti-community,” Mardikian explained. “I want people to feel comfortable when they are here.” He viewed the Molotov’s incident as confirmation that banning Glass was the right choice, since allowing it appears to invite unwanted headaches.

For his part, Hunt said he rarely uses the camera function because it’s low quality and he has no interest in recording people. He said he supports business owners’ rights to ban Glass, but views it as shortsighted. “Wearable technology is the technology of the future,” Hunt says. “What are you going to do when everybody is wearing them?”

Hunt said he welcomes the privacy debate, but believes it’s rooted in misunderstanding about Glass. “I want privacy as much as you do,” he said, “and I feel terrible sometimes that people think the NSA is watching them through my eyes. … Something I hear all the time is, there’s a camera on your face, and therefore it’s in my face. But what about cellphones? Surveillance cameras? Where do you draw the line?”