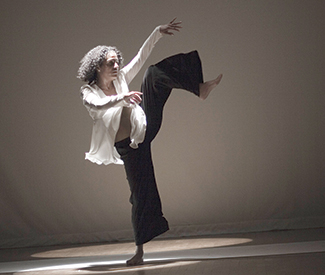 ODC Theater has a good track record of presenting homegrown and visiting companies, some making their local debuts, others having been around for a while. In between these ODC-presented programs — or, increasingly these days, co-presented with other organizations — are slots for artists who want to self-produce, which means that they rent the space for a fixed fee.

The remodeled theater, with its upgraded technical facilities, can accommodate not only dance, but musical and language-based performances. It has become a flexible, desirable venue in a city that has too few of them. Yet if I read history correctly, a kind of open-door policy has always been part of ODC’s mission, even during its more modest times — as in 1976, when it bought what used to be a hardware store and before that a stable.

Bianca Cabrera’s two-year-old East Bay-based troupe Blind Tiger Society (the name comes from a Prohibition-era speakeasy) is the latest of these self-producing independents to take advantage of what ODC Theater has to offer.

Though Cabrera has shown work locally in small studio settings, the world premiere of the hourlong The Aftermath Affair is the company’s most ambitious effort yet. Sixteen women, some clearly more technically trained than others, threw themselves with considerable energy and commitment into fast-paced unisons, scurrying on the tips of their toes one moment, and then entangling themselves head over heels, only to then freeze into identical sculptural poses.

By far the most intriguing aspect of what was a decidedly odd affair was Cabrera’s attempt to create her own language from disparate sources. With a background in cabaret and musical theater, in addition to modern dance and ballet, she has a lot to draw on. While her vocabulary doesn’t yet cohere into a flexible enough tool, the yanking together or simple juxtaposing of elements from modern dance, cabaret, contact improvisation, and even ballet was intriguing in the way it tried to break down easy categorizations and perceptual barriers.

Cabrera’s dancers make good use of strong upper-body movements with articulated necks and shoulders, perhaps borrowed from belly dancing. Much of the movement for the many duets and small ensembles, however, was crystallized out of contact improvisation, with its give and taking of weight, supporting each other, and allowing a movement thread to run its course. Despite their robust physicality, these encounters were so formalized that sometimes they felt regimented. The plain beige-brown costumes, which looked like uniforms, probably didn’t help. Fortunately, several of the solos communicated a controlled but enthusiastic sense of being in the moment.

Contrasting with earthbound sequences were formal unisons of lines: diagonals, wedges, parallels, intersections, and overlappings that could have come from Broadway or movie musicals. To see a kick line of 16 pairs of (more or less) unison legs advance downstage was really most unusual.

Some the imagery also recalled wildlife observations on the National Geographic channel, in which animals sniff each other out and make tentative physical contact only to retreat again. When some of the dancers scurried back and forth across the stage on tiptoes, I thought of sandpipers trying to escape approaching waves.

Toward the end, pallor drops on Aftermath like fog with a sense of impending doom. The dancers plopped to the ground, rolled like logs, and then mechanically turned like the hands of a clock. I couldn’t quite see a connection to the rest of this worthwhile though not entirely successful endeavor.

Ben Juodvalkis’ dramatic and colorful score gave Aftermath its backbone. Cabrera, however, should have hired a lighting designer. Making such primitive use of the theater’s excellent facilities was a waste.

Independent productions at ODC resume with Gamelan Sekar Jaya (April 4-5) and Company C (April 25-May 5). Immediately on the horizon are three co-presentations. March 6-8, as the last lineup of this year’s Black Choreographers Festival, Robert Moses’ Kin has a double bill: as part of the company’s 2014 “BY Series,” Bliss Kohlmeyer, Dexandro Montalvo, and Gregory Dawson set works for the Kin dancers; for Draft, Moses choreographed for 10 guest performers.