Home I watched Rebelution next to Dusty Baker
WriterLaura B. Childs
SectionNoise 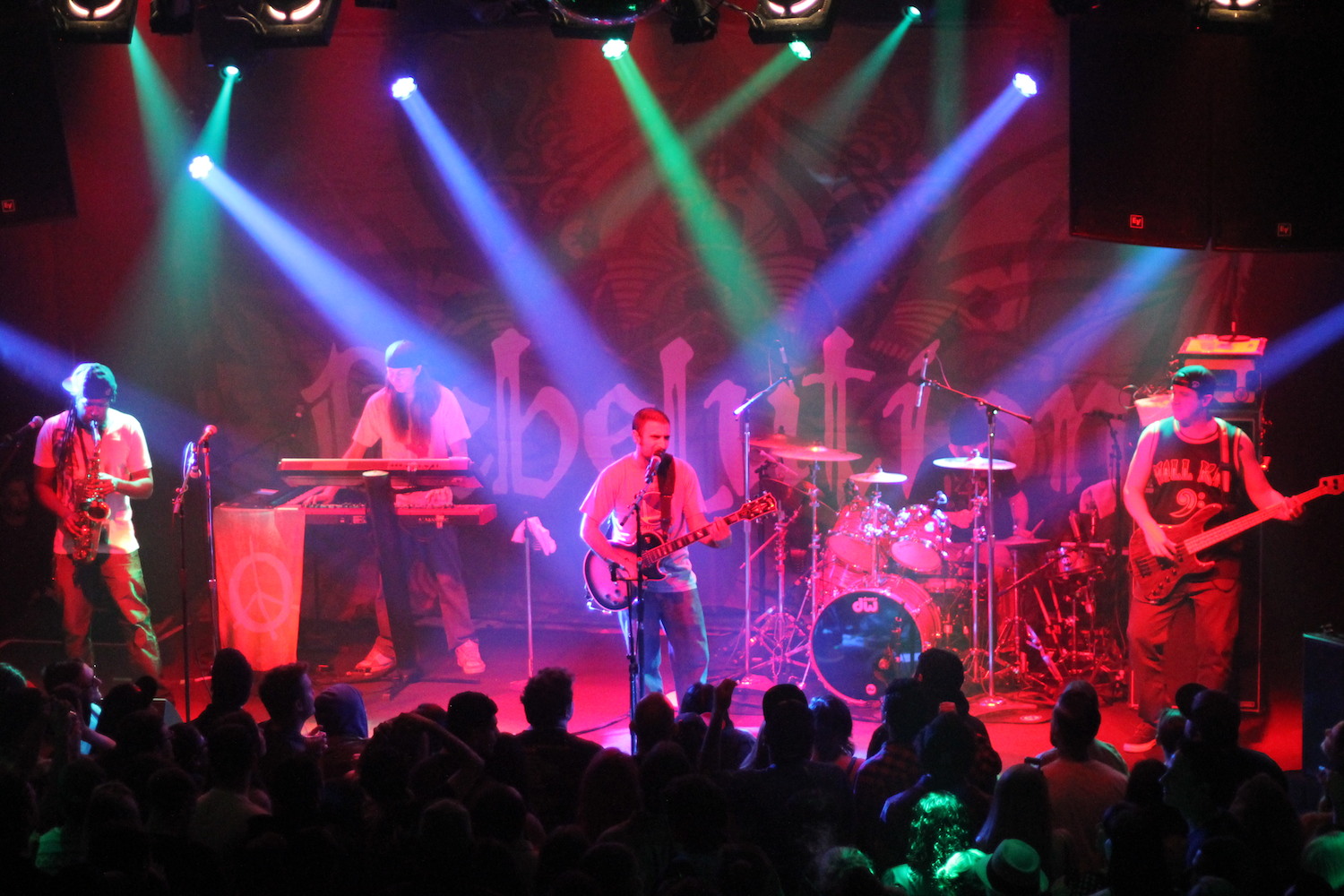 “Put in this story that you watched Rebelution next to Dusty Baker,” said Dusty Baker. As I stood against the railing on the upper level of the Independent Tuesday night, I was unknowingly chatting up the former San Francisco Giants’ manager. The baseball legend chuckled at my slight embarrassment at not recognizing him. He leaned over the railing as he talked about supporting live music and coming here with his best friend from 2nd grade. We overlooked a sold-out room, filled to the brim with an eclectic group of high school and middle-aged reggae lovers.

Rebelution opened the show with a tight guitar riff before the rest of the band jumped in with drums, bass, keyboard, and saxophone — a signature Rebelution move. No fog machine needed, dozen of joints lit up within the first minute creating a hazy shadow around the musicians. If you weren’t high before, you certainly would be through second-hand smoke alone — which got me wondering, is Dusty Baker high right now? Within the first song, my thoughts turned to nostalgia for simpler times.

Disclaimer: Rebelution has been a long time favorite band of mine. I remember listening to the sweet reggae songs on road trips down the coast during high school. In college, I drove through the night to see the band play at Lollapalooza. My ringtone still to this day is the first 30 seconds of “Safe and Sound.”

The band’s front man, Eric Rachmany, started the show off with the crowd favorite “Attention Span.” Images of lazy afternoons and thoughts of making the world a better place overtook me. “It’s a pleasure to meet ya,” he sang.

It really was a pleasure for him. The SF native was genuinely pumped to be playing in his hometown. At every bridge, transition, and break between songs, Rachmany called out to the sold-out venue. “How are we doing San Francisco?” The crowd cheered back with matching enthusiasm. This mutual delight in each other’s presence is such a rare occasion in live music nowadays; Rebelution has a riveting stage presence.

Beyond Rachmany, the keyboard player Rory Carey softly caressed the keyboard offering harmonious beats to Wesley Finley on the drums. Carey’s long blonde locks flowed side to side as he swayed back and forth over the keyboard. Standing well over six feet tall, the timid bassist, Marley D. William, occasionally stepped out from the shadows and commanded the stage. And the excellent touring member Khris Royal stole the show by blowing insane saxophone melodies that matched up perfectly with Rachmany’s guitar.

“He used to play guitar in the hallways at Drew,” said Adam Swig, a high school friend of Rachmany’s whom I met at the show. Rachmany grew up in the Sunset and went to the Drew School. “I was like ‘Man, that’s cheating. Girls are here.’” It’s no doubt that Rachmany is a babe magnet. With his soothing vocals and honest energy, the lead singer had girls in tube tops fawning over him. To be fair, dudes in backwards baseball caps, graphic T-shirts, and oversized hoodies partook in the fawning, especially during his epic guitar solos.

While the vocals and instrumentals were perfectly on par, Rebelution’s performance was not only about music — it was about community. The Santa Barbara band opened for Israel Vibration at the Independent back in 2007, after independently releasing its first full-length album “Courage to Grow.” Since then, the band has played all across the California coast and around the country, selling out local venues and opening music festivals. Two years later, Rebelution founded its own record label 87 Music, named after the band members’ address while at UCSB, where they met. With three albums, an independent label and an upcoming fourth album, the reggae band found its way back to its roots at the Independent in celebration of the venue’s 10th anniversary.

With just a few simple strums of the acoustic guitar, Rachmany quieted the room for “Feelin’ Alright,” the band’s most popular single, about releasing hatred and surrendering to the music. The soft strings reverberated around the hall. To no one’s surprise, the entire crowd joined in with vocals. “I’m trying to pick up the soul’s intention to soak in music relaxation,” he sang.

“They are probably the most successful ‘true’ independent touring band,” said Swig about his high school buddy’s band. Bias aside, the band’s success can be measured by the community love. As Emma wrote last week, the Independent is at the heart of the city. Much like the Divisadero venue, Rebelution relies heavily on the community, which was clearly seen at last night’s show, from Dusty Baker showing support to a surprise performance by Zion I. The show wasn’t about Rebelution; it was a celebration of live independent music. Rachmany spit a verse during Thrive’s opening set. The trumpet player of Brass Magic (first opener) played alongside sax player Royal during “Roots Reggae Music,” a new song from Rebelution’s upcoming album.

At the end of the set, Rebelution performed a wonderful two-song encore, including “Green to Black” with complementary green lights. Basking in the green-soaked room, the audience roared with excitement and the fan-made smoke machine started up again. Rarely have I seen such pure happiness and tranquility in this condensed space. It didn’t matter that the show was almost over, it happened. Waves of enlightenment overpowered Rebelution’s fans, including myself.

“We appreciate your energy,” yelled Rachmany through the thick fog. The crowd cheered back. From the light tunes of “Lazy Afternoon” to the socially conscious lyrics of “Good Vibes,” Rebelution’s intention was to bring honest joy to San Francisco, and I couldn’t get enough of the good vibes.