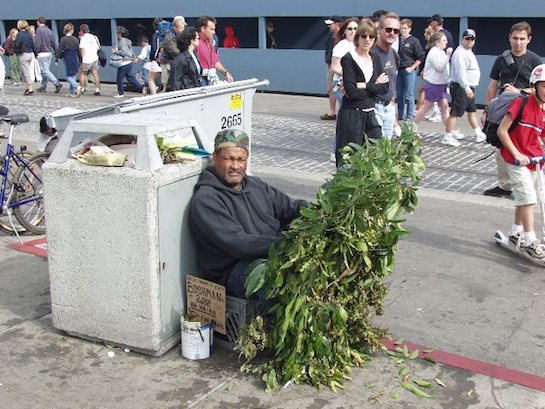 San Francisco has lost one of its own. Gregory Jacobs, KTVU confirmed today, passed away of heart failure last Sunday.

No, he’s not the original Bush Man. That would be David Johnson, who’d been there for 36 years, compared to Jacobs’ 30.

The man was dedicated to his work: sitting along Jefferson street and spooking tourists by shouting “boo!” from behind two large and bushy tree branches.

From the KTVU story:

Jacobs’ cousin says he was a father and brother and a man who always wanted to be in that spot down on the Wharf. And even in his final days he took every opportunity he could to come back.

“Yeah every time he got out of the hospital he would come straight out and sit down (at the Wharf) with his hospital ban (still on his wrist),” Jacob’s cousin Chris Tolbert told KTVU. “He got in his spot as if nothing was wrong with him.”

His family says they just hope people remember him and that what he loved to do was to make people laugh.

Many will share their favorite “I got spooked so bad!” memory, but I want to share a more personal story about Gregory Jacobs from my time working on the streets of the wharf.

At age 17, I was living with a friend after irreconcilable differences with my mother led to too many shouting matches. The day I turned 18 I tried to go back home, but my father’s death years ago put too many strains on my relationship with my mother. At the time, we couldn’t coexist.

So I set out to live with my friend Morgan, who stayed in an in-law apartment in her family’s home in the Marina. Three kids, two parents, a grandmother living upstairs and a golden retriever named Indy welcomed me with open arms (and paws). The house was in the family for generations but the Blackburns were not Marina wealthy, and this wasn’t charity. I needed to pay rent, and I needed to do it fast.

I went to the Wharf.

Where better to earn rent money in a hurry, in summertime? On my own and a little confused about what life beyond high school should be about, I found the Wharf a somewhat daunting place. Beneath the facade of smiling tourists and the scent of tasty clam chowder lies a cutthroat network of businessmen, fleecers and street traders — all looking to make a buck.

Bush Man was there of course, but also many more: Kenny the Clown, a mute magician with “mystery” rings, the Latino graffiti artists, caricature painters, a homeless man begging from inside a trash can (ala Oscar the Grouch), Mary the juggler, and even a fire-eating local comedian who walked barefoot on glass. They, the weird, the bastard stepchildren of Emperor Norton.

Desperate for money, I joined their noble ranks.

A friend set me up selling tickets for the nearby Blue and Gold fleet. Wear some slacks, he said. Clean yourself up, he said. I did both, and with a Gavin Newsom style hair slick and ferry tickets in my back pocket I stood on the sidewalk across Ripley’s Believe it or Not to ply my trade.

I couldn’t have screwed up more. There are rules to the sidewalks, invisible rules you learn only by pissing off the wrong people. I was a newbie, a fresh fish with no claims.

The Wharf buskers let me know that right away.

A jazz musician with an electric keyboard tore me a new one. “This is my spot, damnit!” is the effect of what he said over the course of five minutes, through the haze of a decade-ago memory. It was akin to a dressing down from Kenny G, and just as surreal. I moved 20 feet East to the front of Boudin’s, only to be slapped back by a homeless man in a cowboy hat named William. “Get your own damn spot!” he said. The look on his face went from genial-change-collector to “I’ll kick your ass, kid” in under a second, his fists cocked for a brawl.

This, if you haven’t guessed, is where Jacobs the Bush Man comes in. Intimidated and confused, I wandered to his spot near the Anchorage Mall. He sat perched on a crate, jumping up and shaking his branches like a madman to scare the folks walking by.

I always preferred his style of showmanship to the “original” Bush Man’s — Jacobs had attitude.

“Bet YOU never made her scream like that sir!” he’d say to the husband of a shrieking blonde. “Welcome to America!” he’d say to an Asian family he made jump (who could easily have been from Arkansas themselves). “If you’re havin’ fun, put a tip in the can!” he’d say to the crowd nearby, who applauded approvingly of his spook and scare routine.

And his laugh, god his laugh. You could hear his cackle halfway down the block, and you knew his salt and pepper eyebrows were arched up as he laughed it up at his own jokes.

Gregory Jacobs asked people to call him “G,” at least when I knew him. G showed me the ropes, told me when I could occupy certain spots, and how to get on the other buskers’ good sides. I even took cues from his showy style.

“YOU sir, you look like you could use a bay cruise,” I’d say to a passing tourist with inflections reminiscent of my favorite Bush Man, and at a vocal volume that was similar too. “Don’t you think you ought to take your gorgeous girlfriend on a cruise around the bay?”

Bush Man’s sales tips helped. I was rakin’ in the cash, at least, for an 18 year old. G made much more, pulling in hundreds of dollars a day during peak time in the summer.

G wasn’t a saint for sure. More than once I saw him fist fight with the “original” Bush Man, David Johnson, who told me once that he taught Jacobs everything he knew. They used to split the proceeds, only Johnson claimed he was double crossed later on when Jacobs went off on his own as “Bush 2.”

I don’t know much about all that. All I know is, G was kind, and I liked him.

The Wharf liked him too (for the most part), and he was considered a local luminary. A year after I was selling cruise tickets, I started selling video games at a shop right by the In and Out Burger. One day walking out of my store I was startled, but not surprised, to see G judging a wet T-shirt contest starring the nearby Hooter’s girls.

He paced up and down, taking a good gander, pondering like a man with grave concerns on his mind. He took his job very, very seriously. Everyone watching smiled wide.

Yeah he was ornery, cranky, and loud. But Jacobs had heart, and he looked out for his fellow Wharf folk. G once protected me from the wackier buskers out there on the sidewalk.

One day as I strode down Jefferson street, Kenny the Clown (who ran for mayor at least once, and somehow obtained Steve Jobs’ stolen iPad) decided he thought I needed a hug (and more). If clowns aren’t frightening enough, Kenny is at least 6’5” — he’s a large man. Maybe he was harmless, but I didn’t want to find out.

As Kenny chased me down the street, G took me by the shoulders and said “Run! I got this, I got this!” Swirling around on one foot he raised his palms up to Kenny’s sky high shoulders. “Kenny Kenny Kenny Kenny,” he said, “slow down man! Let’s talk.”

Sometime shortly after that, I sleepily walked to work to inventory the stock of Nintendo games. The sun was still rising. Keys in hand, my mind drifted to the stillness of the street, how early morning Fisherman’s Wharf belongs to the buskers, fishermen and shop owners getting ready for the day. Most of all, I loved how the scent of sea air is easier to detect when you’re not distracted by hundreds of loud tourists.

I breathed in the air absentmindedly, enjoyably, as I reached out with my keys to unlock the gate to the store.

“BOO!” shouted G from just behind my ear, and I jumped halfway off of my skeleton.

“Holy crap G what’d you do that for?! I work here man, I’ve lived here my whole life, I thought you only did that shit to tourists,” I said, a little startled.

I still remember what he said. “Hey man, everyone’s got their time.”

That they do G. I will miss you, and so will San Francisco.