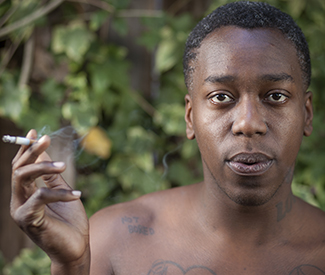 GOLDIES After being informed that Bay Guardian editors and a theater critic vetted his Goldie nomination, Brontez Purnell reacts. “I think it’s fuckin’ rad. I’m pretty into it. A theater critic? Was I criticized?”

Sitting in the backyard of his Mission District apartment, braced leg extended with crutches at his side, Purnell reflects on roughly 12 years of living in the Bay Area (his Mission digs are temporary; he’s about to move back to Oakland). A storyteller of many mediums, his injury prevents him from dancing until mid-March, which is no good since he’s the founder of the Brontez Purnell Dance Company. If you’ve lived here a minute, you might recognize him as a former Sparky’s Diner waiter, working the “drunk tank” every Saturday night.

“When I was 24, my entire dating pool had seen me dance naked or in my underwear — literally get fingered at a Gravy Train!!!! show. They’d see [me] there and think they could be mean to me like, ‘Gimmie my fries!'” He recalls this, along with other illicit memories from his time in the Oakland-based, exclamation point-loving electro clash band.

But like fans of that fad, he’s moved on. He’s 31 now and for the past 10 years the music he writes, records, and performs live is for his band Younger Lovers. Its newest record, Sugar In My Pocket, recently came out on Southpaw Records.

“I don’t think anyone knew I had this background of a punk that had been playing in bands since I was a teenager,” he says, explaining there was overlap between the two music projects with distinctly different flavors, though Younger Lovers’ first album initially received a “hateful response from a lot of the gay boys around.

Everyone thought it was this flash-in-the-pan thing, but it’s something I was actually working on for a long time. It was cool to smash a lot of assumptions with Younger Lovers. People would say, ‘Wow, we didn’t know you played an instrument. We thought you were just kind of drunk and danced around.'”

People still ask him about those old shows, but he admits to not

remembering a lot of it and that some of that life bleeds over to now. “I would call myself an alcoholic.

I would never call myself a drug addict. I feel like the next set of Younger Lovers’ songs will probably be about addiction.”

Purnell is nothing if not self-aware; he points out his own patterns of over-consumption, whether it be food, men, drugs, or alcohol. But his ability to turn weakness into strength is artistry in itself. In his dance company’s The Episodes, universal themes of struggling with identity and finding oneself are apparent, but being black and gay only makes the search for acceptance that much harder.

“I romanticize the outsider. There’s always going to be this running theme of me versus the world, but it’s never so personal to me because I feel like I’m embodying the story of 100 of my friends in one voice.”

In one sequence, “Tub,” Purnell soaks a new pair of jeans while talking on the phone to a friend. The veil of humor is used to deal with heavier topics, as he segues from commentary on butch gays (or “bearded ladies,” as he likes to call them) with their trendy “Hitler Youth haircuts” and how he’s disappointed when they think he’s too effeminate for them, to his own T-cell count, to some suspiciously descriptive-drug scenarios that involve snorting heroin. Another segment recalls a “redneck teacher bitch” from his home state of Alabama, giving the class scientifically incorrect and insensitive, to say the least, explanations of where AIDS comes from.

“I never let humor interfere with what is definitely a message,” Purnell says. “Underneath it all, there is going to be that point where somebody is like, ‘Oh shit. He’s not joking. He’s joking, but he’s totally not joking.’ Humor is actually a really dangerous tool.”

His truth, he says doesn’t always set him free, but as the saying goes — sometimes it hurts. And that’s the beauty of what Purnell does: He looks at his reality, his disappointments, and his personal achievements, and he’s able to persist. He remains one of the more resilient creative forces on the scene he helped make, despite oftentimes receiving second-tier ranking to some of his contemporaries.

Does he play the victim? Well, he gets accused of it a lot, but that’s because of “people’s fucked-up views on what a victim is.” He recites a James Baldwin quote he loves: “The victim who is able to articulate the situation of the victim has ceased to be a victim: he or she has become a threat.”

In short: Purnell is not a victim — he’s a fighter. And as a singer, songwriter, musician, choreographer, dancer, and performer, he proves himself by doing all these things … and then some.