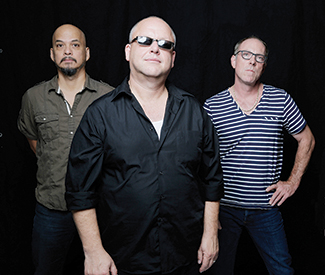 There’s something to be said for recording four great, distinctive albums, and quitting while you’re ahead. This live-fast/die-fast approach worked wonders for the Velvet Underground’s legacy and influence, and one might say it served the Pixies’ notoriously frenetic rock explorations equally well.

While the renowned Boston group has been on the reunion circuit for nearly a decade now, coasting on the fumes of its brief, yet potent, back-catalogue, the prospect of new material has always seemed like an improbable dream of overeager fans. (After all, their last record, Trompe Le Monde, saw its release on the same day as Nirvana’s earthshaking Nevermind in 1991.)

But then, out of nowhere, one day last September, came EP-1, a self-released, digitally distributed four-song set that the blogosphere proceeded to pounce on and dissect instantaneously. While Pitchfork, among other tastemakers, complained of dubious quality, it was clear: With one bold move, the Pixies were no longer mere revivalists, but a full-on band once again.

Next Friday, at Oakland’s Fox Theater, will mark the Pixies’ first Bay Area show in support of fresh material in over two decades, in a performance that should test the band’s ability to blend the old and the new convincingly.

Characterized by the erratic vocals and twisty songwriting of bandleader Black Francis, the angular guitar-work of Joey Santiago, the rock-solid drumming of David Lovering, and the alternately sweet and snarly backing vocals of bassist Kim Deal (who left the band last year, without warning, during the EP-1 sessions), the Pixies remain one of the most impactful, singular groups from the transitional period between rock’s punk and indie movements.

From the initial jolt of the Come On Pilgrim EP (1987), to the devastating four-album punch of Surfer Rosa (1988), Doolittle (1989), Bossanova (1990), and Trompe Le Monde (1991), the band’s signature balance of abrasion and tenderness continues to permeate the rock world incalculably. Radiohead has repeatedly admitted their indebtedness to the Pixies’ sound, while Kurt Cobain contended that “Smells Like Teen Spirit” might not have been written without it. As Deerhunter, TV on the Radio, and the end credits to Fight Club continue to prove, the Pixies’ influence remains powerful as ever.

After calling it quits in ’92, the band regrouped in 2004 (to many a fan’s surprise) for a reunion tour that was only to last a year. After one year turned to five, and a front-to-back Doolittle tour stretched the revival to the seven-year mark, the four members came to a realization.

“We all looked at ourselves and said, ‘Wait a minute, hold on. We’ve been a band longer during this reunion than we were initially,'” Lovering told the Bay Guardian from a tour stop in Washington, D.C.

“There was talk of doing new material, but with all this nonstop touring, nothing came to fruition until maybe about two years ago. We stopped touring, started writing stuff, and then we went and did it.”

Just last month, the Pixies landed another sucker punch with EP-2, the band’s second release since last September, while rumors of an impending EP-3 have begun to circulate since then. Produced by Gil Norton, who’s worked on every Pixies release since Surfer Rosa, the newly released EPs bear a fuller, rounder, warmer sound than any of the band’s past work, while leaving Francis’ erratic songwriting and the group’s off-kilter dynamics largely intact.

“Blue Eyed Hexe” strongly recalls the cowbell-addled thump of “U-Mass,” while “Greens and Blues” brings to mind the zigzagging chord progressions of “Where Is My Mind?”. “What Goes Boom” evokes the surfy explorations of Bossanova, while “Indie Cindy” and “Andro Queen” approach the jangly sensibility of “Here Comes Your Man,” before going unpredictably down their respective paths.

“We just like to drop surprises, I guess,” Santiago explains, while on tour in Durham, N.C. “We just try and do something different out there. And I think we might be one of the first ones to do this…you know, doing a series of EPs.”

Speaking of surprises, the band was dealt a serious blow during the sessions for the EP series, when Deal left the band unexpectedly, for reasons she has declined to elaborate on in the months since. The former bandleader of the Breeders, whose bass lines and soft backing vocals proved integral to the Pixies equation in their contrast to Francis’ manic wail, Deal left a sizable void behind upon departing the group.

“When Kim did leave, we didn’t know what to do,” Lovering explains. “We were in a lurch, and we were thinking, should we get a guy bass player? Or should we quit the band? Or whatever. But, what the Pixies is is a masculine/feminine thing. It’s always been that yin and yang, especially with the vocals. That’s just part of the Pixies. So that’s what we had to do. We had to get a female, you know? We’re keeping with that.”

After hiring Kim Shattuck of the Muffs to assume Deal’s spot for a brief European tour, the three core members made the decision to move forward with Paz Lenchantin, the former bassist for A Perfect Circle.

“Paz is fantastic,” Lovering mentions. “She’s so good, she’s making me play better. I really have to watch how I’m playing, and keep it up. But it’s wonderful; it just sounds very powerful and precise. And her vocals are incredible, as well.”

“Not to diminish Kim,” Santiago says. “We miss her very dearly, but after a while, you know, life goes on. The hard reality is, good is good, and Paz is a real bass player. She’s a pro.” So how might Lenchantin approach Deal’s signature tracks like “Gigantic,” “Silver,” and “Havalina”? How keenly will Deal’s absence be felt? Aside from the prospect of hearing new material played live, Lenchantin’s introduction to the Pixies leaves more questions to be answered than any other element surrounding next Friday’s show.

Faced with a lineup change that smacks of uncertainty and transition, and the mixed critical response to their first new music in 22 years, Francis, Lovering, and Santiago have more to prove this time around than ever before. Yet Lovering contends that this unstable territory is just what the Pixies need after a decade of celebrating  past glories.

“I don’t think we could’ve toured anymore, just going on this reunion kind of stuff. We just needed to do something new.”