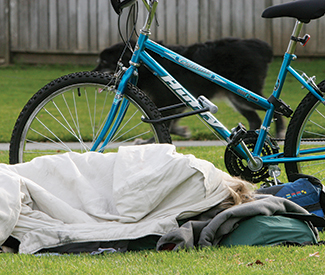 An ordinance to close all San Francisco city parks at night drew fire from homeless advocates, who called out sponsoring Sup. Scott Wiener and the Recreation and Park Department for targeting the homeless, charges they denied, claiming it was really about preventing vandalism in parks.

At this point, with enforcement slow to begin, the jury is still out. The ordinance passed on Nov. 5, on a 6-5 vote. Wiener denied allegations that it would criminalize poverty or homelessness.

“If the police wanted to remove people sleeping and camping in parks, they already have the tools to do that. This legislation does not give them those tools beyond what they have,” Wiener said at the hearing.

Sup. London Breed was skeptical of that claim, telling her colleagues, “I’ve been told again and again this will not target the homeless. But if it doesn’t target the homeless or the investment banker or the firefighter, who will this law target? Suspicious looking people in hoods? Teenagers?”

New reports from homeless advocates on social media have bubbled to the surface, raising concerns that the crackdown had begun.

“We’re starting to see more queer and trans youth getting these tickets,” one tipster said on Facebook, a post which was widely recirculated. So the Guardian decided to dig through citations in two popular “campgrounds,” Buena Vista Park and Golden Gate Park, to see if those concerns bore out.

Two of the leading nonprofits serving homeless queer youth — LYRIC and Larkin Street Youth Services — weren’t yet able to point to specific cases of the new law being used to roust homeless youth.

“I think you’re speaking with me because I’d have my ear a bit closer to the curb,” said Jefferson Fellows, manager of Larkin’s Haight Street Outreach center. “I’m just another perspective and not seeing the whole picture.”

Fellows’ outreach center most often sees youth from Buena Vista Park, which is generally used by homeless youth who are passing through the city or the state on their way elsewhere. Golden Gate Park is home to more “permanent residents,” for lack of better term, of the parks.

Tickets get regularly issued to campers in both parks, where it was illegal to camp even before the latest park closure ordinance.

“This one kid who kept every one had a telephone book thick of tickets,” said Fellows, whose group helps young people pay or challenge the tickets. “I think for the last two three months or so he was getting two tickets a day, constantly. He had no hope to pay off any one of them, let alone however many he had.”

Fellows sees many of the youth who sleep in Buena Vista Park, but said he hadn’t seen an uptick in citations, nor has he heard of youth being cited under the new law.

Trying to get the inside perspective, we sat on steps at Buena Vista Park in the rain drinking a beer with Wizco, who took his name from the last place he saw his Winnebago: Wisconsin. Wizco drank a Blue Moon, lamenting his lack of citrus (the Guardian had an Anchor Steam, for the record). The homeless young man is a writer, and found love here at Buena Vista Park, on “the mountain,” as the kids call it. As with many love stories, his hit a snag.

“She has a writer’s soul,” he said, which is what drew him to her. But soon things soured. “It’s only been me and my chick up in the mountain, until she got schizo’d out and left me to go to a higher mountain.”

And isn’t that always the way — loved ones sometimes leave us for a higher mountain.

As for the park closure law, Wizco confirmed he’s been left to sleep most nights, only to be roused before sunrise each day. “The man in the yellow coat,” is how he referred to the Park Ranger, but sometimes it’s an SFPD officer rousing him, he said.

That conforms to the police records we found. SFPD citations for the month of January and February show the usual roundup of park campers and sleepers every morning, usually one round at 4am and another at 8am. Officers from Park Police station issued over 20 citations and warnings, mostly citations, to folks sleeping and camping in the parks on Jan. 30 alone.

But no citation or warnings were listed under the new park closure law. And from what the Recreation and Park Department told us, the rangers haven’t thrown anyone out of the park under the new law yet either. But why?

“We’re in the process of implementing and enforcing the legislation,” said Connie Chan, RPD’s deputy director of public affairs.

The department hasn’t put up any signs about park closure yet. And without signs, she said it can’t enforce anything.

After that, we’ll see if the fears of homeless advocates are founded. Until then, Wizco is happily enjoying his time in San Francisco. “You have indie record stores and health, growth, people and hope, angels and recovery,” he said. “I’m loving this town.”