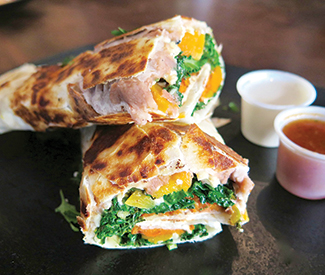 We finally have some gray skies, all the better to contrast the megawatt Technicolor interior of the new Loló (974 Valencia, SF. www.lolosf.com) location on Valencia. The larger digs, now sporting 65 seats, also boast two bars — mezcal lovers won’t want to miss the new nine-seat Agave Bar in the back.

Once you have a drink in your hand (like the Mezcal Mula, with pomegranate-infused tequila, mezcal, ginger beer, and bitters), start taking a closer look at the décor by Lorena Zertuche: Mmm-hmm, those really are men’s suit jackets stitched onto the back of a banquette, and yes, someone did in fact fold 1,000 origami boats for that wall. And no, you didn’t take acid about an hour ago. Then again, maybe you did.

I also love the leather belts stitched down the center of the bench seats, which are in fact pickup truck seats. Beep beep. Some new dishes on Jorge Martínez’s Jaliscan-Californian menu include Dungeness crab croquetas, oyster and pork chin confit sopes, and panko-encrusted avocado tacos. You have plenty of exploring to do. Hours are Mon–Thu 6pm–12am, and Fri–Sat 6pm–1am. Lunch and brunch service will launch in March.

Another opening in the Mission: Prubechu (2847 Mission, SF. www.facebook.com/prubechu) has taken over the former Roxy’s, highlighting traditional recipes from Guam, and of course there will be a California twist on a few dishes — like red rice with pork and broccolini, and golai hagan suni with spigarello, eggplant, sunchokes, turmeric, and coconut. Tue–Sat 5pm–10pm.

Green juice, beer and cheese or onion and potato piroshkis, tasty po’boys, cappuccino, garam masala spice, Beauty’s Bagels, some of the best damn carrot cake you’ve ever had … . The new Second Act Marketplace (1727 Haight, SF. www.secondactsf.com) has you covered. This warren of food stalls opened in the former Red Vic Movie House location, and now contains five individual businesses that are ready to feed and hydrate you. High Cotton Kitchen is the New Orleans-style lunch spot with Sightglass coffee, while Community Craft is a cooperative bakeshop consisting of nine bakers. And then there’s Anda Piroshki, RAW juice bar, and zesty goodies from Spice Hound. Extravaganza!

When was the last time you saw $1 organic coffee, or a chorizo burger for $8? There are some new folks in the kitchen of New Central Café (301 S. Van Ness, SF. 722-0601), and they want to make sure you’re well fed for $10 or less. You can also pick up a fresh-squeezed juice, and other healthy options, like the quesadilla California: a housemade tortilla stuffed with kale, butternut squash, sautéed onion, refried beans, fried sweet potato, and sour cream. Daily 7am–6pm.

Speaking of brunch, the next time you’re taking a Thursday off (way to hit it hard on a Wednesday night, you animal), you can now get your loco moco on at Namu Gaji (499 Dolores, SF. www.namusf.com) which has extended its brunch hours to Wed–Fri 11:30am–4pm and Sat–Sun 10:30am–4pm.

La Urbana (661 Divisadero, SF. www.laurbanasf.com) has a sweet taco Tuesday deal: every Tuesday in the Mercado (Urbana’s garage space next door), you can get two street-style tacos and a beer for $7; with a shot of house mezcal, it’s $10. Tasty trouble, that.

Have you ever had a Fryin’ Maiden or Notorious P.I.G.? If you’ve ordered the stoner comfort food from the Brass Knuckle (www.brassknucklesf.com) truck, then you should be familiar with chef Shellie Kitchen’s fun — and obviously music-inspired — menu. She just opened a brick-and-mortar location in the Tenderloin at 749 Larkin St., so you don’t need to chase the truck down when you want a Snoop Dog for lunch. Or Tots and the Maytals. Heh.