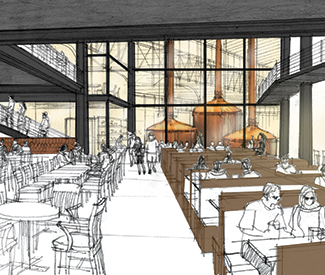 BEER Just across McCovey Cove from AT&T Park, the San Francisco Giants and Anchor Brewing Company are concocting a beer-filled future for Pier 48. As part of the Mission Rock development project, the new Anchor brewery, slotted to break ground in late 2015, would allow Anchor to quadruple production and remain in San Francisco.

The proposed brewery will eventually contain a restaurant, museum, educational space, and distillery. It’s being designed with giant windows that will offer an unprecedented view of operations. Brewing would be transparent enough to be observed while casually strolling the pier or even from certain seats inside the ballpark.

“As you come in and you look into the brewery, the first thing you’ll see will be one of the cold fermentors,” says architect Olle Lundberg, referring to the large cooling pans or “cool ships” Anchor still uses to chill its boiled beer batches. “The bar for the restaurant will look out over that, so you’ll be looking out over this kind of sea of beer into the brewery. If that doesn’t inspire you to drink, I don’t know what will.”

Anchor has been poised to expand for years. It even has a copper German brewhouse ready to install in the new facility. It’s been sitting in storage since it was purchased in the early 1990s by then-CEO Fritz Maytag. He left the collection of kettles, mash tuns, and fermentors unused when his plans for a new brewery were sidelined by that rarest of business concerns: happiness.

“In 1990 the brewery was doing about 100,000 barrels, which made it the number one craft brewery in the country,” says CEO Keith Greggor in his cheery British accent. “Further expansion was going to be very difficult, very costly. At the same time, [Maytag] got very interested in distilling and he decided, ‘You know what? I’m number one. I don’t need to focus on being the biggest and the baddest. I’m happy with what I’m doing and I’m going to focus on distilling now.’ And he was one of the first in that kind of craft distilling revolution that’s happened.”

This was the second craft revolution that Maytag, the great-grandson of Maytag Appliance founder Frederick Maytag, helped to ignite. In 1965, he was enjoying a “Steam Beer” at a North Beach restaurant when he was told it would be the last he would ever have: the brewery, which had survived Prohibition decades earlier, was closing. Hearing this, he purchased a controlling share of the company, saving from extinction not only a brewery in operation since 1896, but one of the only known styles of beer to have originated in America. “Steam Beer,” technically classified as “California Common Beer,” is a lager fermented at ale temperatures.

But times have changed since 1965. Craft brewing has been revived in America to the point that decorative plastic hops are A Thing. And competition demands more than being the only kid on the block with flavorful barley-pop. So in addition to the new brewery plans, Anchor will be discontinuing its bock beer and Humming Ale, while offering a new saison and an IPA.

“We like to say that we’re resting those beers,” says Greggor of the discontinued lines. “We have to respond to the consumer and retail demand for beer. And the demand for today is: ‘I want new. I want new.'”

And new it will be. Since 2010, when Maytag sold the brewery to the Griffin Group of Novato, most noted for their work with Skyy Vodka, Anchor has introduced several new beers to its regular line, including Brekle’s Brown, California Lager, and Big Leaf Maple. One the most recent is Small Beer, which draws from well-trod brewing techniques, making a lighter, more session-able ale from the mash of Old Foghorn — a more robust, flavorful brew.

And the Mission Rock development hopes to get even more out of those spent grains. As part of a proposed district-wide energy management facility, Anchor’s waste and run-off could be used to create methane for heating, and gray-water for toilets and sprinklers.

“We’re looking at all kinds of crazy, fun ideas for waste recapture,” says Fran Weld, director of real estate for the Giants. (The team, which is partnered with the Port of San Francisco on the project, asked Anchor to be the first tenant.) “The idea of looking at a district-wide solution is you can consolidate all of those chilling towers and boilers that the developers would otherwise build. You can do fewer of them because of the fact that you’re meeting the demands of the site as a whole — so your baseline of required energy is much lower.”

Still awaiting final approval from city agencies, the Mission Rock plan also includes mixed-use office, retail, restaurant, and manufacturing spaces, as well as affordable housing. But perhaps most remarkable is the development will enable San Francisco’s oldest and largest manufacturer to remain within the city, though at no small cost.

“You can imagine there are much, much cheaper places for them to build this facility,” says Lundberg, whose design firm is joint-venturing the project with Bohlin Cywinski Jackson. “They could just keep Potrero Hill as a kind of, you know, boutique signature facility and then make most of their product in Chico or somewhere. But instead they’ve decided that they really want to be here and they want to do it all here and there’s a big number attached to that.”

When asked if he has considered a opening an additional brewery elsewhere (as Petaluma-based Lagunitas has done in Chicago), Greggor is almost offended.

“I believe that Anchor belongs in San Francisco. That’s our history, that’s our heritage,” says Greggor. “People have an affinity to us, whether they drink beer or not, they like us being part of the city. They applaud our efforts to stay on in the city and make beer here even though it’s a very expensive environment to do so. And we ourselves are all committed personally and passionately to the city. And we don’t want to go anywhere else! We’ll make less money and live here, please.” *

Thirsty for more? Check out all the sudsy goings-on at SF Beer Week (www.sfbeerweek.org), including events featuring Anchor beers, now through Sun/16.