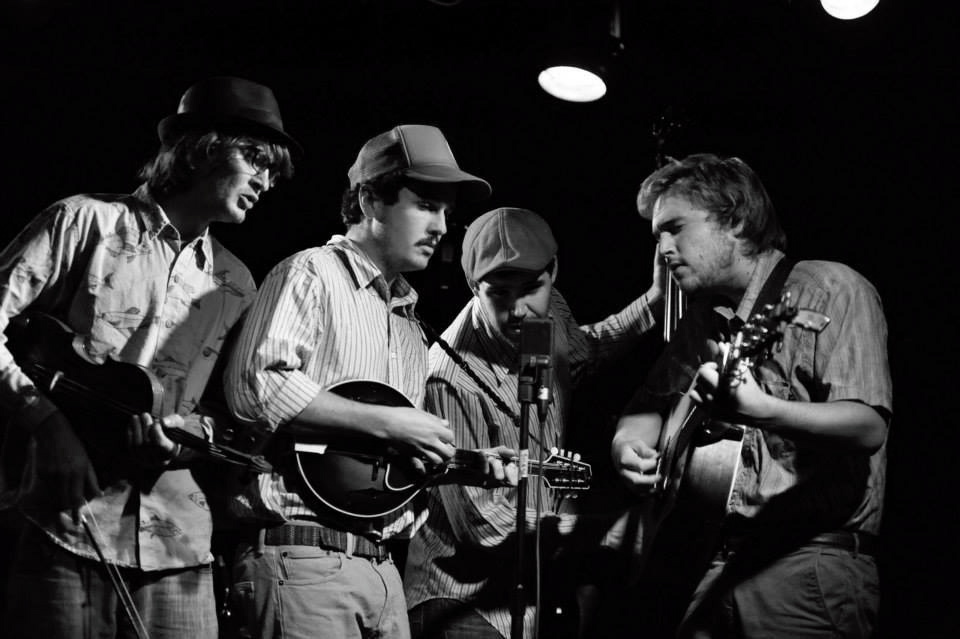 There’s something in Steep Ravine’s music that sounds older than their (fresh-out-of-college) years: It’s a calmness, a soulfulness, a complete lack of pretention — which is not something that can be said for many bands of young dudes who hope to be the Next Big Thing in bluegrass and Americana. These Bay Area natives (Berkeley, Mill Valley, Menlo Park, and Watsonville, to be specific) are far from over-serious, but they take this music and its history seriously, and the result is pretty sweet. Ahead of their album release show at the Starry Plough this Friday, Feb. 7, we caught up with guitarist and vocalist Simon Linsteadt to hear about their influences, burrito preferences, and the difficulties of starting a band while getting hassled by UCSC security officers.

SF Bay Guardian: How did you all meet and when did the band form?

Simon Linsteadt: [Violinist] Jan Purat and I met in high school, where we first began playing music together. We played Django Reinhardt songs like “Daphne” and “After You’ve Gone,” among other things. It was always acoustic. Then Jan went to UC Santa Cruz, and I followed a couple years later after I graduated high school. By then Jan had already established himself as the go-to fiddle player in Santa Cruz and had a band with Alex, our bass player. We would jam at parties and out in the Porter Quad, which was the big courtyard outside of my dorm where all Porter students would hang out. Sometimes we would play way too late at night and the security officers would have to boot us.

It was at the end of that year that we met Andy, a UCSC graduate who lived in town working as a farmer. He was clearly the most slammin’ mandolinist we had ever met, and it was immediately obvious that he had a rare pair of golden ears. We immediately became friends and started to busk down on Pacific Avenue, and we gained a little bit of recognition among the eclectic group of locals and UCSC students. It was around Christmas of 2012 that Alex started playing with us; we had him join us for a holiday show at the Sweetwater Music Hall in Mill Valley. Alex is one of those few individuals who has an extremely “deep pocket” as we like to say, meaning his sense of time is crystal clear and just perfectly on point. We started playing as a quartet around the Bay Area performing original tunes, our spin on traditional bluegrass, and some gypsy jazz songs. After a year, we all at once recorded our debut album, embarked on a 40-day tour across the US, and in October 2013 we all moved into a house together in Richmond.

SFBG: Where does the band name come from?

SL: The name Steep Ravine comes from an amazing spot on Mt. Tamalpais. I personally always liked the name of the Steep Ravine trail, and always saw it as a cool potential band name. A lot of lyrics on our album are inspired by the many excursions I have taken on Mt. Tam. Near the top of the trail is an area called Ridgecrest. When we first got together as a band, we went up there one day to play some music. It is an amazing lookout about 1000 feet up from the ocean and it looks out over the whole Bay Area, out to sea as far as the Farallon islands, and on clear days, all the way north to the lighthouse on the bottom of the Point Reyes Peninsula. Pretty astounding.

SFBG: How would you describe your sound? What did you grow up listening to/playing, and who are some of your mentors?

SL: We’re all uniquely inspired by different musical styles, but it’s safe to say that we all come together around the genre of “bluegrass,” and we all love it very much. It’s some of the most energetic, soulful, expressive music out there. It is interesting though how we all found ourselves there. Jan Purat was classically trained from an early age, and can sight-read crazy classical pieces that look like chicken scratch at most to the rest of us. He has also studied his share of jazz. I picked up the guitar around the age of 10 after listening to Neil Young, who is my all-time hero as a songwriter and musical force, and I have studied my share of jazz as well. Andy O’Brien is a fabulous mandolinist who can play solos with the same sheer power and technicality as the greats in traditional bluegrass. He also has a very unique capability of bringing that energy and classic sound into the songs we compose, with very colorful melodic and rhythmic ideas. As I call to him downstairs asking him what his musical influences were growing up, he responds “Jerry, and The Beatles.” Alex grew up playing the drums, and was inspired by the bands like The Meters and the greats of Afrobeat. He also grew up with bluegrass and folk music in his family. He is a rock solid bassist with an explosive rhythmic feel.  In terms of our sound as a band, I don’t really know how to answer that. What we write is not really bluegrass, or jazz, or singer-songwriter, or folk, or whatever you want to call it. Maybe somewhere in between those.

In terms of influences…the obvious ones that come to mind are Bill Monroe, Frank Wakefield, Kenny Baker, Doc Watson, Norman Blake. This is just a small list, but it represents the folks who were true musical forces back in the day, and who inspired many, many musicans through out the years. But just as we came to bluegrass from a range of genres, when we arrange and write music, all of these genres filter though the genre of bluegrass, and we are left with something that is entirely our own. I was personally turned onto bluegrass by Jacob Groopman, who is a fabulous guitarist, mandolinist, and vocalist. He plays with Front Country and Melody Walker, two really hot bluegrass Americana acts from the Bay Area. He taught me to flatpick and showed me the album Manzanita by Tony Rice when I was 16 or 17, and that was the beginning of the end. Andy O’Brien studied mandolin with Jeremy Lampel in Santa Cruz, and Jan has studied with Chad Manning and Evan Price, to name a couple.  We are also very fortunate to live down the road from Bill Evans, banjoist extraordinaire, who has been something of a mentor to us over the past half year or so. There is a rich bluegrass, folk, and jazz scene throughout the Bay Area, and many of these people live right here in the East Bay. We feel very fortunate to be surrounded by such a friendly and talented community of driven musicians.

SFBG: What’s on tap for the band this year?

SL: We have some exciting touring coming up, from spring to fall. We will be playing at the Parkfield Bluegrass Festival, Four Corner Folk Festival in Pagosa Springs, The Redwood Ramble in Mendocino, Pickamania in New Mexico, The Fathers Day bluegrass festival in Nevada City on the Vern Stage, the Folklife Festival in Seattle, and the Cloverdale Fiddle Festival. And we’re always writing new songs and compiling compositional idea for our next album, which we predict that we hope to start recording in the fall of 2014.

SL: Jeez, Jan and I would probably say Gordo’s Taqueria or the Cheeseboard. And I think we all could agree upon the fact that there are some amazing grocery stores especially in Berkeley that have great, fresh produce, such as Berkeley Bowl and Monterey Market. We keep our fridge stocked. Also, Andy and Alex are both very experienced gardeners, farmers, and landscapers, and they have planted a very lush garden at our house in Richmond, which is filled with mustard greens, kale, beets, herbs, and some very heady cacti.