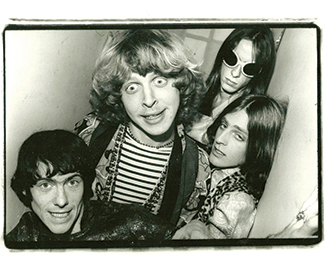 LEFT OF THE DIAL As legend has it, there was a time when you couldn’t walk the streets of Berkeley without running into him. He accosted you from posters adorning bar bathroom doors; he lurked around corners, plastered to telephone poles. He was mischievous, sometimes foul-mouthed, usually up to no good, but he always meant well. He wanted you to rock out. He was Pyno Man, and he was everywhere.

“Pyno Man was basically just the dream anybody has of being great, but instead of working a regular job and having fantasies about doing crazy rockstar things, he’s actually trying it all the time and failing. So he’s out there on the street acting like a rockstar, but everyone just thinks he’s crazy,” explains John Seabury, artist, creator of Pyno Man, and bass player for the relatively short-lived but locally legendary East Bay garage-punk outfit Psycotic Pineapple, for which the wild-eyed, mohawked, anthropomorphized pineapple served as mascot. “To me, that was logical.”

A staple of the East Bay punk club scene of the late ’70s, Psycotic Pineapple held court at the Keystone in Berkeley, sometimes playing SF’s fabled Mabuhay Gardens with friend bands, like the (underrated) power-pop maestros the Rubinoos. PP songs were about youth and drugs and sex, and you could count on them for an insane live show. But something in the band’s demeanor set them apart from the prevailing punk attitudes of the time: There wasn’t much they took seriously — least of all themselves.

“We didn’t really call them punks at that time, because that just wasn’t what we would call people who played music like them. They were just outlaws in a way, because they brought this sort of pop aesthetic to punk music. They were thumbing their nose at it and wrapping their arms around it at the same time,” says John Cuniberti, a producer, mastering engineer, and longtime friend of the band who helped the guys finally re-issue Psycotic Pineapple’s sole album, Where’s the Party?, on CD in 2012 — something that led to the band playing its first live show in more than two decades, which inspired Cuniberti to make a documentary about the band in the process.

There was something determinedly fun about Psycotic Pineapple, says Cuniberti. “I was working with the Dead Kennedys at the same time [’70s], and it was political, straight-up social commentary, songs about death and war and all these things. These guys played pop songs about relationships — really well-written pop songs, the songwriting was always very compelling to me — but they were rowdy, and they did it with an ‘I don’t care if you like us or not’ kind of attitude. There was an outrageousness to it.”

The band put out its lone record 1980, packed with 11 gleefully irreverent tracks that ran just over 25 minutes altogether. In 1981, something happened that no one could have predicted: Guitar player Henricus Holtman suffered a brain aneurysm, hindering his dexterity on his right side. The band stopped playing live. While most members remained involved in the local music scene — Seabury’s art adorns posters and t-shirts for a ton of other bands — Psycotic Pineapple mostly became the stuff of Bay Area folklore. But the fans were still out there. More than 30 years after PP disbanded, about a year after the band’s official reunion show at Bottom of the Hill, the music somehow doesn’t sound dated at all. They’ll headline the Gilman this week for the first time, with Pinole’s own Bobby Joe Ebola and the Children MacNuggits (whom could be said to follow in PP’s footsteps in terms of ethos, if not sound) opening.

“I don’t think the music feels old, but I’ve always thought that,” says Seabury, whose art fills a booklet that accompanies the re-issue CD. “By the time we broke up a lot of bands were starting to imitate that kind of attitude — Camper Van Beethoven, some others. I think we would have fit right into the alternative rock scene. We were kind of like these New Wave clowns making fun of punkers&ldots;which, as far as bands we gigged with go, their fans didn’t really like it. I remember opening for 999 and the Dickies, and both of their fans just hated us. They were booing us already, so we decided to close the set with ‘We’re an American Band,’ and that’s when the bottles started flying.”

They haven’t gotten to play together too often since the official reunion — for one, keyboard player Alexi Karlinski lives in Eastern Europe for most of the year. But while he’s back in the Bay for this stint, the guys plan to record a few new songs.

Maybe don’t call it a comeback just yet, says Cuniberti. But “I think they’re worth listening to, and there’s a lot of music being made that I can’t say that about. The songwriting is so good, and it’s timely, it still sounds fresh. You can hear in this record that they really love what they’re doing.”

While we’re immersed in the warm glow of East Bay punk history: 1-2-3-4 Go! Records, the independent record store, label, and all-ages venue housed in a deceptively small couple of rooms on 40th Street in Oakland, is expanding into the recently vacated space next door. From their crowdfunding campaign:

“A few weeks ago we were told our next door neighbors would be leaving and we could take a section of their space for an expansion. The catch is that we need to take the space by February 1st or it would go to someone else. As a small business with employees to take care of and regular bills to pay we don’t tend to have a lot of extra expansion capital on hand, especially on short notice. So we come to you, the good people who have supported us all these years and ask for you to join us in bringing the store to this next level and to continue to offer the great music and art we have been in our venue space.

In order to complete this expansion we need to do the following;

Knock out the adjoining wall.

Paint the interior and exterior to match our existing space

All new lighting that will stretch the length of both spaces.

Purchase new Mic’s, Cords and Stands for the venue.

Our plan is to have our Grand Re-Opening on March 15th to coincide with our 6th anniversary. We will have a sale during the day and a private event from 7pm to 10pm with food, drinks and music for supporters who come in at the $50 and above level who RSVP.”

As of this writing they have just under a week to go and still need to raise about $7,000. Want your as-of-yet unborn kids to know what actual record stores are? You know what to do: 1234gorecords.com.

Back here on this side of the Bay, A Million Billion Dying Suns — the psych-rock project of busy guitar virtuoso Nate Mercereau, who tours with Sheila E., among others (last week he was backing Dave Chappelle at the SFJazz Center) — have embarked on a mini-residency of sorts at the Knockout, starting with a Feb. 11 show. They recently had a song featured in a GoPro commercial, accompanying Shaun White as he blasts through snow-covered hills, but the band’s had my attention for about a year now, especially since the arrival last November’s Strawberry EP, with its slow-building, expertly crafted wall of spaced-out guitar fuzz, particularly on “Strawberry Letter 23,” a cover/homage to Shuggie Otis.

“I record a lot of stuff by myself, and Shuggie Otis has been a huge inspiration in that respect,” says Mercereau, who recently moved to LA, though he finds himself back in SF “every two weeks or so” — the band’s studio is still here. “Though it was also for our friend [manager and friend to many an SF musician] Steve Brodsky, who passed away last year. He really loved that song, and it felt like a way to do something for him.”

The Knockout feels a little small for the seriously powerful five-piece, Mercereau will acknowledge, but he wanted a residency at “a place our friends can walk to, a down-home punk rock spot that’s in the neighborhood.” If all goes well, he says, AMBDS will have another few shows here shortly, regardless of his new home base. “It’s easier than you might think,” he says. “We just live on Highway 5.”