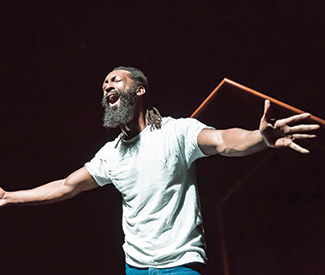 DANCE For its 10th anniversary, the Black Choreographers Festival: Here & Now won’t start with its customary lineup of performances, but with a ritual so ingrained that many dancers continue it even after they have retired from the stage. Dancers are obsessed with taking classes. Classes are why they scrape money together. If you’re part of a company, classes are a part of your daily routine. If you aren’t, you’re on your own — and at around $10 or $15 a session, that can quickly add up to a serious amount of cash.

So how about 10 cents a class? At this year’s BCF, you can pay 50 cents for an all-day pass, good for up to five classes at Yerba Buena Center for the Arts’ Forum, taught by Robert Moses, Nora Chipaumire, Marc Bamuthi Joseph, and Rashad Pridgen. A showcase by the next generation of dancers — Dimensions Extensions Performance Ensemble, Destiny Arts, and the Village Dancers — is included in this bargain price.

BCF arose from the ashes of the renowned but collapsing festival known as Black Choreographers Moving Toward the 21st Century. At the festival’s final concert in 1995, financial constraints prevented it from inviting out-of-town artists, so it was an all-Bay Area show. That’s where the seed for BCF was planted. Laura Elaine Ellis, who had just started to choreograph, danced that night.

“I was so honored to be included,” she recalls. “After the performance, all of us realized that this was the first time ever that we all had shared a stage together. It felt so good.”

Kendra Barnes didn’t perform that evening — she was still a San Francisco State student — but “I had attended every concert, and I had just started my own company.” The two women realized that they, and many of their colleagues, would have to self-produce. The African and African American Performing Arts Coalition was a first, short-lived attempt.

But it was when Ellis and Barnes had one of those “what if we…” moments that BCF was born. “We wanted to create a community where we could come together and see each others’ work,” Barnes says.

From the beginning BCF turned a wide-angle lens on African American choreography. It aimed to showcase the whole range of ages and experiences, with beginning and experienced choreographers, plus youth dancers. The emphasis has always been on the “here and now” of its name, although that doesn’t mean, Ellis explains, “that folks who are rooted in traditional forms and rethink them are excluded.” The festival developed a format of showing one weekend in the East Bay (at Laney College) and in San Francisco (at Dance Mission Theater) with both established artists and what the BCF calls “Next Wave Choreographers.”

A lesser-known yet important part of the festival offers training opportunities for a handful of pre- and post-college students who are interested in theater management, tech, and other backstage responsibilities. Several of them, says Ellis, have been able to enter those fields professionally after completing the program.

For this anniversary season, BCF created its most ambitious schedule yet: four weekends of performances by an impressively diverse group of African American dance artists. A partnership with YBCA enabled the organizers to bring Zimbabwe-born Nora Chipaumire for the Bay Area premiere (Feb. 13-15 at YBCA) of Miriam, a work inspired by singer Miriam Makeba and the Virgin Mary, among others. “Nora has gone on to an international career, yet she started in the Bay Area,” Ellis points out.

On the penultimate weekend (Feb. 28-March 1 at Laney College), former Lines Ballet dancer-choreographer Gregory Dawson has created birdseye view, a sextet set to an original jazz score performed live by the Richard Howell Quintet. Zaccho Dance Theatre will present the Oakland premiere of Joanna Haigood’s haunting Dying While Black and Brown; it looks at the effect of incarceration on the human spirit. Joining the lineup will be a work in progress by Barnes (Feb. 28 only), Haitian Dancer Portsha Jefferson, and spoken-word artist Joseph.

Financial constraints prevented the programming of an accompanying film component this year, though the bitter pill was sweetened by a last-minute arrival: UPAJ, Hoku Uchiyama’s film about the partnership between Kathak artist Chitresh Das and tap dancer Jason Samuels Smith, will screen Feb. 28 at 6:30pm before that evening’s performance.

Looking back, Ellis figures that over the last decade they have presented almost 80 choreographers. So for this year’s special “Next Wave” program (Feb. 21-23 at Dance Mission), they sent out a call to “alumni.” It’s a homecoming for the 21 artists who accepted, and it should be heady mix, running (alphabetically) from Ramón Ramos Alayo to Jamie Wright.

For the ODC Theater finale (March 6-8), Robert Moses has curated an intriguing and somewhat mysterious evening, which includes a premiere of his own, Bliss Kohlmeyer and Dawson choreographing on his company, and Moses acting as a “host” to various choreographers. So far Raissa Simpson, Byb Chanel Bibene, and Antoine Hunter are confirmed, with more to come. *