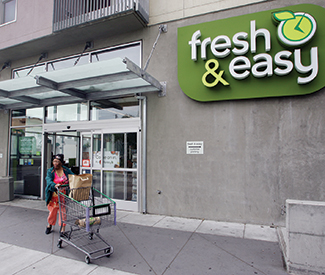 Food stirs strong passions in San Francisco. Protests have been mounted against foie gras and live chicken sales, and epic battles have been fought over chain grocery stores’ proposals to open up shop in certain neighborhoods.

When Whole Foods opened in the Upper Haight in 2011 amid no shortage of neighborhood controversy, Rachel Levin wrote in The Bold Italic that her glee at beholding offerings such as Kombucha on tap belied her nagging conscience about patronizing a chain retailer in an area dotted with local businesses. Internal conflict ensued; the writer confessed feeling “totally conflicted.”

Six months after the Upper Haight Whole Foods flung open its doors to guilt-ridden and guilt-free patrons alike, a different grocery store was welcomed with much fanfare.

Five years had passed from the time when Fresh & Easy Market had agreed to do business in the Bayview to the day it finally opened for business. The store launch, held in late August of 2011, was treated as a celebratory affair — after much involvement by city officials, it marked the first time in 20 years that the low-income community would have a grocery store.

“The opening of Fresh & Easy on Third Street creates jobs for the community and will help make the neighborhood a place where families will want to stay and thrive,” Mayor Ed Lee said at the time.

But just over two years later, Fresh & Easy was closed. Tesco, the British parent company that owned the grocery chain, fell into financial trouble and unloaded its West Coast stores onto an affiliate of Yucaipa companies, headed by Los Angeles billionaire Ronald Burkle. Other San Francisco Fresh & Easy locations survived the transition, but the Bayview store didn’t make the cut.

Now it’s back to square one, and the neighborhood is once again without a grocery store where one can purchase fresh food. That’s especially problematic considering that Bayview residents suffer from diet-related illnesses such as heart disease and diabetes at much higher rates than other city residents.

And ever since Fresh & Easy closed, Sup. Malia Cohen, who represents District 10 where Bayview is located, has discovered that attracting a new grocery retailer to that neighborhood is like pulling teeth.

“Safeway was absolutely closed to the idea,” Cohen reports. “They cited safety concerns.”

When she first contacted Safeway representatives to pitch the idea of having the grocery retailer move into the vacant Fresh & Easy location, their response was to ask her office to track down emergency service call data in the surrounding neighborhood. “They said they couldn’t get the information,” Cohen said. “I said, that’s interesting, it’s public information.”

Safeway also cited concerns about the configuration of the vacant space and the size of the parking lot, Cohen said. She noted that the grocer has shown generosity in the past by making Safeway gift card donations to needy Bayview residents, but “that also presents a challenge. It’s a hike to get to the grocery store.”

Safeway spokesperson Wendy Gutshall did not answer questions about why the retailer was unwilling to consider moving to the area, and wrote in an email to Bay Guardian, “There are no plans at this time with respect to a new location in the Bayview.”

Cohen was frustrated, but undeterred. “I think there’s a certain level of racism and classism that blinds retailers from even exploring these communities,” she said. “I really want the community to be able to have healthy food options — not discounted toss-aways.”

Next on Cohen’s list was Trader Joe’s. “The conversation went well,” she noted, adding that she’s targeting the chain because numerous residents have told her they would shop there. “I’m optimistic — although they did express a desire to be in Noe Valley. Or the Castro.”

Asked whether the company would consider opening a store in the Bayview, Trader Joe’s spokesperson Alison Mochizuki would only say, “At this time, it’s not in our two-year plan to open a location in that area.”

Cohen said she’d also reached out to Kroger, Sterling Farms, and 99 Ranch Market to gauge interest. Meanwhile, nearby Visitation Valley will be getting its own grocery store, with an anticipated opening in June: discount retailer Grocery Outlet.

The closure of Fresh & Easy left some Bayview residents without jobs. Gloria Chan, spokesperson of the Office of Economic and Workforce Development, a city agency that works closely with Mayor Ed Lee, noted that OEWD had “deployed its rapid response team to assist [displaced Fresh & Easy] employees during the transition, and provided information on workforce services including unemployment assistance.”

Investment firm Fortress Investment Group acquired the vacant Fresh & Easy site in December, Chan added. “OEWD reached out to the Fortress Investment Group and expressed interest and the need for ensuring a grocery retail outlet continues to remain in the now vacant location,” she wrote. “OEWD remains diligent in pursuing a grocery retail outlet in the Bayview and have also spoken to various food operators.”

But so far, nothing has fallen into place, and Cohen says the mayor’s office could be offering more support. “We have the density needed to support a store — households, age range, all the qualifying data points,” Cohen said. “I do have my fingers crossed.”