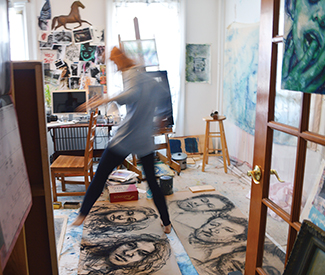 Airbnb, a mainstay of the “sharing economy” that connects hosts with guests for short-term apartment rentals, allegedly flouts city and state regulations across the United States, not just in San Francisco. Unlike our foggy city and sunny state, however, the state of New York has aggressively pursued the tech firm in what can almost be seen as a “tale of two Airbnbs.”

New York Attorney General Eric Schneiderman issued a subpoena to Airbnb last October, demanding information on New York City’s 15,000 hosts and 25,000 listings. The concern? In New York City, it is illegal for a room or apartment to be rented out for under 30 days without a tenant present, the attorney general wrote in the subpoena. Basically, “apartment sharing” without a tenant present is illegal.

Additionally, his office found evidence that few (if any) Airbnb users had paid the city’s hotel tax, a legally required payment that hovers around 14 percent of a hotel’s fees.

Unlike in San Francisco, where little has been done to address the ways in which “apartment sharing” runs afoul of the law, Schneiderman subpoenaed Airbnb’s user data to give his office the information to hone in on how many citizens are skirting local regulations.

Airbnb refused to hand over the numbers. Now it’s headed to court, and oral arguments begin next month. If the attorney general is successful, the public will get its first glimpse into Airbnb’s role in dodging local hotel and rental laws.

Legal issues are just some of the concerns of two first-time Airbnb users, whom we met in Brooklyn, NY, in a Polish neighborhood called Greenpoint.

Roemer’s apartment is beneath Meilandt’s. She’s an artist whose recent trips to Bali inspired her work. Now she wants to go back and help her mentor, Wolfgang Widmoser (who studied under Salvador Dali), to make a film debating different art styles.

Roemer says when she’s in New York, she “busts ass” to make ends meet as an artist.

Subletting her apartment via Airbnb would allow her have an income while she travels, she said. But her landlord, Meilandt, is worried about the legal murkiness in New York around Airbnb.

“Liability, liability, and liability,” he said. Artwork in their shared home exceeds $100,000 in value, which worries him. On its website, Airbnb offers what it calls a “$1,000,000 Host Guarantee.”

“The Host Guarantee is not insurance,” Airbnb clarifies on its website, adding that the guarantee doesn’t cover cash and valuables, including “rare artwork.”

Meilandt is nervous about having a stranger renting for a short period. “My art here [includes] rated collectibles, and Aubrey’s art is also quite valuable.”

Roemer’s work is strewn all over the apartment. Bursts of color depict her co-workers, friends, and also strippers from a local club called Pumps.

Honesty in transactions is at the heart of the New York attorney general’s subpoena of Airbnb.

In San Francisco, housing advocates worry that landlords and tenants have an incentive to reserve space for lucrative, short-term Airbnb rentals, displacing traditional long-time renters and removing rent-controlled units from the market.

Without clear regulations or enforcement, there are few checks in place to stem the consequent loss of affordable housing (see “Residents vs. Tourists” in this week’s issue).

According to the New York attorney general’s subpoena, more than 2,500 complaints submitted to New York City’s Office of Special Enforcement in recent years provide evidence that renters are facing pressure from landlords to vacate, in order to make way for Airbnb guests.

Those landlords see Airbnb as more profitable than long-term tenants.

“Complaints reflect landlords and operators of these illegal hotels pressuring the permanent residents to vacate their apartments so they can pursue the more lucrative transient market. There are reports of landlords withholding heat and other basic services, verbal harassment and illegal eviction,” Schneiderman argued in the subpoena.

Websites with how-to guides have sprung up, including NeedWant.com’s “I BOUGHT OUT AN APARTMENT TO RENT ON Airbnb.” NeedWant.com’s Jon Wheatley, a San Francisco resident, tells his readers they can turn a tidy profit in just four years.

Luckily, Roemer isn’t worried about losing her place from Meilandt. Watching them interact is like watching family, and it’s easy to see why, as their home in Greenpoint straddles a fine line between apartments and a commune. They and the other tenants in the building have an unlocked-door policy, eating meals together like bosom buddies.

“Jeff will be in his robe, playing Bach on his guitar while I paint in my studio. We share everything, we have our own family,” Roemer said. “This is the Brooklyn Tales of the City.”

Airbnb is changing the face of housing in New York City and San Francisco, but in New York, at least, someone is doing something about it.